What We Know About President Putin's New Limo (PHOTOS, VIDEO) 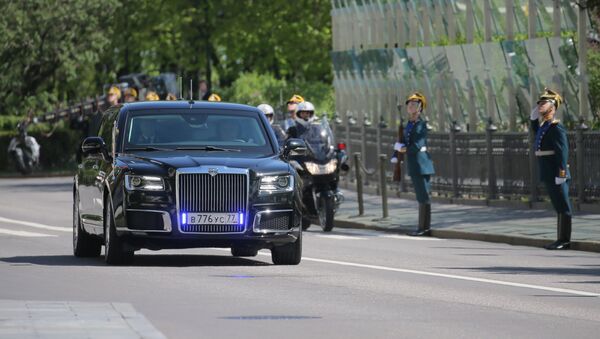 © Photo : Press-service of the Russian President
/
Go to the photo bank
Subscribe
Amid rumors that the premier of the new Kortezh presidential limousine would be delayed, the Kremlin's Special Purpose Garage offered automotive enthusiasts a pleasant surprise, unveiling the new vehicle and showing it cruising down the cobblestone roads of the Kremlin carrying the Russian head of state to his inauguration.

President Putin, inaugurated for a fourth term on Monday, drove the estimated 200m distance from the Kremlin's Senate building to Andreevsky Hall in the brand new Russian-made extended wheelbase limo, rather than his traditional Mercedes S600 Pullman.

During the ceremony, the new limousine could be seen driving through the Kremlin accompanied by nine motorcycle outriders, easily swallowing up light bumps in the road. The vehicle, painted a traditional presidential black, features a large square-shaped chrome grille, rectangular headlights, chrome accents along its windows and rocker panels, an understated rear, and flashing lights emanating from near the license plate.

A Closer Look at President Putin's New Russian-Made Presidential Limousine
The promised premier of the new vehicle for the presidential inauguration ceremony was thought to have been put on hold late last month after minister of industry and trade Denis Manturov told Russian media that Putin may not use the new vehicle during the ceremony after all.

In any case, Manturov promised that the vehicle would be ready for the inauguration, adding that the Special Purpose Garage, a Federal Protective Service detachment responsible for carrying high-level officials, was receiving the new vehicles in accordance earlier agreed deadlines. Aurus limousine of the President of the Russian Federation motorcade, part of the Cortege project
© Photo : Press-service of the Russian President
/
Go to the photo bank

Project Kortezh, officially called the 'Unified Modular Platform', envisions the creation of a family of luxury vehicles, including a limousine, sedan and minivan, based on a single platform. The vehicles, developed by the NAMI State Research Center in cooperation with automotive holding company Sollers, are expected to be marketed under the 'Aurus' brand (a blend of the Latin word Aurum, i.e. 'Gold' – and Rus, Russia). 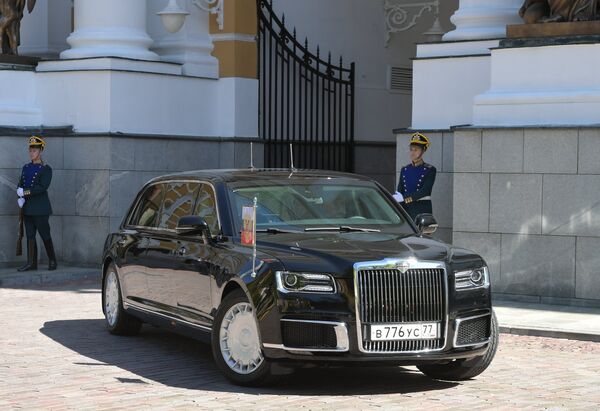 Aurus limousine of the President of the Russian Federation motorcade, part of the Cortege project
© Sputnik / Sergei Guneev
/
Go to the photo bank

Cortege Project: Breakthrough in Russia’s Automotive Industry
Putin's new ride is the first domestically produced vehicle design for a Russian head of state since 1985, when Soviet leader Mikhail Gorbachev was provided with the Zil-41052, a modernization of the Zil-4104 design created in the late 1970s. Gorbachev rejected the Zil-4102, a Cadillac-like design presented to him in the late 1980s, amid concerns that his wife Raisa didn't like it.

Russian President Boris Yeltsin continued to use the Zil-41052 until 1995, when he switched over to an armored Mercedes S-Class, ostensibly out of cost of operation considerations. Presidents Putin and Medvedev continued the tradition of using the German luxury vehicles. 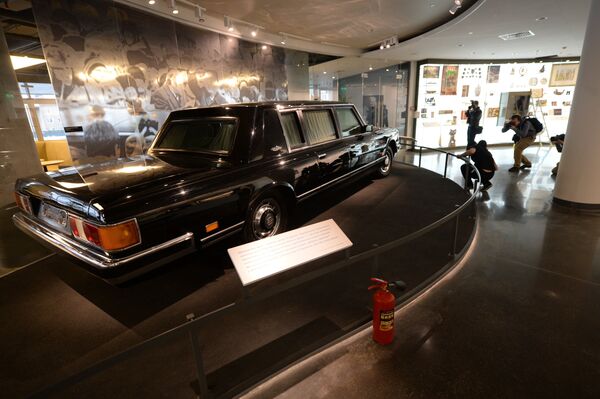 Development of the Kortezh began in 2012, with $197 million invested in the project as of late 2017. In addition to deliveries for top state officials, the vehicles are expected to be made available for sale to the public in small quantities of 250-300 per year starting in 2019, selling between $95,500 and $111,500 apiece. In the Russian automotive world, the Kortezh is envisioned as the rebirth of the country's long-dormant luxury vehicle industry. 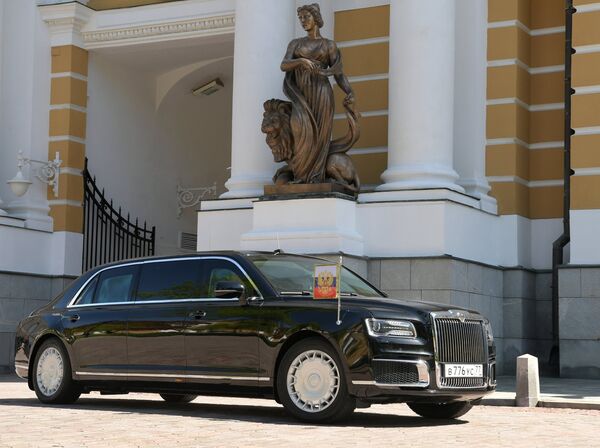 Aurus limousine of the President of the Russian Federation motorcade, part of the Cortege project
© Sputnik / Sergei Guneev
/
Go to the photo bank
000000
Popular comments
'We' must have watched the Inauguration, 'we' would have been impressed,'we' would also have noted the difference , the dignity, the respectability, of the ceremony, ah well, what can we do .... and one is sure that 'we' did watch the whole thing....What a life... to be perpetually unhappy, jealous, bitter, petty....frankly...keep it.
armor
7 May 2018, 21:21 GMT2
000000
what an intelligent post....my word. Stay home in your decadent country. I see wheels 'made in Russia' : well done to the manufacturers. Long live Pres. Putin, readers ignore the trolls.
armor
7 May 2018, 20:39 GMT1
000000
Newsfeed
0
New firstOld first
loader
LIVE
Заголовок открываемого материала
Access to the chat has been blocked for violating the rules . You will be able to participate again through:∞. If you do not agree with the blocking, please use the feedback form
The discussion is closed. You can participate in the discussion within 24 hours after the publication of the article.
To participate in the discussion
log in or register
loader
Chats
Заголовок открываемого материала
Worldwide
InternationalEnglishEnglishMundoEspañolSpanish
Europe
DeutschlandDeutschGermanFranceFrançaisFrenchΕλλάδαΕλληνικάGreekItaliaItalianoItalianČeská republikaČeštinaCzechPolskaPolskiPolishСрбиjаСрпскиSerbianLatvijaLatviešuLatvianLietuvaLietuviųLithuanianMoldovaMoldoveneascăMoldavianБеларусьБеларускiBelarusian
Transcaucasia
ԱրմենիաՀայերենArmenianАҧсныАҧсышәалаAbkhazХуссар ИрыстонИронауОssetianსაქართველოქართულიGeorgianAzərbaycanАzərbaycancaAzerbaijani
Middle East
Sputnik عربيArabicArabicTürkiyeTürkçeTurkishSputnik ایرانPersianPersianSputnik افغانستانDariDari
Central Asia
ҚазақстанҚазақ тіліKazakhКыргызстанКыргызчаKyrgyzOʻzbekistonЎзбекчаUzbekТоҷикистонТоҷикӣTajik
East & Southeast Asia
Việt NamTiếng ViệtVietnamese日本日本語Japanese俄罗斯卫星通讯社中文（简体）Chinese (simplified)俄罗斯卫星通讯社中文（繁体）Chinese (traditional)
South America
BrasilPortuguêsPortuguese
NewsfeedBreaking
18:35 GMTFellow ‘Van Life’ Camper Helps Authorities Locate Gabby Petito’s Body
18:33 GMTWhite House: Biden Hopeful Call With Macron Step to Return US-French Relations to Normal
18:25 GMTFive Held in India’s Karnataka for Asking Dalit Family to Pay Fine After Entering Temple
18:14 GMTFormer Treasury Secretaries Urge That US Debt Limit be Raised 'Without Delay'
18:07 GMTNo Genies in Sight: 'Well of Hell' Sinkhole of Yemen Explored by Cavers
17:42 GMTSaudi King Tells UN General Assembly Yemen's Houthis Reject Peaceful Solution to Conflict
17:35 GMTMessi Was 'Tyrant' to Barcelona Teammates in Training, Claims Manager Ronald Koeman
17:27 GMTInt'l Support Group for Lebanon Urges Government to Take Active Measures to Ease Crisis
17:07 GMTIndia: Anti-Terrorist Squad Arrests Islamic Cleric Over Religious Conversion Charge
17:01 GMT'Would Fire it Onto Ceiling': Prince Philip's Mustard Jokes Landed Him in Trouble With Queen
16:59 GMTREC Group Support for Kamaz Export Projects to Exceed 20 Billion Rubles
16:53 GMTThe Cypriot Caveat: Why Erdogan Shouldn't Call Russia Out on Crimea?
16:43 GMTPoland's PGNiG Says Received Right to Take Part in Certification of Nord Stream 2 Operator
16:39 GMTSotheby’s Puts Frida Kahlo’s Rare 1940 Self-Portrait Up for Auction
16:37 GMTFlash on Jupiter Possibly Caused by 'Alien Bomb,' Blogger Says
16:30 GMTIt's Massage Time: Bulldog Scratches Buddy's Back
16:29 GMTLNA Commander Haftar Instructs Col. Gen. al-Nazuri to Act LNA Head for Next 3 Months
16:20 GMTFrance to Return Ambassador to Washington Next Week After Macron-Biden Phone Call on AUKUS Spat
16:17 GMTWatch Haitian Deportees Throw Shoes at US Officials, Try to Storm Plane in Port-au-Prince
16:07 GMTPorn Actors' Trade Organisation Shakes Hands With Lobbying Firm to Get Protection From Congress