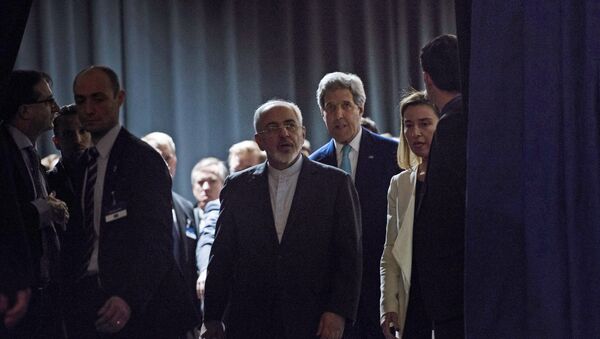 © REUTERS / Brendan Smialowski/Pool
Subscribe
Foreign Minister Mohammad Javad Zarif has confirmed that he met the former US Cabinet Secretary and other influencers beyond the US government in a bid to avert the disruption of the 2015 Iran nuclear deal ahead of the May 12 deadline, when Donald Trump is to decide whether to re-impose sanctions on Iran.

Former US Secretary of State John Kerry remained in contact with ex-counterparts just like every previous US top diplomat because he believes the Iran nuclear agreement must remain in effect, his spokesman said in the statement to Fox News.

"I think every American would want every voice possible urging Iran to remain in compliance with the nuclear agreement that prevented a war."

Kerry thinks the Iran nuclear deal should remain in effect as the states focus on ensuring stability in the region, the spokesman added.

Earlier in the day, Donald Trump has rushed to Twitter to slam former State Secretary John Kerry for what the US President described as Kerry's "Illegal Shadow Diplomacy," commenting on his meetings with Iran's top diplomat, after Foreign Minister Mohammad Javad said he talked to Kerry to find the way out of the growing tensions over the 2015 nuclear accord.

The United States does not need John Kerry’s possibly illegal Shadow Diplomacy on the very badly negotiated Iran Deal. He was the one that created this MESS in the first place!

Donald Trump is threatening to pull out of the agreement, which he has denounced as a flawed deal and a failure of the Obama Administration.

An unnamed official recently told the Boston Globe that Kerry, who took part in forging the Joint Comprehensive Plan of Action (JCPOA) in 2015, had at least two meetings with the Iranian Foreign Minister at the United Nations in the past two months. He has also been in talks with the German and French leaders, as well as EU foreign policy chief Federica Mogherini.

Javad Zarif confirmed this to the news agency ICANA, “During my visit to New York I spoke to people, who are not in the US government now, but used to take part in the negotiations of the Six group [of the Joint Comprehensive Plan of Action]…to present the realities and facts to them.”

According to him, one of these facts is that Iran, unlike the US, abides by the 2015 nuclear accord, adding that if the States walked away from the agreement, it would eventually isolate the US. Referring to his negotiations with Kerry, he stated that the US isn’t “only the White House Administration,” but also a mix of public opinion lobbyists and expert circles, which mold policy. That’s why those who have political standing can influence the process of decision making.

The Iran nuclear deal, known as the Joint Comprehensive Plan of Action (JCPOA,) signed by Tehran and the five permanent members of the UN Security Council – the US, France, Britain, Russia and China – plus Germany on July 14, 2015, imposed strict restrictions on Iran's nuclear program in return for the lifting of economic sanctions.

Throughout his presidency, Donald Trump has repeatedly slammed the agreement, signed by the Obama Administration, as the worst deal in US history. He is expected to announce no later than May 12 whether Washington's overseas allies, the UK, France and Germany, have managed to convince the US President not to scuttle the accord.

Russia also stands for the preservation of the existing deal on the Iranian nuclear program and insists that there is no alternative to it, either.
Bahram Qasemi, a spokesman for Iran's Foreign Ministry, said that Tehran is prepared for all scenarios when Trump decides whether to renew sanctions waivers on May 12. Meanwhile, Javad Zarif said that Tehran's "fierce reaction to the violation of the nuclear deal with the major powers will not be pleasant for the US."