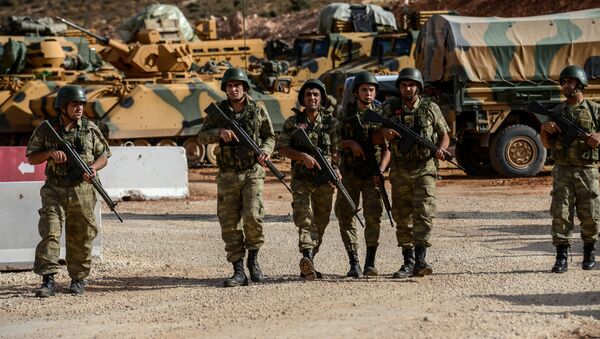 © AFP 2021 / LYAS AKENGIN
Subscribe
Turkey's President Recep Tayyip Erdogan, addressing his supporters in Istanbul, announced his manifesto for the upcoming snap elections in the country, which are due to be held next month.

In the wake of Ankara's Olive Branch Operation, the military offensive in the Kurdish enclave of Afrin in northern Syria, Erdogan promised new Turkish missions in the country.

"We will not give up on constricting terrorist organisations. We will add to the Euphrates Shield and Olive Branch operations. Our soldiers are ready for new missions," the president said.

By late March, the Kurdish-dominated Syrian city of Afrin was fully captured by Turkish military forces; however, Erdogan stated that the advance would not end with the capture of Afrin, noting that the regions of Manbij and Idlib would be the next targets.

Erdogan Aide: Olive Branch and Euphrates Shield Impossible Without Russia
Ankara launched an operation code-named Olive Branch in January, aiming to clear Turkey's Syrian border of Kurdish groups, which it believes to be linked to the Kurdistan Workers' Party (PKK), listed as a terrorist organization by Ankara.

The offensive in Afrin was launched after Ankara ended its seven-month Euphrates Shield military campaign in the province of Aleppo in March 2017. Euphrates Shield was Ankara's first direct military intervention in Syria; the objective was to push Daesh militants away from the Turkish border as well as prevent the advance of local Kurdish groups.

On Prospects of EU Membership

Erdogan pointed out that Turkey had never abandoned its goal of joining the European Union, unlike the country's European counterparts which did not appear to show the same determination on the issue.

EU-Turkey Migrant Deal Led to Overcrowding of Refugee Centers in Greece - UNHCR
Turkey began negotiations on entering the bloc in 2005, 18 years after the country first submitted a membership application. The talks on Turkish EU membership have been repeatedly suspended due to the Cyprus dispute and the resistance of Germany and France, among other obstacles.

In March 2016, the bloc and Ankara agreed on a deal, under which Turkey vowed to accept all undocumented migrants who arrive in the EU through its territory in exchange for Syrian refugees accommodated in Turkey, on a one-for-one basis. The Union promised to accelerate the Turkish EU accession bid, introduce a visa-free regime, as well as provide financial aid to Turkey to cover the costs of taking in asylum-seekers.

000000
Popular comments
More mass murder of innocents, more terrorist support and more resource theft.
The Thoth
6 May 2018, 17:33 GMT1
000000
Newsfeed
0
New firstOld first
loader
LIVE
Заголовок открываемого материала
Access to the chat has been blocked for violating the rules . You will be able to participate again through:∞. If you do not agree with the blocking, please use the feedback form
The discussion is closed. You can participate in the discussion within 24 hours after the publication of the article.
To participate in the discussion
log in or register
loader
Chats
Заголовок открываемого материала
Worldwide
InternationalEnglishEnglishMundoEspañolSpanish
Europe
DeutschlandDeutschGermanFranceFrançaisFrenchΕλλάδαΕλληνικάGreekItaliaItalianoItalianČeská republikaČeštinaCzechPolskaPolskiPolishСрбиjаСрпскиSerbianLatvijaLatviešuLatvianLietuvaLietuviųLithuanianMoldovaMoldoveneascăMoldavianБеларусьБеларускiBelarusian
Transcaucasia
ԱրմենիաՀայերենArmenianАҧсныАҧсышәалаAbkhazХуссар ИрыстонИронауОssetianსაქართველოქართულიGeorgianAzərbaycanАzərbaycancaAzerbaijani
Middle East
Sputnik عربيArabicArabicTürkiyeTürkçeTurkishSputnik ایرانPersianPersianSputnik افغانستانDariDari
Central Asia
ҚазақстанҚазақ тіліKazakhКыргызстанКыргызчаKyrgyzOʻzbekistonЎзбекчаUzbekТоҷикистонТоҷикӣTajik
East & Southeast Asia
Việt NamTiếng ViệtVietnamese日本日本語Japanese中国中文Chinese
South America
BrasilPortuguêsPortuguese
NewsfeedBreaking
15:44 GMTIsrael Will Reportedly Push US to Strike Iranian Facility Amid Lack of Progress in Vienna Talks
15:41 GMTAmerica Unveils First-Ever Strategy to Battle Corruption at Home and Abroad
15:30 GMTChina May Build Military Base in Equatorial Guinea Amid Beijing’s Tensions With Washington
15:15 GMTKremlin: Putin Will Listen to Biden's Proposals on Ukraine 'With Great Interest'
15:15 GMTNYC to Use 'Preemptive Strike' Against Omicron With Vaccine Mandate for all Businesses, Mayor Says
15:08 GMT3,000 Security Officers Guard India's Mathura as Hindu Group Threatens to Install Idol in Mosque
14:59 GMTAmid Rumours of US Boycott of Beijing Olympics, How Could the Move Affect the Games?
14:52 GMTUK Policing Minister Not Surprised Over Reports of Drug Use in Parliament Building
14:45 GMTLabour Unions Protest in Brussels Against Low Wages, Expensive Electricity - Photos
14:26 GMTSpanish Court Rules Employee Can be Fired for Job Abandonment During Pandemic - Reports
14:18 GMTAnger and Shock After Intruders Vomit and Urinate at Site of Manchester Arena Bombing Memorial
14:15 GMTUS, UK, Canada Concerned by Tigrayans Arrested Without Charge in Ethiopia
14:07 GMTLionel Messi, Neymar or Himself: Kylian Mbappe Reveals Who's 'Boss' at Paris Saint-Germain
13:58 GMTFormer Indian Shia Leader Embraces Hinduism After 'Death Threats From Muslim Groups'
13:48 GMTMarine Le Pen Accuses EU of 'Playing Role of Firefighter-Pyromaniac' in Ukraine-Russia Tensions
13:47 GMT'Happy a Team Like Barcelona is Interested in Me', Says Salah Amid Liverpool Contract Impasse
13:30 GMTEarth is Getting Its Own Black Box That Will Tell What Caused Humanity's Demise
12:58 GMTChina Says Plots to Thwart Ties With Solomon Islands 'Doomed' as PM Survives No-Confidence Vote
12:53 GMTPutin in Meeting With Modi, Discusses Drug-Trafficking, Terrorism and Situation in Afghanistan
12:46 GMTSri Lanka Demands Compensation From Pakistan Over Brutal Mob Killing of Factory Manager