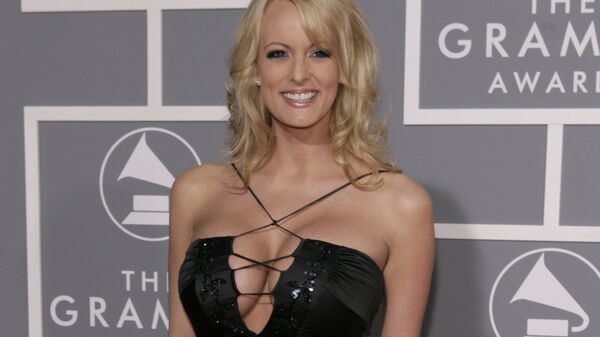 Stormy Daniels, an American pornographic actress and director who became embroiled in a scandal involving her alleged affair with Donald Trump, showed up on the hit US TV comedy show Saturday Night Live to take a pot shot at the nation's leader.

SNL viewers were in for a surprise when Stormy Daniels appeared as herself in a sketch featuring Alec Baldwin and Ben Stiller portraying US President Donald Trump and his personal attorney Michael Cohen, respectively.

"I know you don't believe in climate change, but a storm's a-coming, baby," Daniels said, directing her remark at Baldwin’s Trump.

The sketch apparently resonated with many viewers who praised the actors and the message they conveyed.

I only wish I could be a fly on the wall in the room where Trump is when he sees this masterpiece.

Stormy's a pretty good actress. Good for her! pic.twitter.com/rg8iXbcci6

I loved this so much. They pulled out all the stops on this one.

​Others, however, weren’t amused with the sketch, arguing that it wasn’t particularly funny and sometimes even criticizing the show itself.

This show is so bipartisan its not even funny anymore. Ever since Will Ferrell left it went down hill. Way too political….

I'm going to disagree here.
SNL could be doing way more hard hitting sketches about Team Treason.
Instead, they go for the easy, obvious jokes.
Stormy shouldn't even appear on the show…it only takes away from the seriousness of this.
Jokes are cool but….FOCUS PEOPLE! pic.twitter.com/svrUyZrlKF

Just proves Daniels is in it for the attention and fame

Well now you know why @StormyDaniels came back besides for more Money & Fame she could not wait to make it on @nbcsnl! @CNN has finally new sound bites for next week to run 24/7! I guess the lady in distress accusations are out the window! 🙄 Always said it was a #Circus 😀 pic.twitter.com/rdMhfJ6xNL

​Daniels, whose real name is Stephanie Clifford, became the focus of media attention last year after she claimed that she had an affair with Donald Trump in 2006, and that during the 2016 presidential election campaign he paid her and had her sign a non-disclosure agreement to keep her lips sealed.