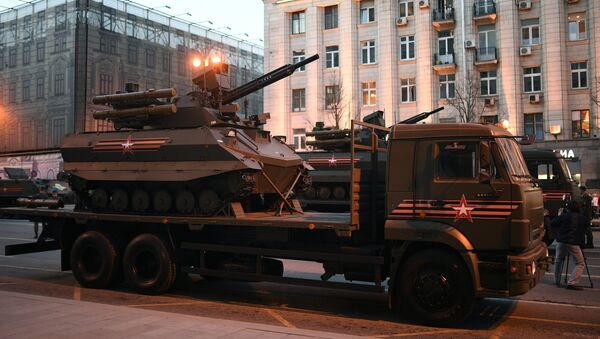 © Sputnik / Vladimir Astapkovich
/
Go to the photo bank
Subscribe
Moscow is gearing up to hold a massive parade dedicated to the anniversary of the Allies' victory against the Nazis in the European theater of World War II. As tradition dictates, the Russian military will show off some of its latest and greatest hardware. Sputnik rounds up the top six pieces of military equipment to keep an eye on.

Up in the Sky

Among the 70+ aircraft set to take part in the aerial portion of this year's parade is a pair of Sukhoi Su-57 stealth fighter jets, which will be making their parade debut. The stealth air superiority fighter, presently in the final stage of pre-production flight-testing, has undergone combat trials in Syria. Packed with state-of-the-art avionics and an active airborne phased array radar, the supermaneuverable aircraft can be fitted for a variety of air-to-ground and air-to-air missiles, including cutting-edge systems developed specifically for the fifth-gen plane. In addition to its internal weapons compartments for stealth mode, the Su-57 has with six external hard points, theoretically allowing it to carry the BrahMos anti-ship and land-attack cruise missile.

Also making its premier at this year's parade is the Kinzhal ('Dagger'), a hypersonic missile designed to be able to penetrate all existing and prospective enemy air defenses. Carried by the MiG-31 supersonic interceptor fighter, the Kinzhal has a range of over 2,000 km, flies at Mach 10, and is capable of maneuvering at all stages of flight. The system is nuclear-capable. Russian President Vladimir Putin revealed the existence of the Kinzhal, already delivered into the military, alongside five other strategic weapons designed to preserve the global strategic balance, at a speech before lawmakers in early March. 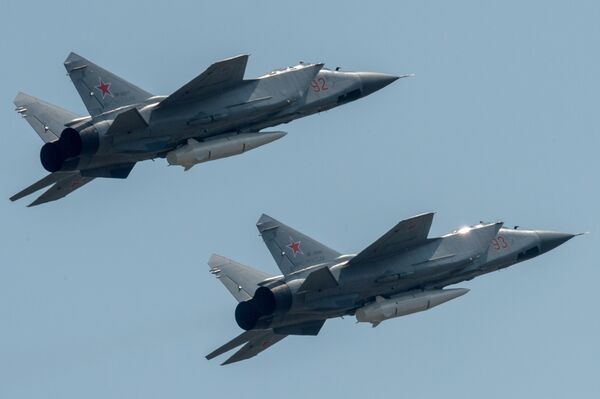 MiG-31s fitted with Kinzhals rehearsing for the Victory Day Parade outside Moscow.
© Sputnik / Vladimir Sergeev
/
Go to the photo bank
Hasta La Vista, Baby
Also making its debut on Red Square this year is the BMPT Terminator, an armored fighting vehicle designed and produced by Uralvagonzavod, the Nizhny Tagil-based armor manufacturer best known for its main battle tanks. On its MBT chassis are four Ataka anti-tank missile launchers, two 30 mm autocannons, two grenade launchers, and a coaxial 7.62 machinegun. Like much of the new equipment in this list, the Terminator has seen testing in the campaign against the jihadists in Syria. 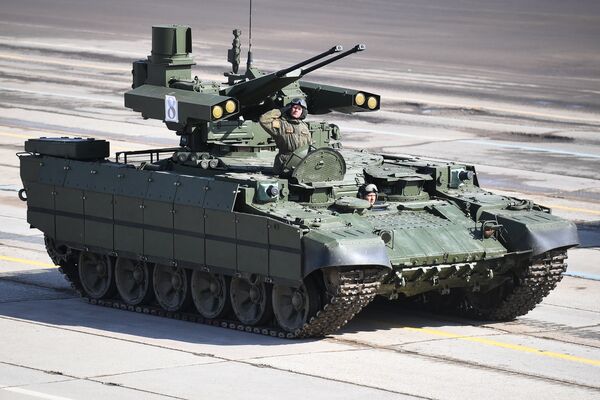 A Terminator armored fighting vehicle during a Victory Day Military Parade rehearsal at the Alabino military training ground in the Moscow Region
© Sputnik / Ramil Sitdikov
/
Go to the photo bank
Robots on Red Square
This year's parade will also see the debut of a whopping four new unmanned combat systems – the Uran-6 and Uran-9 unmanned demining and combat vehicles, and the Korsar and Katran unmanned aerial vehicles.
The Uran-9 is developed and produced by JSC 766 UPTK, a Moscow-region company specializing in high-tech military equipment. The robotic combat system is designed to conduct reconnaissance and fire support for recon units and frontline combined-arms formations. Controlled remotely from a mobile command point, the Uran-9's purpose is to increase combat effectiveness while reducing personnel losses, particularly in urban combat environments. The tankette, which has undergone testing in Syria together with its Uran-6 mine-clearing robot cousin, is capable of attacking enemy armor, personnel and hard points with its complement of anti-tank missiles, rapid-fire cannons or even flamethrower weaponry. 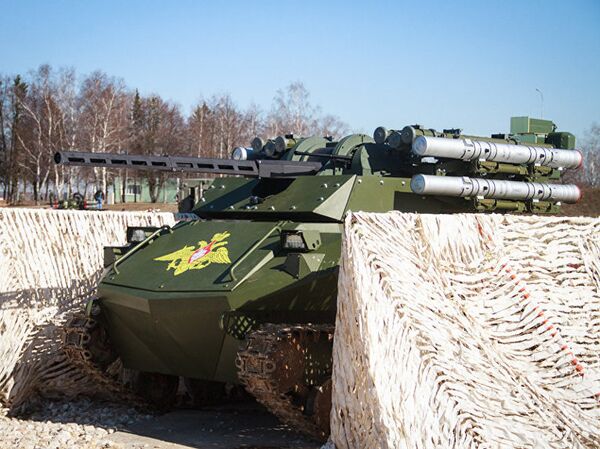 The Uran-9 system
© Photo : Rosoboronexport
Joining the ground-based robotic systems is the Korsar UAV, a round-the-clock, all-weather drone designed for surveillance, real-time target acquisition, battle damage assessment and the delivery of light cargoes to ground forces. A tactical level drone, the Korsar is capable of operating up to 100 km from its command center. Like the tankettes, this UAV, whose development has long been shrouded in secrecy, has been baptized by fire in Syria. 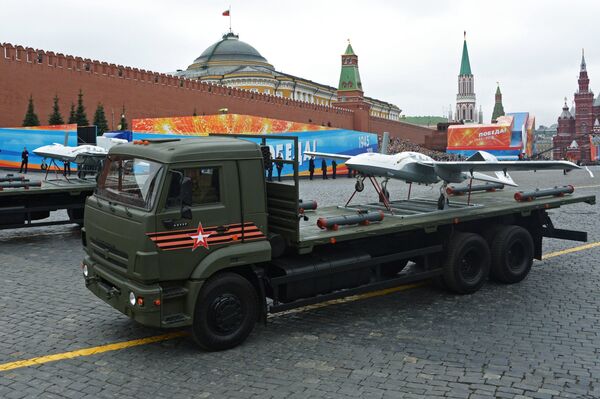 Korsar drones at the final rehearsal of the military parade on Red Square, devoted to the 73rd anniversary of Victory in the Great Patriotic War
© Sputnik / Ilya Pitalev
/
Go to the photo bank
Rounding out the new robotic equipment is the Katran, a helicopter drone with unparalleled thrust, flight time and payload characteristics in its class. The all-weather device can carry a variety of equipment, allowing it to serve as a reconnaissance or electronic warfare platform, or carry out strikes using both guided and unguided munitions. The maneuverable drone can ascend to a height of up to two km, and zoom along at 130 km per hour. The Katran has a useful payload capacity of 120 kilograms. 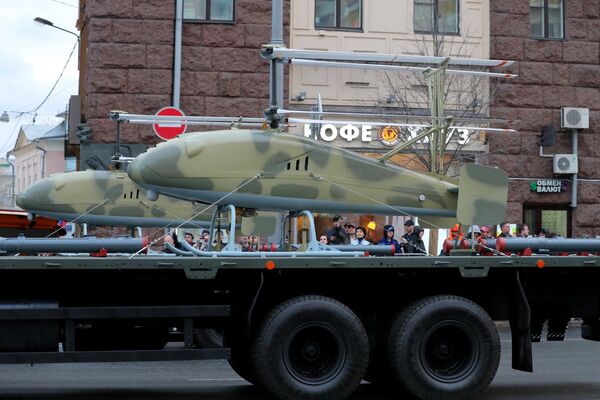 Russia's Katran tactical surveillance unmanned helicopter before the rehearsal of the military parade on Red Square to mark the 73rd anniversary of the Victory in the Great Patriotic War
© Sputnik / Vitaliy Belousov
/
Go to the photo bank
While the above systems will surely take all the glory, other debuting cutting edge systems to watch out for at the 2018 Victory Day parade include the Tor-M2 surface-to-air missile system, Patrul MRAP vehicles, Ural-432009 6x6 trucks, and GAZ Tigr infantry mobility vehicles in the National Guard color scheme.
Newsfeed
0
New firstOld first
loader
LIVE
Заголовок открываемого материала
Access to the chat has been blocked for violating the rules . You will be able to participate again through:∞. If you do not agree with the blocking, please use the feedback form
The discussion is closed. You can participate in the discussion within 24 hours after the publication of the article.
To participate in the discussion
log in or register
loader
Chats
Заголовок открываемого материала
Worldwide
InternationalEnglishEnglishMundoEspañolSpanish
Europe
DeutschlandDeutschGermanFranceFrançaisFrenchΕλλάδαΕλληνικάGreekItaliaItalianoItalianČeská republikaČeštinaCzechPolskaPolskiPolishСрбиjаСрпскиSerbianLatvijaLatviešuLatvianLietuvaLietuviųLithuanianMoldovaMoldoveneascăMoldavianБеларусьБеларускiBelarusian
Transcaucasia
ԱրմենիաՀայերենArmenianАҧсныАҧсышәалаAbkhazХуссар ИрыстонИронауОssetianსაქართველოქართულიGeorgianAzərbaycanАzərbaycancaAzerbaijani
Middle East
Sputnik عربيArabicArabicTürkiyeTürkçeTurkishSputnik ایرانPersianPersianSputnik افغانستانDariDari
Central Asia
ҚазақстанҚазақ тіліKazakhКыргызстанКыргызчаKyrgyzOʻzbekistonЎзбекчаUzbekТоҷикистонТоҷикӣTajik
East & Southeast Asia
Việt NamTiếng ViệtVietnamese日本日本語Japanese中国中文Chinese
South America
BrasilPortuguêsPortuguese