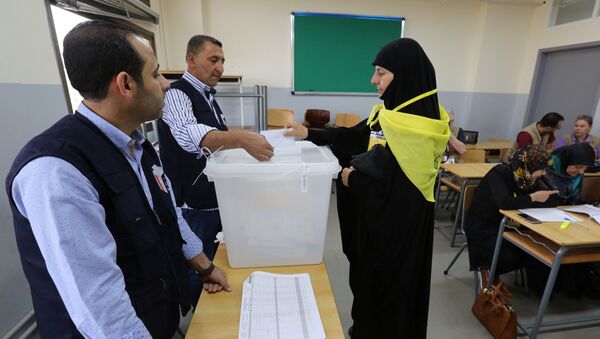 © REUTERS / Aziz Taher
Subscribe
MOSCOW (Sputnik) - Parliamentary elections will be held in Lebanon on Sunday, voters will decide on the fate of all 128 seats in the country's legislature.

Until now, the March 8 Alliance group, including Hezbollah, has held 52 seats, while March 14 Alliance has had 50 seats.

Current Prime Minister Saad Hariri belongs to the Future Movement and is the leader of March 14 Alliance.

Spy Games: Israeli Military Device Reportedly Found on Lebanon Border
Lebanese citizens, for the first time since 2009, will be able to vote in the parliamentary elections after the current parliament extended its term three times under the pretext of political instability.

Throughout the day, elections around the country will be undertaken amid increased security measures. The forces of the Ministry of Internal Affairs and regular army units have been tasked with keeping the peace at polling booths.

As many as 583 candidates were nominated for the 128 seats in the parliament, which are distributed according to the ethno-confessional principle between 11 groups. For example, Sunni Muslims and Shiite Muslims have 27 seats each, and Maronite Christians — 34 seats.

Throughout the Election Day, security measures are tightened across the country. The order is provided both by the forces of the Interior Ministry and the army units.

Thus, according to the rule of the "Majority" it was impossible to distribute the parliamentary seats evenly among the parties, and this method prevented independent candidates and representatives of small political movements from entering the parliament.

In June 2017, the election law was amended. The parties agree among themselves and draw up lists with the number of candidates corresponding to the number of mandates in the region, with unlimited number of lists allowed. People vote for certain candidates, but their votes go the entire list in which this candidate is represented. When counting votes, mandates are distributed among the lists — the more votes the list has collected, the more candidates from the list will be elected to parliament. At the same time, the distribution of mandates upon confessional principles remains within each region.

According to a number of experts, there will be no big changes due to these amendments, as Lebanon is tacitly divided in accordance with the confessional principle. In the south of the country, most of the residents are Shiites who traditionally vote for candidates from the Hezbollah and Harakat Amal parties, the Sunni Muslims supporting the Mustakbal party led by incumbent Prime Minister Saad Hariri constitute a majority in the cities of Saida in the south and Tripoli in the north.

Possible tension and any changes can occur in the regions of Bekaa and Hermel, where Hezbollah has been traditionally favored, but opposing political forces actively try to lobby their candidates using new rules, as they hope to weaken the influence of the pro-Iranian party.

More than 70 lists have been compiled throughout Lebanon, but they are divided unevenly among 15 regions.

Another novelty of the law on parliamentary election was the early voting organized for citizens living abroad for the first time in the country's history. This opportunity was provided on April 27 and April 29 to 82,000 registered Lebanese citizens in 40 countries worldwide.