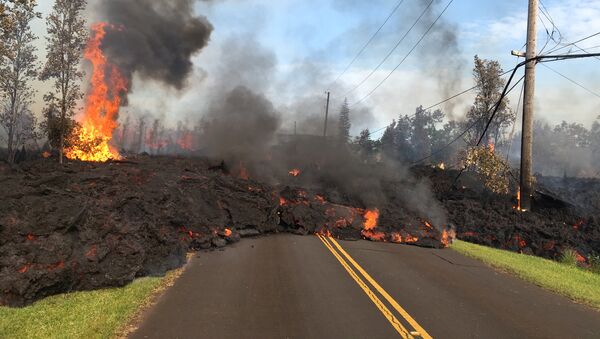 Lava flows from the erupting Kilauea volcano reached the houses on the largest of the Hawaiian Islands. Most residents were evacuated, but some of them refused to leave their homes.

The eruption of the Kilauea volcano has entered an active phase and become a real disaster for the inhabitants of Hawaii's 'Big Island'. According to CNN, the authorities have evacuated 1,700 people, but some of them refused to leave their homes, believing that the danger would pass them.

Volcanologist Wendy Stovall of the US Geological Survey believes that Hawaiians are at great risk, since the concentration of sulfur oxide in the atmosphere could reach a critical level.

"I felt like the whole side of our hill was going to explode. The earthquake was what made us start running and start throwing guinea pigs and bunnies in the car," local inhabitant Tesha 'Mirah' Montoya said as quoted by the Daily Mail.

Breathtaking photo taken in Hawaii of lava spewing out of the ground today. This is a result of an ongoing volcano eruption on Hawaii’s Big Island.

At the same time, erupting lava has already reached the city and began to destroy buildings and local infrastructure. It is reported the destruction of at least five houses.

The mixture of toxic gas, lava flows and earthquakes has put locals on edge; people are being warned that the aftershocks could continue for weeks or even months.

The island of Hawaii is located in the archipelago and US state of the same name, and is locally known as the 'Big Island'. Despite being the largest island in the archipelago, it has a population of less than 200,000; its population is approximately a fifth that the state's most populous island, Oahu, where the state capital Honolulu is located. The Big Island is home to Kilauea, one of the world's most active volcanoes.