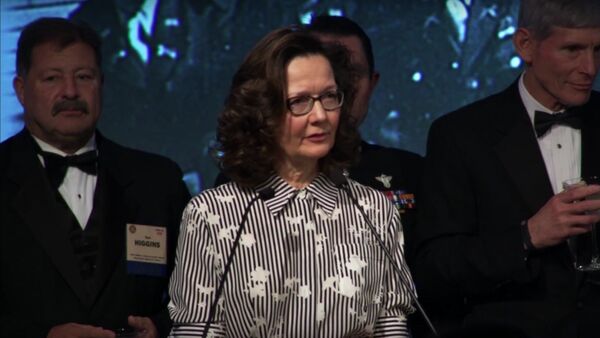 © Photo : YouTube/The OSS Society
Subscribe
International
India
Africa
US President Donald Trump's nominee to lead the Central Intelligence Agency, Gina Haspel, tried to withdraw in order to avoid a fiery debate at a hearing on her role in the agency’s notorious torture scandal.

Several unidentified senior US officials told The Washington Post that Haspel was worried that the increasing scrutiny over her role in the agency's interrogation program would tarnish her reputation and that of the CIA, the newspaper reported on Sunday.

According to the officials, Haspel offered to step aside when she was summoned to the White House on Friday to face questions on her involvement in the CIA's controversial interrogation program that employed techniques, including waterboarding, widely condemned as torture.

Newly-Declassified Records Confirm CIA Director Haspel Supervised Torture
She reportedly told White House aides she would be willing to withdraw to avoid a grueling Senate Intelligence Committee confirmation hearing on Wednesday that would damage the already compromised reputation of the CIA.

She was reassured by staffers, however, that her nomination was still on track and was talked out of withdrawing. By Saturday afternoon, she was said to have pledged to continue with her nomination.

CIA Can ‘Selectively’ Share Secrets With Pet Reporters Without Challenge
Haspel oversaw the interrogation of a detainee at a secret US prison in Thailand who was waterboarded 83 times in a single month. She also reportedly participated in the destruction of videos of interrogations using techniques which have since been formally labeled torture and outlawed by Congress.

Haspel's nomination has been publicly supported by many lawmakers, including Senator Dianne Feinstein (D-CA) who headed the Senate committee that released the infamous CIA torture report against her.

Feinstein told reporters in March that she hoped that the agency learned its lessons and noted that Haspel was "a good deputy director of the CIA."