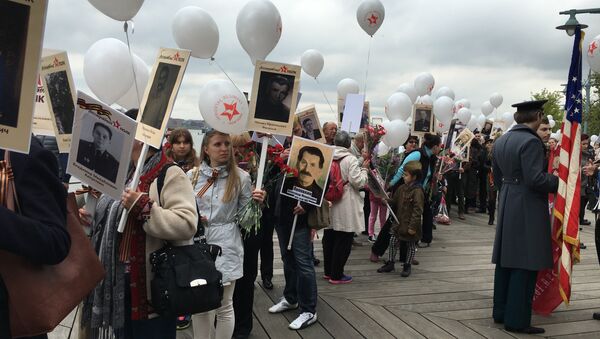 The first marches of people holding the portraits of their relatives who had fought in the war were held on Saturday on the East Coast.

The marches will be held in more than 20 US cities this year. The largest event is in New York, where it has now been held for four years in a row.

FBI Agents Visited Organizers of 'Immortal Regiment March' in Seattle
Over 1,000 people came to the Hudson River with portraits of their relatives.

"More people are coming every year. Last year, we had up to 1,500 people. We are counting people by the amount of signs with photos that we help to print, and white balloons. Last year, we prepared 1,500 white balloons and gave them all away. This year, we took 2,000 [balloons] and prepared 400 more new signs," Igor Kochan, a representative of the organization "Russian Youth in America" told Sputnik.

The participants walked up to the Battery Park memorial to the soldiers who died in the World War II.

The marches are usually held on last Saturday before May 9, when the Victory Day is celebrated in Russia and other countries of the former Soviet Union.

On Saturday, the marches are held in Boston, Denver, New York, Phoenix, Washington. On Sunday, there will be marches in Chicago, Detroit, Houston, Orlando, Philadelphia, San Francisco, San Diego, Seattle, Tallahassee. A march in Miami will take place on Wednesday.