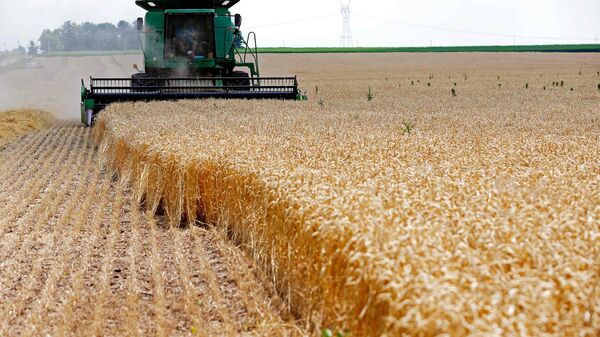 A pair of agriculture activists Tristan Quinn-Thibodeau and Chris Coxon told By Any Means Necessary on Radio Sputnik how US farming policy gives primacy to big agriculture, squeezing out small farmers and wreaking environmental havoc on fields and communities.
https://www.spreaker.com/user/radiosputnik/american-corporations-destroy-land-and-f

Coxon, director of communication at ActionAid USA, told hosts Eugene Puryear and Sean Blackmon that the organization is an international one, "working with millions of different farmers around the world." He and Quinn-Thibodeau, biofuels, land rights and food security campaigner at the same organization, have two forthcoming documentaries: "The Mighty Buck" and "Get Big or Get Out."

"One of the things that we see in many places are the impacts of this industrial model of agriculture, say, in many of the communities where we were working people are being forced off their land; there's big environmental destruction," Coxon said.

In their films, Coxon said, they "wanted to show this isn't something that is unique to countries like Brazil, Guatemala or, you know, the African continent — it's something that's really happening in the US as well."

The film takes a deep look at the impacts of industrialized agriculture and "looking at the solutions farmers want to see for the farm crisis that they're experiencing at the moment," Coxon said. He and his team worked with farming organizations across the US to understand the issues facing local farmers and effect change.

Former US President George W Bush's 2005 mandate on biofuels have been devastating to farmers, the pair suggests. The mandate perpetuates the industrial model of agriculture, Coxon said, and is "really behind this big increase in corn production."

The US' Renewable Fuel Standard requires that fuel sold in the US contain a minimum amount of renewable fuels. That's driven up the costs of corn, making it difficult for small-time farmers to get by without growing it.

"So we visited farmers in Iowa, members of the National Family Farm Coalition, and we talked to them. We said: ‘You know, 10 years after this policy, how are you doing?'" Quinn-Thibodeau said. "The fact was, you know, rural communities are disintegrating, rural economies are dying, there's no small business… the number of farmers keeps decreasing every year. The water is polluted, the soil is polluted and the fact is that these kinds of policies — these biofuels policies, but a variety of different farm policies — don't work for farmers because they don't challenge the underlying sort of control that agribusiness has, and there's an underlying farm policy that privileges the interests of agribusiness over the interests of farmers."

Quinn-Thibodeau explained to By Any Means Necessary how that scenario plays out in Iowa. "What agribusiness wants is to have as much grain, let's say, as much corn, as much soybeans as possible at the cheapest price possible. And this allows them to produce their processed food or their animal feed or whatever it is and… when they buy it for cheap they can, you know, sell whatever they're selling or make the biggest markup, but it also allows them to dump the grain on other countries, undercut other farmers and control those markets. It's really a monopoly strategy."

That has really changed farming practices, especially in big farming states like Iowa, which used to grow a much wider variety of crops. But now, "if you have a land you have to grow corn or soybeans. One, because that's what farm policy kind of dictates… if you're in Iowa and you're trying to grow, you know, kale or something like that, you're not going to get any government support. You need to grow corn or soybeans and that's what the market is. That's the only thing you can sell and get money for and it's because these companies — that's all they want to buy."

"One of the first people in the in the film, she says: ‘You know when you when you drive through Iowa, you know, this is all beautiful but in reality underneath there's some really, you know, kind of catastrophic things happening to the environment,'" Quinn-Thibodeau recalled.

"It's a really beautiful area, but you only need to talk to the farmers to hear that underneath it all, you know, you've got soil that's being massively degraded. You've got water going to the streams and the lakes and the rivers; the water quality is among the worst in the country."

Quinn-Thibodeau said it's important to understand how companies work with farmers and to make a distinction between the interests of farmers and that of big agriculture. "The grain traders, they buy what farmers produce and they're trying to push farmers to produce as much as possible for as cheap as possible because then they can buy it for the lowest price. It's basically, you know, Wal-Mart strategy, trying to put as much pressure on their suppliers [as] possible to get the cheapest price so they can then retail it for as, you know, the cheapest price and undersell their competition."

Then, you have companies on the other side like Monsanto, who sell to farmers, "and they're trying to charge as much as possible for the farmers so farmers are getting squeezed at both ends," Quinn-Thibodeau said. America is also overproducing. Schemes like the biofuels mandate are meant to "sop up all this excess production and what it does is it depresses prices, which allows agribusiness to control more and more markets and it puts farmers, you know, in the squeeze and they have to, you know, brace economies of scale and farm more land just to make ends meet."