When Technology is Prosecution's Star Witness: US Murder Case Solved by Fitbit 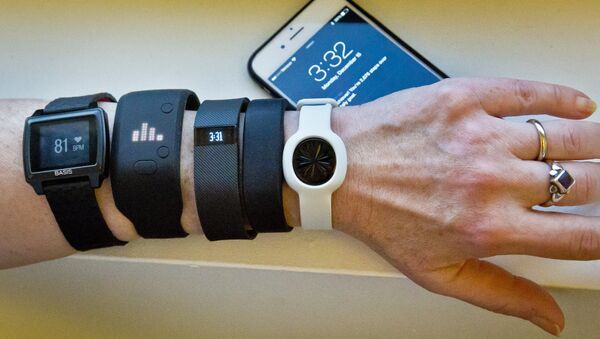 © AP Photo / Bebeto Matthews
Subscribe
George Burch is facing a life sentence for murdering a woman in the United States. The trial hinged around evidence from a Fitbit device and is just the latest case to have revolved around silent testimony from high tech gadgets.

When Nikki Van der Heyden was murdered while on a night out in Green Bay, Wisconsin one of the key suspects was her boyfriend Doug Detrie.

But Detrie had an alibi — his Fitbit device suggested he was asleep in bed at the time of the murder.

This evidence helped convince the jury that Detrie had nothing to do with it and the real killer was George Burch, who was convicted in murder and will be sentenced on Friday, May 4.

Nikki, who was 31 and had three young children, was strangled and beaten as she returned home after a night out with friends and prosecutors say she was also raped.

She was accosted only yards from her home.

Detectives deduced that her body had been dumped in a farmer's field at 3.58am on the morning of May 21, 2016.

#Georgeburch claimed he was having sex with Nikki when she laid in back seat of SUV, but with his butt standing outside, when he suddenly was struck from behind. That was the only scenario he could think of where it was possible to be hit. Beyond absurd.

At the trial Burch claimed he had consensual sex with Nikki in his SUV outside her house. He claimed Detrie spotted them from his bedroom window, ran down, knocked Burch out and then murdered Nichole and dumped her body.

Fitbit Flex Told Its Own Story

But Detrie had been wearing a Fitbit Flex at the time and evidence from it made it clear he was at home asleep in his bed at the time.

Evidence from Burch's cellphone and from Google Dashboard helped detectives work out that he was in the vicinity of where the body was dumped at exactly the right time.

Burch will receive an automatic life sentence for first degree intentional homicide — Wisconsin does not have the death penalty — but Judge John Zachowski has the discretion to say he could at some date in the future be eligible for parole.

The judge sentencing Burch has been sent 26 letters by members of the public urging him not to show any mercy to the killer.

One of the letters describes Burch as "perverse, psychopathic, sociopath" and another said Burch's attempt to pin the murder on Detrie — who is the father of Nichole's youngest son — was a "concocted, ridiculous story."

A Fitbit is a device worn on the wrist which tracks the wearer's activities and is designed to help them keep fit and active.

Another murder case involving Fitbit evidence is expected to come to trial later this year.

Richard Dabate is accused of murdering his wife Connie at their home in Ellington, Connecticut.

Connie's Fitbit indicated her body had not moved since 10.05am on the morning she died, an hour after Dabate told police she had been killed.

Facebook records showed she posted three videos at 9.46am and the house's alarm system records showed movements in the house which contradicted Dabate's version of events.

Several other murder cases in recent years have also forced detectives to trawl through the records of high tech devices and apps.

In April 2011 Qian Liu, a 23-year-old university student in Canada, was chatting to a former boyfriend in China on a Skype-style voice over internet protocol (VoIP) when she was attacked by an intruder, Brian Dickson.

Dickson, who had an obsession with violent Asian pornography, was jailed for life in 2014, partly as a result of evidence from Xian Meng, who watched the attack in Ontario on his webcam in Beijing.

Last year Amazon refused to handover evidence from one of their Echo devices after detectives in Arkansas demanded it, believing it might hold the key to the death in 2015 of Victor Collins.

James Bates eventually voluntarily agreed to hand over the data from his device — which is famously triggered by the word "Alexa" — and a murder charge was later dropped.

Schoolgirl's Killer Contacted Her on App

Later this month David Eisenhauer, 20, is due to be sentenced for the murder of a 13-year-old in a case which centers on the use of the smartphone app Kik.

Eisenhauer reportedly lured Nicole Lovell into an inappropriate relationship and then killed her after contacting her using the app, which masks the user's real identity and is often used for anonymous hook-ups.