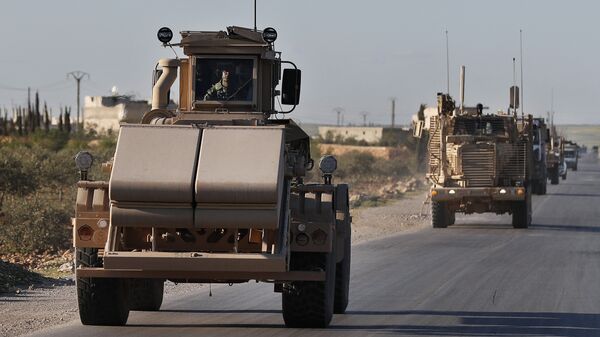 Amid reports coming from Syrian Democratic Forces (SDF) about the growing French military presence in the area of Manbij in Syria, Sputnik has received a photo providing further evidence for the report.

Sputnik has received a photo showing two armored vehicles with military personnel in the area of the Sajur River in the territory of Manbij. One vehicle has a US flag on it, while the other has a French flag.

​“Recently the French military arrived in Manbij. Now they are busy building a military base in the north of Manbij. They are increasing their presence in the region in order to prevent a possible operation from the Turkish Armed Forces and the units of the Free Syrian Army,” the senior member said.

US Halts Funding for White Helmets in Syria – Reports
He went on to say that the French military are constantly patrolling the Sajur River area.

“While on duty, they use armored vehicles, on which the French flag is visible. There are about 50 French military forces on the border of Manbij,” he added.

Earlier it was reported by commander of the Military Council of Manbij Muhammed Ebu Adil that a US-French joint military contingent had arrived at the border.

According to reports, only 250 French soldiers are based in the regions controlled by the SDF north of Syria in Kobani, Tabka, Raqqa and Deir-ez-Zor.