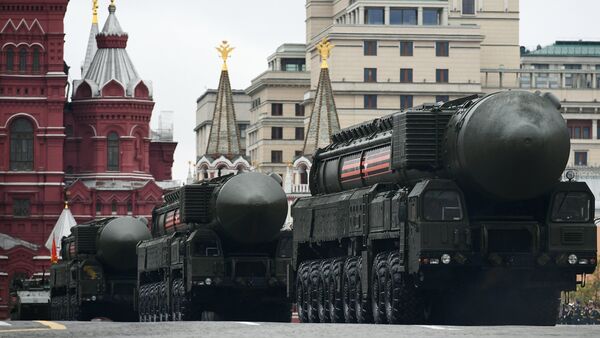 With East-West tensions reaching a boiling point, Russia relies on its formidable arsenal of next-generation weapons to defend itself against any potential aggressor.

The Kinzhal missile, presented by President Putin during his annual address to parliament in March, can travel at 10 times the speed of sound and overcome all existing missile defense systems to take conventional charges up to 2,000 kilometers (1,242 miles) away.

MoD: Russia's Newest Hypersonic Missile Capable of Destroying Aircraft Carriers
The Kinzhal missiles, which name is aptly translated from Russia as “Dagger,” are a lethal weapon that can be used against enemy aircraft carriers, destroyers and cruisers. There is a battery of Kinzhal missiles currently deployed in a test mode in Russia’s Southern Military District.

Other types of future weapons will also be on display, including the Tor-M2 missile-gun systems, Terminator fighting vehicles, Uran-6 and Uran-9 fighting robots, modern drones, quadricycles and snowmobiles.

Visitors of the May 9 Victory Parade on Red Square will also have a chance to watch overflights by the Su-57 PAK FA fifth generation fighter jets,  Su-30SMs and MiG-29SMTs, as well as Tu-160 and Tu-95MS strategic bombers, Tu-22M3 long-range bombers and other military  aircraft.

Speaking at a teleconference on Thursday, Sergei Shoigu said that a total of 190 units of next-generation weapons systems forming the modern state of the Russian Armed Forces will be showcased during the annual Victory Day Parade.

During his state-of-the-nation address to the Federation Assembly on March 1, President Vladimir Putin touted Russia's new advanced strategic weapons, including the Sarmat intercontinental ballistic missile and the Avangard hypersonic system.

Russia is also developing a nuclear warhead small enough to be carried by cruise missiles.