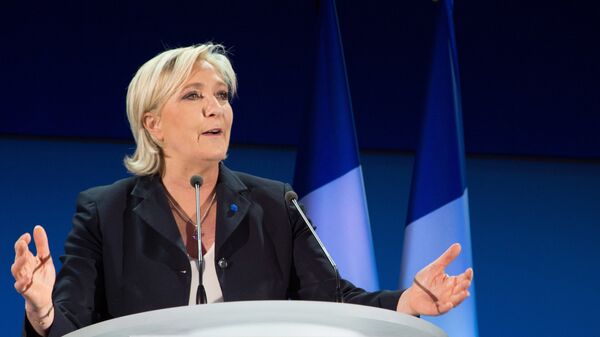 PARIS (Sputnik) - French right-wing National Front (FN) party leader Marine Le Pen called on Thursday for creating a parliamentary commission in order to probe into clashes that occurred in Paris during the May Day demonstrations.

On Tuesday, over 30,000 people took part in the annual May Day demonstrations in Paris. The rallies turned violent after about 1,200 people dressed in black outfits and wearing masks, many of whom reportedly belonged to anarchist groups, began smashing windows of restaurants and cafes, attacked a McDonald's restaurant and set a construction vehicle on fire. The clashes left several people injured.

"Statements [of French Interior Minister] Gerard Collomb about Black Blocs [protesters trying to cover identity] are concerning: that is a strategy of capitulation to the groups that have been operating for several years and remained unpunished… It is necessary to establish a parliamentary commission to investigate what happened," Le Pen wrote on her Twitter page.

​The politician called for dispersing left-wing rallies by preventing their participants from coming to demonstrations and searching their bags for weapons.

Following the clashes, over 280 people were detained. Collomb told the France 2 TV channel that the organizers of the clashes would be searched and brought to justice. The minister also pledged to increase security measures during future rallies. 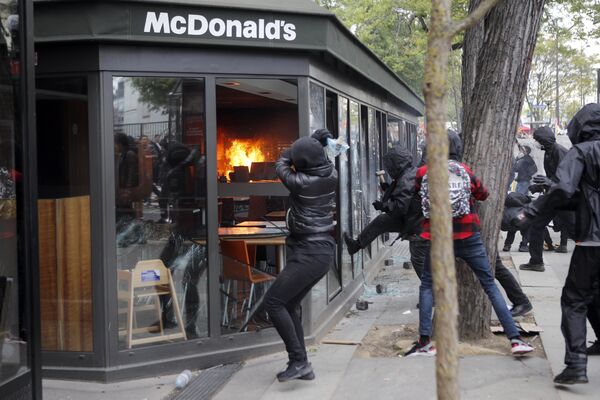 Activists smash windows of a McDonald's restaurant after it was hit with petrol bombs during the traditional May Day rally in the center of Paris, France, Tuesday, May 1, 2018
© AP Photo / Francois Mori