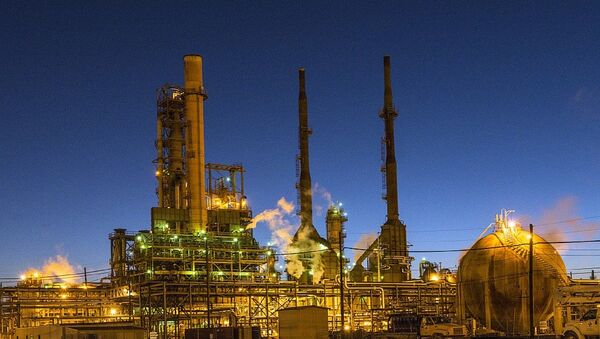 Walter Zimmerman: This information dates back prior to 2003 and we’ve seen a lot of pushback from Britain, France, Germany and even the IAEA. This is old news, everybody knows about it and there is nothing groundbreaking about it. Curiously enough, if you look at the actual price reaction, the day of Netanyahu’s presentation crude oil failed to make a new high. A few days prior, Brent had put in a high of $75.47. The day Netanyahu made his presentation the high was already $75.41 and the next day crude lost a dollar and a half and is in its lower rate now.

Sputnik: What do you think is the major driver of what we’re seeing on the market right now?

'Sanctions on Iran Had Big Impact on Price, Availability of Oil' – Expert
Walter Zimmerman: The Saudis want a big fat IPO for their Aramco offering, so they’ve been trying to work with Russia to back them up [with] a glut of crude oil. As global inventories have come back down to five-year averages, the market naturally becomes more sensitive to anything on the bullish side. So the big winner here if Trump goes ahead and messes with the Iranian deal, it’s probably going to be Saudi Arabia’s Aramco. That’s a one-off deal, so it’s not so much cyclical as I think it is a one-off hope that the Saudis will get a big price for Aramco because crude oil prices have gotten so high.

Sputnik: What effect could the anticipation of Iran sanctions have on the market?

Walter Zimmerman:  A big beneficiary of the alliance between Saudi Arabia and Russia has been US domestic crude oil production. They have these two countries to thank for the explosion in not only production, but also in what is called “drill but uncompleted wells.” There are 7,600 such crude and natural gas wells in North America just waiting for a high enough price to be unleashed on the market. So the risk is that the Saudis engineer too high a price rise and that unleashes a new tsunami of North American crude oil production. So they have to be careful that their greed doesn’t get the better of them and spoil their chances for a high IPO. It’s a fine line between tightening the market and unleashing a new tide of non-OPEC output. So the Saudis push prices up from here at their own risk.

Sputnik: What is the price when shale becomes interesting?

Walter Zimmerman: I think we are already there. I think that’s partly why crude markets, both WTI and Brent, were unable to make new highs on the Netanyahu news. I think that’s why when the dollar pushed above that long-awaited 92 resistance, Brent immediately lost a dollar and a half and has been unable to recover overnight. So I think that we are already at levels that make those 7,600 “drill but uncompleted wells” interesting at these price levels.

Sputnik: If the US introduces additional sanctions on Iran, what kind of impact would the loss of Iranian oil have on the global oil market?

Walter Zimmerman: It will probably have a temporary blip. In past cases like this there has always been a line of countries willing to fill the gap. It remains to be seen what Russia will do, although infrastructure in North America is kind of redlining right now and there is a limit to just how much new crude they can bring on the water. If the price gets high enough, the crude oil market will find a way.