'Chemical Attack' Provocation With US Participation Planned in Syria - Source 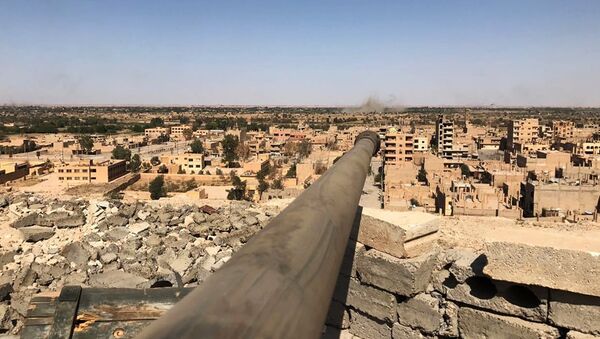 BEIRUT (Sputnik) - The tensions in the country have been running high since April, when media accused Damascus of carrying out a chemical attack in the city of Douma, with US launching missile strikes against Syria without waiting for the end of an investigation into the case.

"US security services are planning provocations with the use of prohibited substances in Syria. The operation is led by a former militant of the Islamic State *[Daesh], Mishan Idris Hamash. The aim is to stage a chemical attack against civilians to be further spread in the media," the source told Sputnik.

According to the source, the preparations began on April 23. The civilians are being shipped to a territory near Jafra oil field to participate in a staged filming of an attack scene.

UK Reporter: Douma Residents Laugh at Notion of ‘Chemical Attack’
The situation in Syria escalated last month, in the wake of an alledged chemical attack on the city of Douma on April 7. This incident  was used to justify airstrikes against Syria, performed by the US-led coalition, despite the fact, that Damascus strongly denied those allegations, adding that the use of chemical weapons in the capital's suburb could have been planned by terrorist groups. Moscow later found the "victims" of the claimed attack, who told reporters they were forced to participate in the filming.

The international community has voiced concerns about the use of chemical weapons inside of Syria since the alleged use of sarin gas in Damascus in 2013. After the incident Syria joined the OPCW and agreed to destroy its chemical weapons arsenal. On January 4, 2016, the OPCW confirmed in a statement, that Syrian chemical weapons are completely destroyed.

READ MORE: The Skripal and Douma Incidents Are Parts of Plan to Bring Russia Down — Chemist

*Daesh, also known as IS, ISIL, ISIS, is a terrorist group banned in Russia