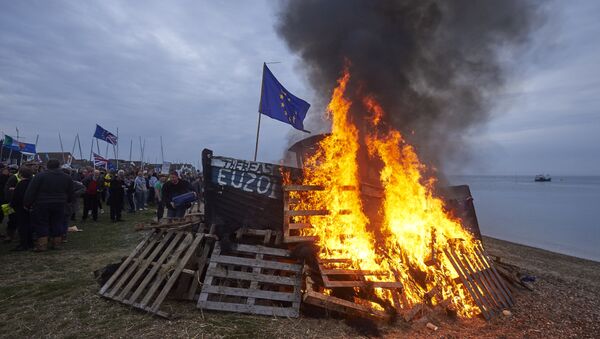 © AFP 2021 / Niklas HALLEN
Subscribe
British Prime Minister Theresa May’s Cabinet is negotiating a deal on whether the UK should leave the EU’s customs union or enter a ”customs partnership” with the bloc, but pro-Brexit MPs have delivered an ultimatum in May, threatening to vote against the EU deal she negotiated if she tries to push through a customs partnership proposal.

Sputnik discussed the disagreements between the Brexiteers and the Remainers in the UK with Iain Begg, professor at the European Institute of the London School of Economics and Political Science.

Sputnik: What is the latest in the sort of fight between the Brexiteers and Theresa May? Why are they so opposed of the customs partnership; and what do you think Theresa May will be able to suggest to counter this?

Iain Begg: The reason is that the promises around leaving the European Union are now having to be made specific, where they've been able to be obfuscated before now. Leaving the customs union and leaving the single European market were what Theresa May set out consistently in her various speeches at Lancaster House 18-15 months ago, in Florence last autumn, and again earlier this year.

But leaving the customs union is unpopular with business; business thinks we are strongly linked to the European Union, we don't want to put obstacles in our way, particularly, with supply chains, supply networks, and there's also the element of Northern Ireland, where in the absence of a customs union there would have to be some kind of border on Ireland, how hard it is, is a second order question, just having the border would be difficult for the Belfast Agreement which solved the problems of Ireland 20 years ago.

Hard Brexit Tory MPs Issue "Non-Threat" to PM as She Prepares Cabinet Showdown
Sputnik: But it is very interesting to know that the majority of Britons actually support remaining in the single market and custom union post Brexit, that's according to a BMG research poll. Some 60% of those surveyed said that they backed staying in the single market, 24% neither agreed or disagreed and only 16% opposed.

Another survey for the website Left Foot Forward found that 57% of Brits said that the UK should remain a member of the customs union, only 16% saying that they wanted to leave, and it's just very interesting to note that during the run-up to the Brexit vote, nobody really talked about the customs union or the single market, and staying in or out of that.

Iain Begg: At the risk of sounding patronizing towards my fellow citizens, I think the question that's not asked in these surveys is — what is the customs union and do you understand it — because a customs union is for economists a straightforward term, it means that you have no controls on exchanges of goods between your countries.

EU's Barnier Says Brexit is a Lose-Lose Situation
Sputnik: At the risk of sounding patronizing to your fellow citizens as well, I could say that it's the same people who might not understand what a customs union is that voted for Brexit, slightly over 2% voting in favor of leaving; so we could go back and forth about that, but what if factor are the options right now on the table?

Iain Begg: I think this is coming down to a real contest about the extent to which Britain wants to distance itself from the European Union. The pro-Brexiteers that you cited in your introduction clearly say "we want to make a clean break," and that remains the official government position, but there's been a huge pressure to soften it and to have something in between. In negotiations, it is very often the case that you say take the two extreme positions and split the difference, take the position in the middle.

I happen to think, although I would favor remaining in the European Union, that the in-between option will be very uncomfortable for everybody. It doesn't satisfy the Brexiteers, because they're not free to do trade deals with the rest of the world, nor will it really satisfy the pro-Remain people in the UK, because Britain would then become a rule taker rather than a rule maker, it's like Norway, although not part of the customs union, is in the single market and, broadly speaking, has to accept the rules of the European Union dictates to it, and that's not the position that Britons will feel themselves very comfortable with.

So I think we're reaching a crunch point in the whole Brexit debate about what form of Brexit we tolerate, and having to think through the ramifications of it not just for the immediate vote, but for significantly longer. Will we be comfortable with that outcome?