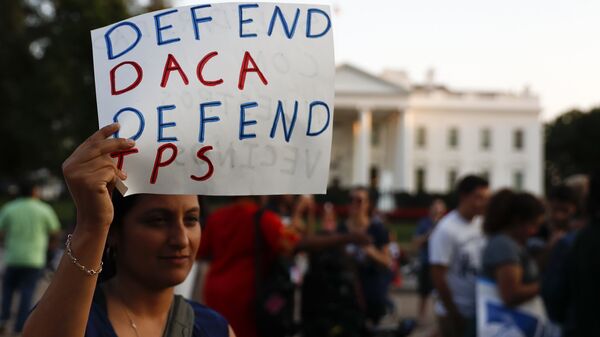 Trump, in fact, opposes DACA and his administration announced in September that it would end the program in spring. However, federal judge John Bates ordered the Trump administration to resume DACA program in 90 days unless it adequately explains the decision to end the immigration program.

Trump's Immigration Tweets Just an Attempt to ‘Further the Attack on California'
The DACA program was organized by former President Barack Obama by an executive order in 2012 and allowed temporary residency and work privileges to the undocumented immigrants who were brought to the United States illegally as children, known as "Dreamers."

On September 5, 2017, US Attorney General Jeff Sessions announced DACA's termination with a six-month delay to allow the authorities to close pending applications and renewals, and give the US Congress a chance to pass legislation to make DACA permanent.

Shortly after becoming a president in January of 2017, Trump signed an executive order to initiate the border wall project.