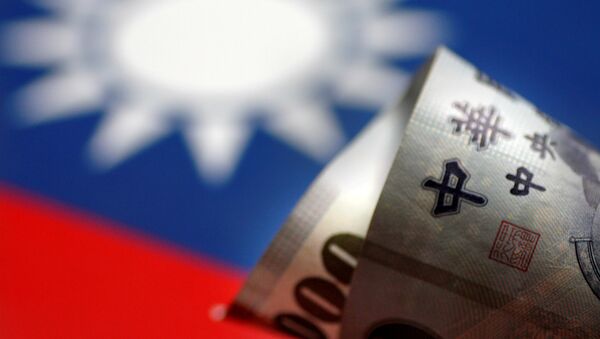 © REUTERS / Thomas White/Illustration
Subscribe
International
India
Africa
The Dominican Republic has severed diplomatic relations with Taiwan opting to establish ties with China instead. The Caribbean nation stated that forging ties with Beijing would be extraordinarily positive for the country’s economy.

Sputnik discussed how much of a blow this development is for Taiwan with Dr. Zhang Baohui, director of the Center for Asian Pacific Studies at Lingnan University in Hong Kong.

Sputnik: How much of a blow is this development for Taiwan?

Dr. Zhang Baohui: I think it’s even a bigger blow to the President of Taiwan, Madame Tsai Ing-wen, in fact Beijing has tailored this kind of tactic specifically against the DPP (Democratic Progressive Party) government because DPP government and Madame Tsai refused to accept the 'One China' principal and so Beijing's strategy is to undermine her domestic legitimacy and one way to undermine her legitimacy is to gradually take away the remaining diplomatic relations of Taipei and by doing that Beijing will make her look kind of incompetent, and so I think that’s really Beijing's agenda. This severance of diplomatic relations by the Dominican Republic will further undermine her legitimacy, her popularity rating now is quite low, around 30%, and this will add another blow to her.

Sputnik: Just explain to our international listeners what prompted the Dominican Republic to take this step now? What opportunities does the establishment of diplomatic ties with China presenting for the nation now?

Asia
China Puts 'Guam Killer' Missile Into Service Amid Ongoing Drills Near Taiwan
Dr. Zhang Baohui: I think the overall incentive for the Dominican Republic, and as well as other countries such as Panama which also severed relationship with Taiwan, is really the rise of China. China is now an economic superpower and so there’s a lopsided imbalance between China and Taiwan, and so other countries can reasonably predict that if they switch sides then they can get more from China economically speaking, financial aid and things like that. So it’s not a surprise that more and more countries are trying to switch sides.

Sputnik: Taiwanese Foreign Ministry blamed the Caribbean nation's decision on dollar diplomacy, what’s your take on this dollar diplomacy? Is that an accurate way of describing it?

Dr. Zhang Baohui: I think so, I think Beijing, obviously, has the bigger wallet and that’s its advantage over Taipei, but Taipei's criticism is illegitimate because Taiwan itself uses dollar diplomacy to try to keep its allies, it’s diplomatic ties, and, in fact, according to media, just last year Taipei donated one hundred military vehicles to the Dominican Republic. So they’re also using dollar diplomacy, but the problem for Taipei is they just can’t compete with Beijing. Beijing has a  much bigger wallet, that is the problem.

Sputnik: I don't think we can argue too much with the size and the overall wealth of China, it’s very difficult fight to take really. Last year Panama switched its position on Taiwan as well, whereas the Vatican is rumored to be considering this option at some point in the future too, what’s making the nations that recognize Taiwan to turn their back on the country now?

Dr. Zhang Baohui: I think the fundamental reason and I already mentioned that is really the power shift. China is emerging as a superpower and other countries they’re not foolish, they can assess their national interest in that context. So maintaining ties with Taipei would deny them access to economic aid, financial aid from Beijing, and obviously Beijing can offer them much more than Taipei, and so in the context of China’s rise, it’s like a snowballing effect, more and more countries will decide to abandon Taipei and switch sides.

Sputnik: Are you saying basically that this is the beginning of the end for Taiwan then?

Dr. Zhang Baohui: If Beijing wanted yes, if Beijing wanted they can outcompete Taipei almost everywhere, because the size of their power is so lopsided against Taiwan that other countries, obviously, they can see it, when one side is the emerging superpower and the other side is at best a middle power, and so I don't think it’s a fair fight for Taiwan, so if Beijing wanted it can take away most of the existing ties of Taiwan.

Sputnik: It certainly looks like the beginning of the end, now with the recent developments driving a wedge between the long-standing rivals, what further consequences could it take? How do you see the future panning out now between these two nations, albeit Taiwan is a part of China and Taiwan's just going to have to beg to China‘s greater superiority then by the looks of things? Is that the case and is that how you see it?

Asia
'Direct Interference': China's MoD Slams US-Taiwan Travel Act
Dr. Zhang Baohui: Beijing’s aim I don’t think is necessarily to force Taiwan by chipping away Taiwan's diplomatic relations to force Taiwan to recognize, not Taiwan in general but the DPP government, the Democratic Progressive Party which is right now run by President Tsai, it’s not to force them to accept the 'One China' principal, Beijing is very realistic that the DPP is a bunch of ideologues so they’re not going to do that anyway, but Beijing wants to undermine Tsai’s domestic legitimacy, because Beijing can prove to the Taiwanese people that Tsai has destroyed the bilateral relationship between Taipei and Beijing as a result of that Taiwan is being punished, and that Tsai couldn't do anything to reverse this momentum, so that will weaken Tsai’s domestic legitimacy. Beijing hopes that this will allow the Kuomintang (or Guomindang — Nationalist Kuomintang Party) which tends to have a much better relationship with Beijing to return to power in the next election, and I think that's Beijing’s agenda.