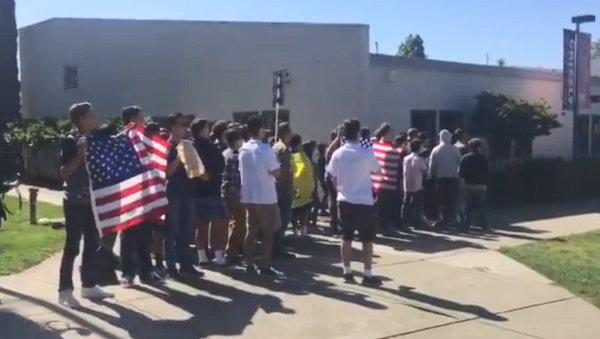 © Twitter/PeteSuratos
Subscribe
Students across the US walked out of their classrooms Wednesday in support of the Second Amendment to the country’s Constitution, which enshrines the right of US citizens to keep and bear arms.

The rallies, called "Stand for the Second," were spearheaded by 18-year-old Will Riley, a senior at Carlsbad High School in New Mexico, to demonstrate that not all young people support the previous gun protests that swept the nation after the Marjory Stoneman Douglas High School shooting in Parkland, Florida, on February 14 that killed 17 students.

​Students across the US walked out of class for 16 minutes Wednesday at the suggested 10 a.m. local time. According to the Stand for the Second website created for the event, the walkout was purposefully planned to be one minute less than the 17-minute-long walkout that occured after the Parkland massacre to honor the 17 slain in the shooting.

"In the spirit of civility with school districts around the country, we are asking for one minute less than the other side received. Additionally, it is estimated that in the US each year 1.5 million people use a firearm to defend themselves. Break that down to 16 minutes and you have 91 people using a gun responsibly and correctly. We want to draw attention to the people who are legally and effectively exercising their rights," the website states.

"I'm watching the news and I see they're saying: ‘We have to do something about this. We have to enact some sort of gun control legislation because this is what the kids are asking for.' And I'm thinking, ‘I'm not asking for that.' I look at my friends and think, ‘They're not asking for that,'" Riley told CBS19.

Riley told CBS19 that he organized the protests to give a voice to people "who feel that they're being misrepresented by the media."

"These Parkland high school students do not speak for my generation," Riley also wrote in a column published recently in the Carlsbad Current Argus.

"I am not a hunter. I am not a shooter. But this issue is not only about guns. This is a battle for the very heart and soul of our country. My goal is simple. I want to spread awareness that not all of my generation shares in this short-sighted crusade to strike a grievous blow for our nation," Riley told the outlet.

Around 100 students walked out of Grand Ledge High School in Michigan, where they gathered around a flagpole in front of the school. The students, who were joined by American Legion-VFW Post 3293 Honor Guard members led by veteran Dale Walters, had a moment of silence for the police and members of the armed forces.

"We are for your rights," Walters told students. "You guys are the next line of defense, think about what rights we have and how you can defend them," he added, CBS19 reported.

Sixteen-year-old Hunter Barnes, a sophomore at Grand Ledge, told CBS19 that the right to bear arms is important for self-protection from harm inflicted by weapons.

"I believe we need weapons to protect from other weapons," Barnes said.

Zach Bell, a senior at Grand Ledge, also told USA Today that the Second Amendment "is a vital part of our Bill of Rights."

"I believe it's important. Without it we wouldn't be the country that we are today," Bell added.

Students in Montana, North Carolina and New York wore t-shirts or held signs that said "Stand for the 2nd Walkout." In addition, many students held up the US flag as well as signs and banners supporting US President Donald Trump.

Grand Ledge Public Schools Superintendent Brian Metcalf told USA Today on Tuesday that "Students have a First Amendment right to express their views. We want them to develop their own voice. I think you've got to give them some leeway for expressing those thoughts."

Sophomore Mario Giordano, who walked out of Ridgefield High School in New Jersey, said that even though neither he nor any of his family members own guns, he still believes the Second Amendment is one of the most important amendments to the US Constitution.

"It protects all other amendments," Giordano said, CBS19 reported.

On Tuesday, Ryan Deitsch, one of the survivors of the Parkland mass shooting, tweeted, "Today's 10:00AM walkouts asked for 16 minutes in an attempt to ask for less than the ‘anti-gun' student groups from previous walkouts. This forgets to mention the 17 minutes were for each fallen Eagle at Stoneman Douglas. They may have forgotten, but America will not. #NeverAgain."