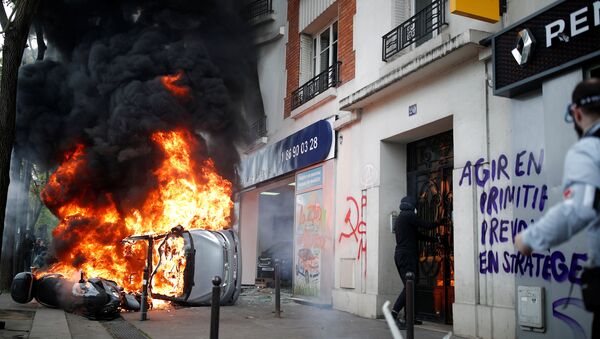 PARIS (Sputnik) - French Interior Minister Gerard Collomb on Wednesday pledged to increase security measures for upcoming rallies in the country in light of violent clashes during traditional May Day demonstrations in Paris.

On Tuesday, over 30,000 people took part in the annual May Day demonstrations in Paris. The rallies turned violent due to the participation in the mass actions of about 1,200 people, many of whom belonged to anarchist groups. Anarchists, dressed in black outfits and wearing masks, began smashing windows of restaurants and cafes, attacked a McDonald's restaurant and set a construction vehicle on fire. According to police, as many as 109 individuals were detained following Tuesday's clashes.

"For the future manifestations there would be even more police forces in order to completely separate protesters and those, who seek vandalism," Collomb told France 2 broadcaster.

French Gov't Spokesman Calls Washington 'Historical Partner' of Paris
Collomb warned against certain groups spreading extremism on social networks as prior to Tuesday's manifestations some people called for a rally titled "a day in hell."

On Tuesday, the police, which initially did not react to riots, eventually did intervene, using tear gas and water cannons against the protesters. Following the demonstrations, the police and authorities were subject to harsh criticism over inability to avert violence. French President Emmanuel Macron strongly condemned the riots and stressed that those responsible for the violence would be held accountable for their actions.