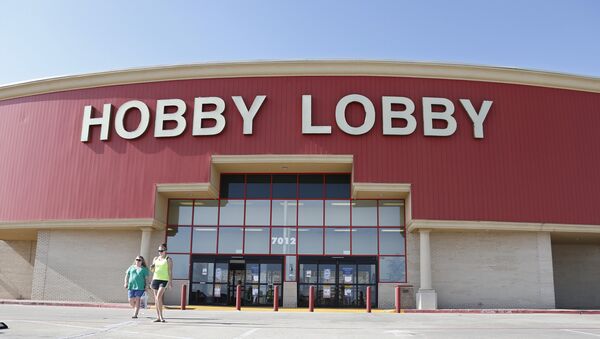 © AP Photo / Sue Ogrocki
Subscribe
Hobby Lobby, an Oklahoma-based national arts and crafts chain, will have to return to Iraq the 5,500 ancient Iraqi artifacts it bought in 2010 from dealers from Israel and the United Arab Emirates (UAE) and Israeli dealers as a result of a lawsuit filed by the US Justice Department that found the items had been improperly imported.

According to Fortune, the retailer bought the objects, which cost around $1.6 million and include cuneiform tablets, clay bullae and cylinder seals, even after being warned that the artifacts could have been stolen from Iraqi archaeological sites.

"In October 2010, an expert on cultural property law retained by Hobby Lobby warned the company that the acquisition of cultural properly like from Iraq, including cuneiform tablets and cylinder seals, carries a risk that such objects may have been looted from archaeological sites in Iraq," a Department of Justice document released by the US Attorney's Office on July 5, 2017, reads. The DoJ sued Hobby Lobby for improperly declaring the objects to US Customs and Border Protection (CBD).

"[A] expert warned Hobby Lobby that an improper declaration of country of origin for cultural property could lead to seizure and forfeiture of the artifacts by CBD," the statement notes.

"The acquisition of the artifacts was fraught with red flags. For example, Hobby Lobby received conflicting information where the Artifacts had been stored prior to the inspection in the UAE. Further, when the Artifacts were presented for inspection to Hobby Lobby's president and consultant in July 2010, they were displayed informally. In addition, Hobby Lobby representatives had not met or communicated with the dealer who purportedly owned the artifacts, nor did they pay him for the artifacts. Rather, following instructions from another dealer, Hobby Lobby wired payment for the artifacts to seven personal bank accounts held in the names of other individuals," the statement explains.

"American collectors and importers must ensure compliance with laws and regulations that require truthful declarations to CBD, so that Customs officers are able to scrutinize cultural property crossing our borders and prevent the inappropriate entry of such property," Acting United States Attorney Bridget M. Rohde stated in the document. In addition, the shipping labels on the objects incorrectly described them as "ceramic tiles" or "clay tiles" from Turkey or Israel.

On Wednesday, Hobby Lobby will return 3,800 of the artifacts to Iraq. It also agreed to pay a $3 million fine to the Department of Justice last July, NPR reported Tuesday.

Hobby Lobby has made huge donations of artifacts to the new Museum of the Bible, of which Hobby Lobby President Steve Green is a founder and chair. The museum, which opened in Washington, DC, in November, was given $201 million worth of artifacts from Hobby Lobby for its collection, NPR reported.

In a July 5, 2017 statement by Hobby Lobby, Green, said, "We should have exercised more oversight and carefully questioned how the acquisitions were handled. Hobby Lobby has cooperated with the government throughout its investigation, and with the announcement of today's settlement agreement, is pleased the matter has been resolved."

"The Company was new to the world of acquiring these items, and did not fully appreciate the complexities of the acquisitions process. This resulted in some regrettable mistakes… We have accepted responsibility and learned a great deal," the statement adds.

An official from the Iraq Embassy in Washington, DC, told NPR that the returned objects would most likely be exhibited at Iraq's National Museum.