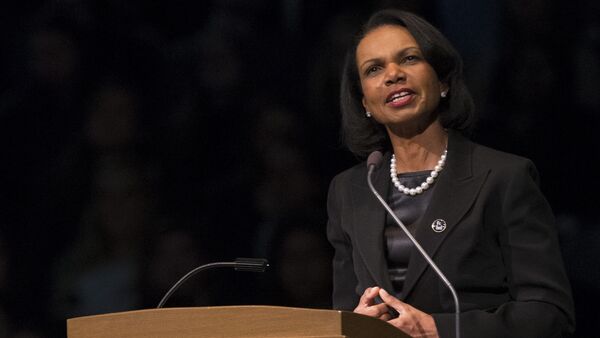 The US ex-secretary of state said that she wouldn't have signed the agreement at all, adding that if Washington pulls out of the deal, it "would be just fine."

Washington's possible withdrawal from the nuclear deal with Iran won't be "the end of the world," former US Secretary of State Condoleezza Rice told Fox News.

"I would not have signed this deal. I don't think it was a very good deal. I think we were in a hurry to get a deal and we left a lot on the table," Rice argued.

The politician acknowledged that Washington's allies in Europe — mainly Germany and France — support the deal and call for it to stay in place. She also stated that the US might stay if the agreement is "improved."

However, Rice noted that the US pulling out of the deal wouldn't be a bad decision either.

"But if we get out of this deal, it's going to be just fine," she said. "But I don't think it's the end of the world if the administration leaves the agreement."

On Monday, Israeli Prime Minister Benjamin Netanyahu announced that Tel Aviv has 100,000 files proving that Iran has continued to maintain a secret nuclear program despite signing the Joint Comprehensive Plan of Action (JCPOA).

Iran Deal: 'US Has Been Violating Agreement Ever Since it Was Signed' - Prof.
The White House on Tuesday said it backed Netanyahu's assertions, while US President Donald Trump stated that in the coming weeks he would make a decision on whether to withdraw from the Iran deal.

Trump has repeatedly expressed his dissatisfaction with the JCPOA and in late January, 2018, he intensified his rhetoric, asking Congress to address the flaws in the "terrible Iran nuclear deal" and threatened to pull out of it otherwise. Trump is expected to announce his decision on the JCPOA by the May 12 deadline.

The JCPOA was inked by the EU, Iran and the P5+1 group, which includes Russia, China, France, Britain, the US plus Germany, on July 14, 2015. Under the deal, Tehran pledges to not seek to develop or acquire nuclear weapons in exchange for the lifting of sanctions imposed against it.