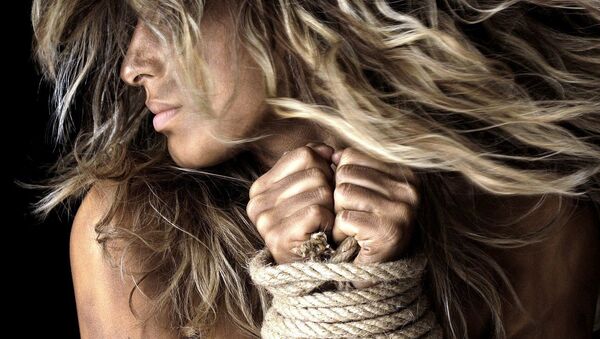 Britain is failing to fight the scourge of modern slavery because the Home Office does not understand the crime, the perpetrators, or victims, a parliamentary committee said.

The government in the UK does not know how much public money is being spent on tackling modern slavery and wouldn't even know if it was doing a good job because there is no data or strategy behind the Modern Slavery Act, according to a damning report published by the Public Accounts Committee.

"This crime is complex and a piecemeal approach will not cut it," MP Meg Hilliar, chair of the committee said, calling for British government to "get a grip on what works and what doesn't."

"Government cannot hope to target resources in an effective manner until it properly understands the scale and nature of the challenge," Meg Hilliar said.

Victims caught up in human trafficking and modern slavery are left waiting for too long to find out whether they will be indeed treated as a victim of modern slavery. The Home Office does not know what happens to victims once they have gone through the system, or indeed if they have been trafficked again.

Our new short film, Behind the Behaviour, aims to raise awareness about the exploitation of child migrants for forced criminality, children's rights & the support available to themhttps://t.co/re7ksH3czK#ChildTrafficking #UASC #ModernSlavery

"Victims of modern slavery can face unimaginable horrors but the government's good intentions have yet to result in coherent action to help them," Meg Hilliar said.

Modern slavery is a complex crime. Government must get a grip on what action works and what doesn't. Read our new recommendations https://t.co/JDOfJL4bL1 pic.twitter.com/6XmCGl927f

Written evidence submitted to the committee included a letter from the Petrol Retailers Association (PRA) expressing concerns about the increase in unregistered hand car washes [HCWs] operating on garage forecourts.

"There are estimated to be more than 20,000 unregistered HCWs in the UK accounting for over 80 percent of the UK car wash industry by volume, and these car washes are often controlled by gangmasters, in many cases employing modern slaves." The letter says, adding "recent evidence now firmly pointing to HCWs as being rife with criminal gangs which thrive on these very activities."

The government estimates at least 13,000 people are enslaved in the UK, however its feared that number could be the tip of the iceberg.

Pregnant Victims of Modern Slavery left 'Isolated' in London - Charity
"The Home Office has no means of monitoring progress or knowing if its Modern Slavery Strategy is working and achieving value for money." The report concludes.

Britain passed the Modern Slavery Act in 2015, the first of its kind in Europe to tackle human trafficking and modern slavery. The Act included a clause compelling businesses to publish what they are doing to eradicate slavery from their supply chains. However, the report by the parliamentary accounts committee suggests business "compliance with supply chains legislation is dismal."

Today's parliamentary report on Gvt #modernslavery strategy says Home Office "hands-off approach to businesses’ compliance with its transparency in supply chains legislation is not working" in light of only 30% take up by companies. https://t.co/dL3xnO0wsV

READ MORE: British Businesses Must Do More to Stamp Out Slavery from Supply Chains

However this report suggests the Modern Slavery Act may be enshrined into British law, but the law in Britain falls short in helping victims rebuild their lives, or worse, prevent them from be trafficked and exploited again.

In short: the Committee confirms what @Anti_Slavery has been saying for years: the Modern Slavery Act means nothing if no real strategy & resources is put behind it. It’s time to take the anti-slavery fight to the next level.