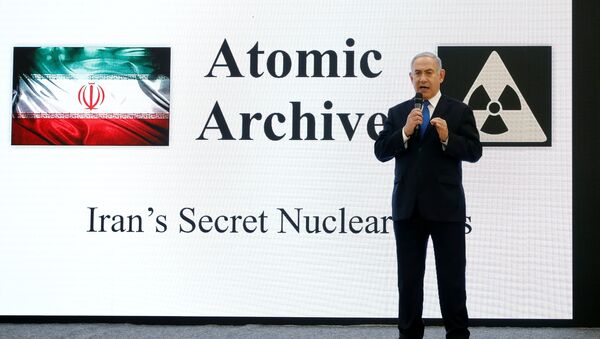 Israeli Prime Minister Benjamin Netanyahu on Tuesday defended his dramatic “revelation” regarding Iran’s “lies,” dubbed “old news” by former CIA Director Michael Hayden, while asserting that he does not seek a military confrontation with the Islamic Republic.

In an interview with CNN on Tuesday, Netanyahu reiterated his claim that Iran was "brazenly lying" about its nuclear ambitions prior to the 2015 Iran nuclear agreement.

But when pressed on Israel's own nuclear capability, the prime minister repeatedly refused to directly answer the question and only said that he did not seek war with Iran.

"I'll tell you one thing, we've never called for the annihilation of any country," Netanyahu told CNN's "New Day" host Chris Cuomo. "Nobody is seeking that kind of development."

Netanyahu accused Iran of being "the one that's changing the rules in the region" and indirectly prompting other countries to seek nuclear weapons.

"It's interesting that the nuclear arms race that I predicted would unfold once this deal was signed because everybody knew that they were just kicking the can forward for a few years and as time passes Iran will get a nuclear arsenal," he said.

"Now you hear other countries in the region saying ‘We want nuclear weapons, too.'"

Moscow Stresses Need to Authenticate Israel's Iran Nuclear Deal Docs - Envoy
Netanyahu has faced accusations that it revealed little that was not already known by the international community.

The International Atomic Energy Agency (IAEA), the United Nations' watchdog monitoring Iranian nuclear activity, announced in 2015 that there was no evidence indicating that Iran carried out any activity related to the development of nuclear weapons after 2009.

The IAEA reiterated its position on Iran's nuclear program on Tuesday.

The deal stipulates that Tehran pledge not to develop or acquire nuclear weapons in exchange for the lifting of sanctions imposed against the country.