Over 10,000 People Hit by Floods Evacuated in Somalia (PHOTOS) 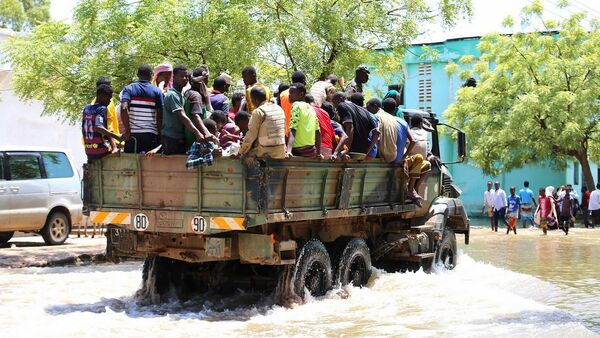 MOSCOW (Sputnik) - The forces of the African Union Mission in Somalia (AMISOM) and the Somali National Security Service have evacuated over 10,000 people stranded in the south-central city of Beledweyne as a result of the severe floods in the country, the AMISOM said in a statement.

According to Col. Abdourahman Rayale Hareed, who heads the rescue mission, those evacuated have been taken to the village of Eel Jaalle, which is geographically remote from floods.

"As you can see there is a need for transport, we have used vehicles that we could get to evacuate these people. They need urgent assistance with items such as food and water," Col. Hareed, who was accompanied by Somali national security forces, stated.

#AMISOM & #Somali national security forces evacuate flood victims in #BeletWeyne. They evacuated more than 10,000 marooned by the raging floods. Residents of Belet Weyne are among the worst hit, leaving many homeless and others moving to higher ground. https://t.co/pSb9MMXtQf pic.twitter.com/xEWHKhXIFK

On Sunday, Somalia's Prime Minister Hassan Ali Khayre appealed to the international community to address the consequences of flooding of the Shabelle and the Jubba rivers, which, according to the official figures, has already affected over 420,000 people in the country, including 175,000 Somalis, who have been displaced.