Secret Revealed: Oak Planted by Macron, Trump Removed, But for Good Cause 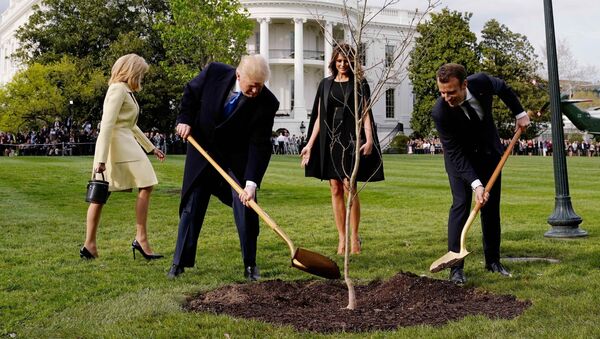 While covering German Chancellor Angela Merkel's visit to Washington, several media outlets noticed that the tree planted by French president Emmanuel Macron and his American counterpart Donald Trump on the White House lawn some days earlier, as a symbol of the countries' friendship, was missing.

There were a lot of speculations over the oak's mysterious disappearance on social media: some said that the oak was dug out to be planted again in the fall — a better season for planting such trees compared to spring, whereas others were prepared for the worst, saying that the tree may have just failed to take root. However, the French version of the Huffington Post reported that the reason behind the absence of the oak was that it was quarantined.

The media explained that there are strict sanitary rules for any imported seeds, plants and even soil in the US. The presidential gift was no exception. However, a source at the Elysee Palace confirmed to the Huffington Post that the oak was doing well and the quarantine period would end soon.

100 years ago, American soldiers fought in France, in Belleau to defend our freedom. This oak tree (my gift to @realDonaldTrump) will be a reminder at the White House of these ties that bind us. pic.twitter.com/AUdVncaKRN

Earlier, media drew attention to the fact that the place on the White House South Lawn where the tree had been planted was empty. A photo taken by a Reuters photographer shows a yellow spot and no traces of the oak on the tree sapling's place. 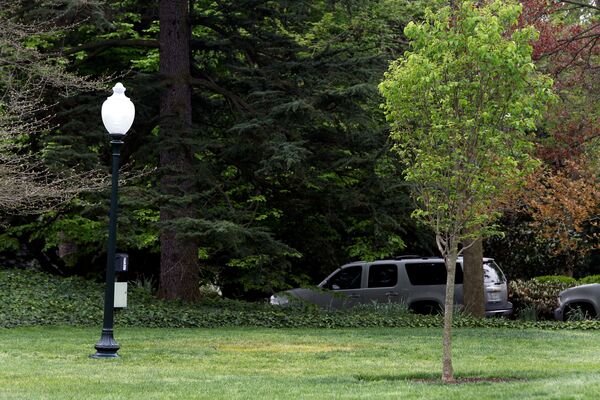 A yellow spot is seen where the tree planted by French President Emmanuel Macron and U.S. President Donald Trump on April 23 stood on the South Lawn of the White House in Washington, U.S., April 28, 2018
© REUTERS / Yuri Gripas

Macron's Remark on France's, US' "Particular Responsibility" Roasted on Twitter
French President Emmanuel Macron and his wife visited Washington to honor the 250th anniversary of relations between Paris and Washington. The oak plant, which they brought as a gift, was taken from a northern French forest, where in 1918 the first major battle of the First World War with the participation of American soldiers took place. Together with the American president and the first lady of the US, they planted the tree on the lawn in front of the White House.
Newsfeed
0
Access to the chat has been blocked for violating the rules . You will be able to participate again through:∞. If you do not agree with the blocking, please use the feedback form
The discussion is closed. You can participate in the discussion within 24 hours after the publication of the article.
To participate in the discussion
log in or register
loader
Chats
Заголовок открываемого материала