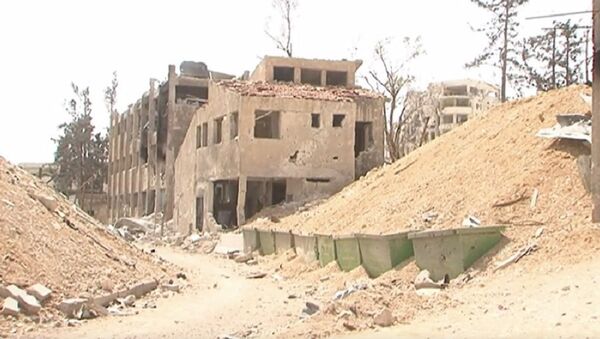 © Photo : YouTube/Ruptly
Subscribe
International
India
Africa
A British reporter returning from five weeks in Syria told Radio Sputnik on Monday that civilians strolling the streets and people in around Douma literally laughed at her when she asked if there had been chemical attack there just weeks ago.

The alleged attack provided a pretext for the United States, British and French armed forces to fire more than 100 missiles at targets in Syria on April 13.

​"I spoke to medical staff and doctors at the medical point that took in victims the night of the alleged chemical attack and all told me they were suffering from dust and smoke inhalation, that there was no chemical attack," journalist Vanessa Beeley told Fault Lines on Radio Sputnik Monday.

"They were being treated for dust and smoke inhalation before the treatment was broken up by the White Helmets and a number of other actors who basically converted it into a chemical weapon attack," Beeley, an editor at 21st Century Wire, continued.

The White Helmets, also known as Syrian Civil Defense, has received millions in financing from Washington, London, Doha and many EU member states. While the Syrian Arab Army drove out the armed militants from Eastern Ghouta earlier this month, militants from Jaysh al-Islam, a jihadist group financed by Riyadh, rode on the same buses as White Helmet operatives on the route from Douma to Idlib, the journalist explained.

"Even outside the medical point when I spoke to civilians on the ground — people just walking past, people in the shops, in the market area — actually started laughing when I asked ‘Was there a chemical attack?'" Beeley told Sputnik.