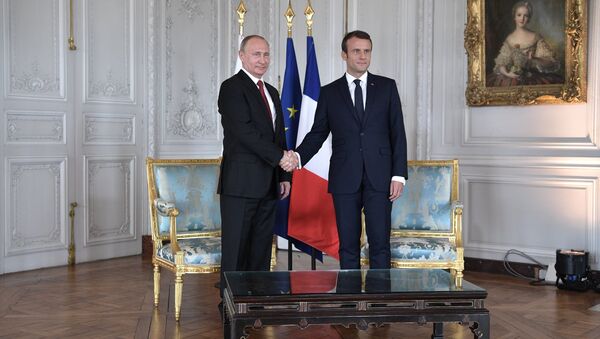 In a telephone conversation, which took place at the initiative of the French side, Russian President Vladimir Putin and French President Emmanuel Macron called for the preservation of the nuclear agreement with Iran, as well as stressed the necessity of its strict implementation, the Kremlin said in a statement.

According to the Kremlin, Macron informed Putin about the results of his visit to the United States with an emphasis on his talks regarding the Joint Comprehensive Plan of Action (JCPOA), dubbed the Iran nuclear deal, with US President Donald Trump.

The Elysee Palace said in a separate statement that president Macron expressed hope during phone talks with Russian President Vladimir Putin on Monday that Moscow would play a significant role in the settlement of a number of challenging issues in the Middle East.

"The president of the republic expressed a wish to launch negotiations in close cooperation with Russia, other members of the UN Security Council, regional and European states, on the issues of control of Iran's nuclear activity beyond 2025, Iran's missile program, as well as the situation in Syria and Yemen," the presidential office said, adding that Macron hoped for Russia's "constructive role" on all these issues.

Following the phone call, Macron reiterated on his Twitter page that the two leaders should keep working on the problematic issues in the Middle East.

I have been speaking to Vladimir Putin to once again assess the situation. Iran must never obtain a nuclear weapon. The stability of the region and international security depend on this. We are working on it, as we must also work on building a just peace in Syria. https://t.co/eqHTq39x2F

Other topical issues of the international and bilateral agenda were also discussed during the phone conversation.

Fierce controversy over the nuclear deal with Iran broke out after Donald Trump refused to re-certify Iran's compliance with the agreement in October 2017.

World
US to Be 'Startled' With Iran Response Readiness if It Withdraws From JCPOA
Even during his election campaign, Trump branded the JCPOA as "the worst deal ever" and since assuming the office has continuously slammed Iran for alleged non-compliance with the deal and has threatened to pull out from the agreement. However, the International Atomic Energy Agency (IAEA) has repeatedly certified that Tehran has been fulfilling its nuclear-related commitments. On April 23, the nuclear watchdog's chief coordinator Cornel Seruta once again reiterated that "Iran was subject to the world’s most robust nuclear verification regime."

In January 2018, Trump asked the US Congress and European Union allies to address "flaws" in the agreement. The United States is expected to announce whether it will extend US sanction waivers for Iran on May 12.

The JCPOA with Iran was signed on July 14, 2015, by the European Union and the P5+1 group of countries — the United States, Russia, China, France and the United Kingdom plus Germany. The accord stipulated a gradual lifting of anti-Iran sanctions in exchange for Tehran curbing its nuclear program and allowing inspections to ensure that the nature of the program is peaceful.