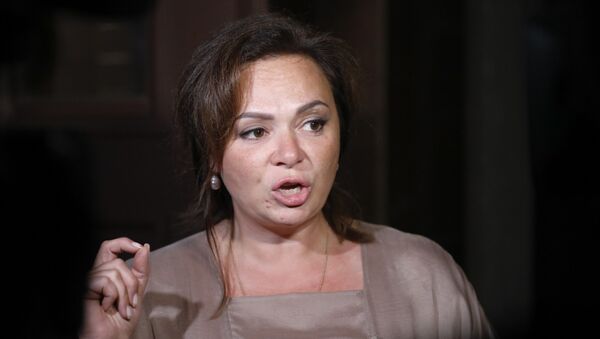 If Natalia Veselnitskaya is working for a government, she is working for the US Congress just as much as she supposedly is the Kremlin, the attorney told Lee Stranahan and Garland Nixon of Radio Sputnik’s Fault Lines.

Last week, NBC News reported that it had exclusive information that Veselnitskaya, the Russian attorney who met officials connected with Donald Trump's presidential campaign at Trump Tower in 2016, "was more deeply connected to the Kremlin than previously known."

"I am a lawyer, I am an informant," NBC quoted Veselnitskaya as saying. But she's not an "informant" working for the Kremlin, she told Fault Lines in newly revealed audio. That is a disingenuous mischaracterization, she said.

​"The fact alone, that I was communicating information to the General Prosecutor's Office of the Russian Federation, does not make me the Kremlin's lawyer or a government lawyer, not in the least," she said in audio that aired Monday on Fault Lines.

Specifically, she has been investigating investment fund manager at Hermitage Capital Management Bill Browder and the Magnitsky Act, and it has been reported for months that her meeting with Trump campaign officials was about this specific US law, which imposes travel bans and financial sanctions on individuals alleged to have been involved in the death of Russian lawyer Sergei Magnitsky.