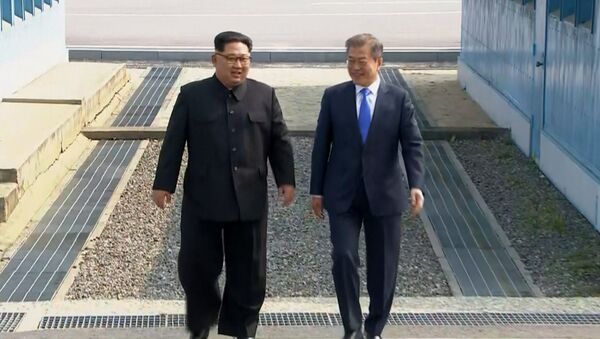 WASHINGTON (Sputnik) - North Korea’s leaders are concerned that the genuine progress they have made in negotiations with South Korea can still be blocked or overturned by the United States, retired Canadian diplomat Patrick Armstrong told Sputnik.

"The last agreement in 1994 — a type of ‘dual suspension’ — was broken by Washington; Washington is what Pyongyang really fears," Armstrong said.

On Friday, North Korean leader Kim Jong-un and South Korean President Moon Jae-in signed a joint declaration at their summit meeting at Panmunjom agreeing to take measures to support international efforts aimed at denuclearization of the Korean peninsula and end the state of war between the two countries.

Armstrong said the joint declaration opened the way to revive the "dual suspension" track for Pyongyang and Seoul to achieve a successful denuclearization agreement.

"The announcement suggests a step toward ‘dual suspension’ in this sentence: ‘South and North Korea agreed to carry out disarmament in a phased manner, as military tension is alleviated and substantial progress is made in military confidence-building,’" the veteran Canadian diplomat said.

Armstrong said Kim and Moon’s agreement in returning to the "dual suspension" track augured positively for their shared commitment to achieve denuclearization in the Korean peninsula.

"I have long thought that the solution in Korea is what the Chinese call the ‘dual suspension’: The North gives up its nuclear weapons and the South agrees to stop the annual threatening exercises with the United States," he said.

However, the negotiating path to achieve such an agreement could still be long and uncertain, Armstrong cautioned.

"Getting from here to there will take a lot of careful testing of intentions and actions… But a seven-decade situation will take a long time to end," Armstrong said.

Japan, US See Inter-Korean Summit as Step Toward Peace in North-East Asia - Abe
North Korea’s leaders were still haunted by memories of the destruction they had suffered in the 1950-53 Korean War and recent military interventions by the United States and its allies, especially by the United Kingdom and France in Libya since 2011, had fanned those fears, Armstrong explained.

"Kim remembers the horrors visited on North Korea by the United States in his grandfather's time and has little trust in Washington, especially after the destruction of Libya," he said.

However, the biggest problem with achieving denuclearization in Korea was not Pyongyang’s fears, but what US policymakers would decide to do, Armstrong warned.

US Intel Requests Firms' Help in Tracking Military Objects in N Korea - Reports
The fate of denuclearization was still clouded with uncertainty about what Trump would do, and whether he could successfully impose an agreement even if he wanted to, Armstrong noted.

"Reading his inaugural speech, one would expect Trump to want to get out. But who can say? Washington is, as the Russians say, ‘not-capable-of-agreement-with.’ The president says ‘No’ to NATO expansion [one minute]; the next [he] says, ‘Expand,’" Armstrong said.

Trump’s willingness to scrap existing agreements and to permit contradictory messages to be sent through enormous doubt over even agreements on Korea, Syria and Iran that he supported, Armstrong commented.

"Korean agreements are passed by presidents, blocked by Congress. UN resolutions are used as licenses to kill. One [US government] says deal with Iran, the next says no deal. Syrian ceasefires are negotiated by State and canceled by the Pentagon," he said.

This confused state of affairs among US policymakers looked likely to continue, Armstrong remarked.

'I Hope He Considers Me Friend': Philippines' Duterte Calls Kim Jong-un His Idol
North Korea and South Korea had successfully launched their new denuclearization talks, but the shadow of uncertainty from Washington still threatened their efforts, Armstrong concluded.

"I believe that the two principals and their immediate neighbors could work their way to a solution over time; Washington is the unpredictable part," he said.

President Trump so far has supported the North-South talks and President Moon of South Korea has suggested the US president should be nominated for the Nobel Peace Prize for his efforts.