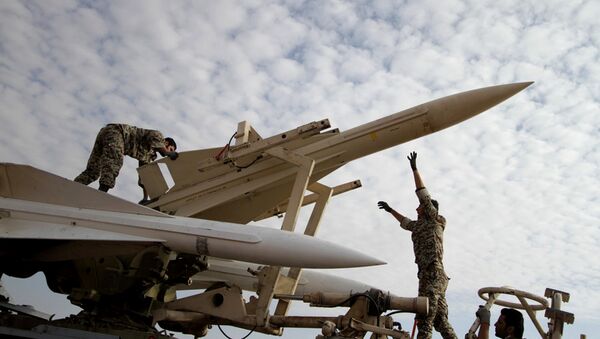 © AFP 2021 / ISNA/AMIN KHOROSHAHI
Subscribe
Officials in Tel Aviv issued the warning to Tehran less than a day after a reported Israeli missile strike on military bases in Syria, one of which reportedly resulted in Iranian military casualties.

Military and political sources have told Russia and the United States that Tel Aviv will target Iran directly if Tehran acts on its threat to respond to Israel's alleged Sunday night attack on military bases in Syria, Haaretz reports.

The alleged Israeli attack on Hama and Aleppo on Sunday night is reported to have killed up to two dozen servicemen, most of them Iranians. An Iranian state news agency has denied that the strikes hit an Iranian base, but did vow to respond to an Israeli attack on the T-4 airport in Homs, also believed to have been targeting Iranian forces, earlier this month.

According to Haaretz, Israeli officials have said that if Iran attacks Israel from inside Syria, or does so using its Hezbollah "proxy," Israel will strike back.

Mike Pompeo, Jordan's King Agree on 'Urgent Need' to Confront Iran in Syria
Amid a debate inside Tel Aviv on how to react if Iran were to directly or indirectly hit a population center inside Israel, Israeli military sources said that the reaction should be limited to Iranian interests in Syria. Meanwhile, the Israeli military has promised to continue to target Hezbollah weapons convoys in Syria.

Syria has been engaged in a foreign-backed civil conflict since 2011. Iranian forces began assisting the country in 2013, providing logistical and technical support, troop training and some combat troops to fight a ragtag collection of rebel militias which include Daesh* and al-Nusra Front*.

000000
Popular comments
Israelis God's chosen people ? more likely Satan's chosen people !
Jazzie
30 April 2018, 22:26 GMT
000000
The Israeli Air Force has dominated the middle east for the past 30 years. They have bombed pretty much whoever they want (Iran, Iraq, Syria, Lebanon) and no one has been able to hit back. Israel has the best technology and they know how to use it. Israel has long-range stand-off weapons that can hit Iran without requiring Israeli planes to fly within range of Iranian air defenses. Iran only has a small handful of long-range missiles that can reach Israel. Most of Iran's rockets are short and medium range that can't reach Israel.
Cooler Heads
1 May 2018, 01:10 GMT
000000
Newsfeed
0
New firstOld first
loader
LIVE
Заголовок открываемого материала
Access to the chat has been blocked for violating the rules . You will be able to participate again through:∞. If you do not agree with the blocking, please use the feedback form
The discussion is closed. You can participate in the discussion within 24 hours after the publication of the article.
To participate in the discussion
log in or register
loader
Chats
Заголовок открываемого материала
Worldwide
InternationalEnglishEnglishMundoEspañolSpanish
Europe
DeutschlandDeutschGermanFranceFrançaisFrenchΕλλάδαΕλληνικάGreekItaliaItalianoItalianČeská republikaČeštinaCzechPolskaPolskiPolishСрбиjаСрпскиSerbianLatvijaLatviešuLatvianLietuvaLietuviųLithuanianMoldovaMoldoveneascăMoldavianБеларусьБеларускiBelarusian
Transcaucasia
ԱրմենիաՀայերենArmenianАҧсныАҧсышәалаAbkhazХуссар ИрыстонИронауОssetianსაქართველოქართულიGeorgianAzərbaycanАzərbaycancaAzerbaijani
Middle East
Sputnik عربيArabicArabicTürkiyeTürkçeTurkishSputnik ایرانPersianPersianSputnik افغانستانDariDari
Central Asia
ҚазақстанҚазақ тіліKazakhКыргызстанКыргызчаKyrgyzOʻzbekistonЎзбекчаUzbekТоҷикистонТоҷикӣTajik
East & Southeast Asia
Việt NamTiếng ViệtVietnamese日本日本語Japanese中国中文Chinese
South America
BrasilPortuguêsPortuguese
NewsfeedBreaking
19:29 GMTTrump to Give Sworn Deposition in Mexican Protesters’ Lawsuit
19:23 GMTFrom 'Favourite of Presidents' to 'Test Tube Secretary': World Responds to Colin Powell's Death
19:04 GMTUK Daily COVID-19 Cases Almost 50,000 - But are Fatalities Also Rising?
18:48 GMTNATO Regrets Russia's Decision to Suspend Work of Missions
18:25 GMTIran Maintains Huge Arsenal of Missiles, Drones Despite Sanctions, Commander Says
18:25 GMTUS 'Not Pessimistic' About JCPOA Vienna Talks With Iran, But Says They Cannot Go on Indefinitely
17:24 GMTRoma Boss Jose Mourinho Blasts Juventus After Ugly Spat Erupts Between Players of Serie A Teams
17:05 GMTMeet Alexandra Hunt, a Former Stripper Who is Running For US Congress in Pennsylvania
17:04 GMTRemembrance Service for MP Amess in Westminster
16:32 GMTFBI Reportedly Helping Secure Release of 17 Missionaries Taken Hostage in Haiti
16:21 GMTUS Setting Up DHS Migration Monitoring Center to Track Illegal Aliens' Movements, Reports Say
16:19 GMTNo Room for Error: Democratic Strategists Pessimistic About Party's Prospects in 2022 Midterms
16:14 GMTSecond Largest US Television Operator Sinclair Broadcast Hacked With Ransomware
15:59 GMTEngland Must Play in Empty Stadium as Price for Riot by Ticketless Fans at Euro 2020 Final
15:50 GMTFrench Forward Kylian Mbappe's Latest Message Triggers Speculation About His Future With PSG
15:30 GMTWatch Police Crack Down on Protesters in Rotterdam Amid Dutch Housing Crisis
15:19 GMTAllies of Former French President Sarkozy Stand Trial for Alleged Polling Fraud
15:17 GMTUK Ex-Minister Says EU Is Trying to Break Up UK as ‘Price of Brexit’
15:13 GMTJanuary 6 Could Be Washington's Part of FBI’s Multi-State Operation Cold Snap, Argues US Observer
15:05 GMTPrivate Security for MPs Mulled by Westminster, as PM Paid Tribute to Murdered Sir David Amess