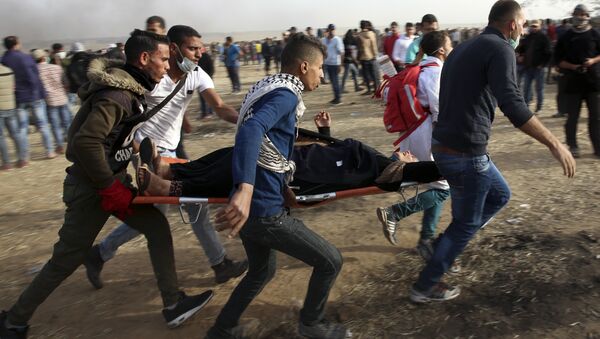 The UN Security Council should take immediate action to ensure that the rights of Palestinians are protected. This is what Palestine's Ambassador to the UN - Riyad Mansour - stated as the Great March of Return protests on the Gaza border entered its fifth consecutive week. Sputnik discussed this with Eran Etzion, an Israeli diplomat and strategist.

Sputnik: How is Israel managing to stand its own ground on the international arena in view of the ongoing protests on the Gaza border?

Eran Etzion: Frankly I don’t think there is that great of a pressure, I think there is an understanding that what we are witnessing is not entirely innocent. Yes, there is a civilian element in terms of organizing these demonstrations. But at least as much, if not more, there is Hamas instigation. Hamas is under extreme pressure because of its complete inability to manage Gaza. It’s on the verge of bankruptcy and a humanitarian crisis because of this failure, so they’re doing what other Arab regimes in similar circumstances used to do, which is to try to “export” the internal crisis towards Israel. I think there’s a great degree of understanding in the international community of this basic condition; that is, not to justify any killing or the injuring of innocent civilians, and if such cases did occur Israel already said that it will investigate, and it’s investigating.

Sputnik: Palestine's ambassador to the UN has called on the Security Council to take immediate action to ensure that the rights of Palestinians are protected. Do you believe that anything will come of that? And they're planning to continue these protests, there are reports of Israeli soldiers shooting live fire into the legs of civilians, some civilians have suffered amputations, there’s been journalists killed…

Three More Palestinians Shot Dead at Gaza Border - Israeli Military
Eran Etzion: As I said, any irregularities are being investigated and will be investigated, but you have to appreciate the situation on the ground, there are tens of thousands of demonstrators that have been warned by the Israeli authorities and actually by some of the organizers, the innocent organizers, not the Hamas organizers, that they should maintain a certain distance from the fence separating Gaza and Israel in order to stay away from the IDF and any potential bullets or other means that are being fired at instigators, and those that have stayed away have not been harmed, those that have been trying to storm this fence and to create damage to Israeli property or to cross into Israel have been dealt with according to the IDF’s internal command.

Sputnik: So causing damage to Israeli property is punishable by death or the risk of live bullets?

IDF Claims Downed Iranian UAV "Armed With Explosives" Tasked to Attack Israel
Eran Etzion: No this is covered by the army regulations. Listen. Let’s be very clear, there are those that are innocent and should not be harmed, and by and large are not being harmed. But there are those who are trying to take advantage of the situation in order to commit either real terror attacks, and some have actually been made — they've been actually photographed and you can see those videos, and they’ve been taken care of by the IDF. There are those who are storming the fence and trying to illegally cross the border into Israel, this is not punishable by death but it is within Israel’s right to self-defense to prevent, and this is what Israel is doing.

Sputnik: The protests are expected to culminate in mid-May, what can we expect in the weeks to come? And what kind of a resolution could you foresee? And will this further complicate the situation for Netanyahu?

Eran Etzion: I don’t know if it’s going to come as good or bad news to you but I don’t think there’s going to be anything out of the ordinary on this date (Nakba day*). It is speculation, obviously, and I could be wrong, but if I am to guess I would say yes there will be demonstrations, yes. There might be masses, but I don’t think that at the end of the day it will leave any kind of a historic mark, it will be just another sad day with unnecessary Palestinian casualties, but that’s it, it’s not going to change the basic situation of the Palestinians.