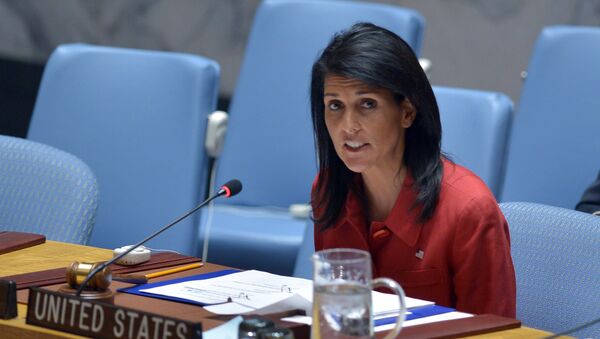 © AFP 2021 / Jewel SAMAD
Subscribe
Russian academic, journalist and political commentator Gevorg Mirzayan has written a pointed article explaining why the 'Trump-Russia collusion' conspiracy theorists may have to add another name to their list, but not for the reason one might assume.

Another 'Russian agent' has been identified in the United States who has earned if not a Hero of Russia medal, then at least the Order for Merit to the Fatherland. We're talking about Nikki Haley, the US's permanent representative to the UN Security Council.

Earlier, Haley might have only been suspected of working for Russian intelligence, having carefully discredited the US position with her emotional outbursts in response to her Russian colleague Vasily Nebenzya's arguments. She just didn't have the facts about 'Assad's use of chemical weapons in Eastern Ghouta', or the 'Kremlin's poisoning of the Skripals in Salisbury'. What did anyone expect of her?

However, the other day, Comrade Haley exposed herself. With one statement, she managed to discredit the whole of US foreign policy. The essence of her remark was that 'since the US gives money to the UN, the international organization should vote exactly how Washington wants it to.'

US No Longer Has Resources to Start Full-Scale War Against Iran - Prof
"The American people pay 22 percent of the UN budget – more than the next three highest donor countries combined. In spite of this generosity the rest of the UN voted with us only 31 percent of the time…[This] is not an acceptable return on our investment," Haley said in a speech on Thursday evening.

Furthermore, the ambassador came down hard on countries which receive cash from the US, but vote the 'wrong' way. "President Trump wants to ensure that our foreign assistance dollars – the most generous in the world – always serve American interests, and we look forward to helping him see that the American people are no longer taken for granted," she noted.

The reason for Haley's indignation was Voting Practices in the United Nations 2017, a report issued by the State Department which showed which countries have been supporting the US position in the UN General Assembly, and which have not. In the opinion of the White House, the figures in the report are very unfortunate. The index of support for the US in the General Assembly in 2017 was low – just 31 percent. 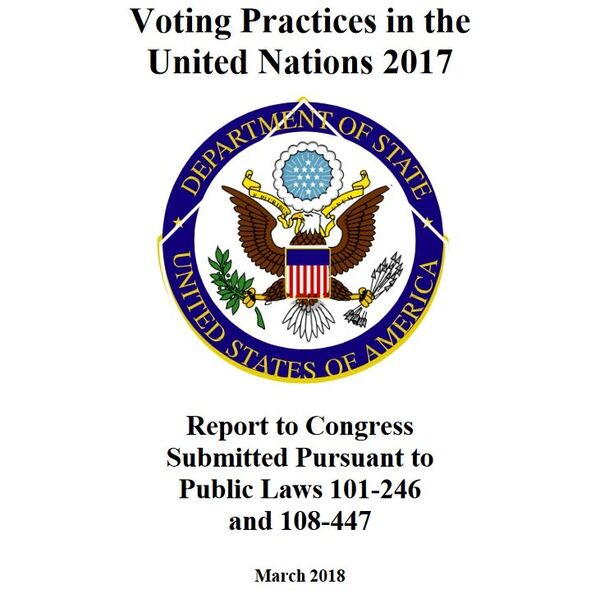 If we proceed from the indicators (which give one point for a coinciding vote, half a point if the country abstained, and then divide this up by the total votes, except in situations where both countries abstained), the US's best friend in the General Assembly is Israel, with a voting coincidence index of 94 percent. In second place is Canada, with 69 percent. As for the rest of America's allies, Washington should have some questions. Saudi Arabia and Qatar have a voting coincidence of 25 percent, Pakistan only 24 percent, and Afghanistan and Iraq 21 percent apiece. Many African countries hover in the range of 20 percent. Even the 'evil Russians' have a better percentage – 30 percent coincidence. The US may have questions for its European allies, too. Even faithful US satellites like the Baltic countries, Poland and Ukraine have a support rate of just over 50 percent.

Germany Warns Against EU-US Trade War, as 'Transatlantic Relations Are at Stake'
This isn't the first time that Haley has expressed outrage over the lack of support for the US at the UN; the first time she did so was after the vote on the status of Jerusalem in 2017. However, back then, this could be written off as a show of emotion after the vast majority of the US's allies didn't support its decision to recognize Jerusalem as Israel's capital.  By repeating and reinforcing this idea now (and openly hinting that these countries will see reductions in their aid funding) Haley has seriously discredited the position of her country.

Moscow, for its part, has already called on the ambassador to remember elementary math, and recall that the US's high share of funding for the UN budget is based on the historical practice of funding being based on a country's share of global GDP.

Secondly, Russia reminded Haley to consider not only how much the UN owes the US, but how much the US owes the UN. Russian Foreign Ministry spokeswoman Maria Zakharova recalled that "the US's unpaid contributions in 2018 (including for the year 2017), which include contributions to the UN's general budget, contributions for peacekeeping and international tribunals, amount to $2,278,520,306.88. At the same time, the US debt to the budget to the UN for 2018 is $938,376,277.47. Since 2011, the US has not paid into the budget of the United Nations Educational, Scientific and Cultural Organization (UNESCO). In 2017, the US withdrew from UNESCO altogether. Its debt to this organization stands at over $540 million." 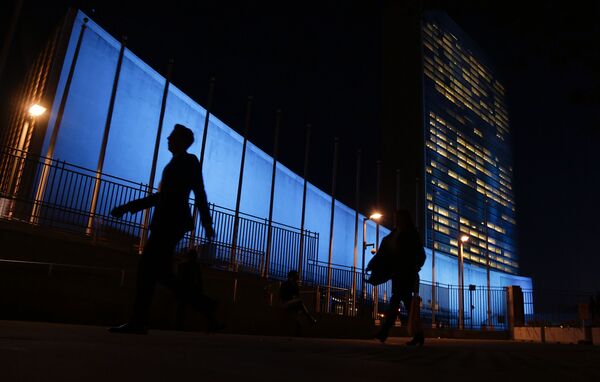 Pedestrians walk by United Nations Headquarters, lit up in blue light, a day in advance of the 70th Anniversary of the U.N., in New York City. File Photo.
© AP Photo / Julie Jacobson

However, Haley's main service to Moscow is not about the inaccuracy of her calculations, but the fact that the ambassador, in Zakharova's words, "has admitted that the US buys its international solidarity, and that such loyalty has a very specific price."

On first analysis, Haley didn't say anything new. Only idealists wearing rose-colored glasses would believe that strong countries help weaker ones out of the kindness of their heart. Great powers, whether it be the US, the USSR, or in its own time the UK, always paid for other countries' loyalty, doing so through investments, humanitarian aid, or direct bribes to individual politicians or the military. That's just how the world and international relations are arranged.

Haley's problem is that the great powers who pay for other countries' loyalties never talk about it in public. This is at a minimum improper, and 'improper' not in any moral sense, but from a sober calculation: why humiliate your satellite in the eyes of its own public? Why publically put a country in its place? After all, problems surrounding loyalty can always be resolved without airing the dirty laundry in the street.

Shuttle Diplomacy: What's Behind Macron's Three-Day Visit to Washington
Unfortunately for the United States, doing so is no longer possible. In fact, Haley's statement is a manifestation of the systemic crisis of US foreign policy. Along with the rejection of diplomacy and the emphasis on the use of force to achieve foreign policy goals (as spelled out in President Trump's doctrines on defense and national security), public threats against allies demonstrates Washington's loss of a number of its instruments of soft power.

This is not the first time in history that this has occurred. The vast majority of great powers (from the Ancient Greeks to France under Louis XIV to the German Empire), while at the peak of their military might, neglected diplomacy and its most important instrument: bribery, preferring to solve their problems by force.

As a result, diplomatic instruments were dulled, after which these empires suffered overreach, the loss of military superiority and the inevitable fall from the throne. Today the United States is in the penultimate stage of this fall, with President Trump's policy catalyzing (although not initiating) the process. Trump simply came upon already existing problems, and did not hesitate to speak about them out loud. 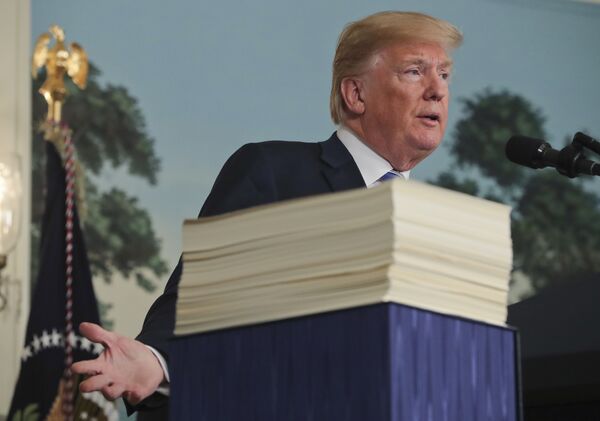 Moreover, Trump and Haley don't have any plans to solve these problems by returning to soft power and strengthening American dominance in the world. The president's attitude toward his allies, his doctrine of 'America First', the emphasis on the return of industry to the United States, shows that he wants to cure the disease by amputation — by getting rid of the status of the world's manager and the costs which such a status carries with it. That's why he publically presents his client states with the new rules of the game. Those who agree will be forced to publically renounce their sovereignty. Those who are unhappy can wave goodbye to American humanitarian aid which, according to Trump, should go to domestic projects in the US anyway.

Moscow can only support such an approach, and not out of a consideration for the welfare of ordinary Americans. The Kremlin has long been fighting to deflate globalist myths about the West helping everyone, about the West being unselfish and striving only for the common good. Donald Trump and Nikki Haley and their straightforward statements only strengthen the Russian position. In other words, they have earned medals. Both of them.

Gevorg Mirzayan is an associate professor at the department of political science at the Russian Financial University and a Rossiya Segodnya contributor. The views and opinions expressed in this article are those of the contributor and do not necessarily reflect those of Sputnik.