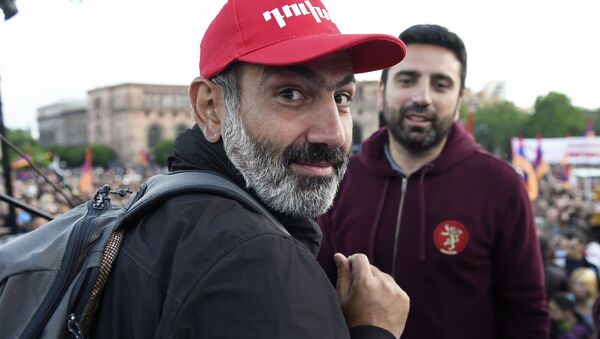 © Sputnik / Asatur Yesayants
/
Go to the mediabank
Subscribe
International
India
Africa
YEREVAN (Sputnik) - Armenian opposition leader Nikol Pashinyan was officially nominated by the Way Out Alliance (Yelq) party's parliamentarygroup as a candidate for the post of the prime minister, member of the faction Ararat Mirzoyan told reporters on Monday.

"The group proposed Pashinyan's candidacy for the post of prime minister, and today Yelq will hold meetings with the other three factions of the parliament, including the ruling Republican Party of Armenia (RPA)," Mirzoyan said.

The parliamentarian expressed confidence that all the lawmakers worried about the fate of the country would vote for Pashinyan.

Earlier in the day, the Armenian Revolutionary Federation party said it would back Pashinyan for the position of prime minister. The ruling Republican Party of Armenia (RPA) decided not to field a candidate.

World
US Offers Support for Armenian Leader's Effort to Promote Dialogue Amid Crisis
A political crisis in Armenia broke out earlier in April after ex-President Serzh Sargsyan was nominated as prime minister. This has been largely regarded as Sargsyan's attempt to stay in power following two terms since the newly amended constitution transferred some of the presidential powers to the head of government.