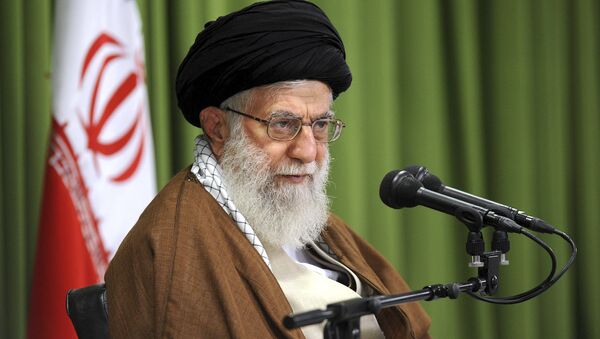 © AP Photo / Office of the Iranian Supreme Leader
Subscribe
International
India
Africa
Supreme leader of Iran Ayatollah Khamenei threatened the United States and its allies during a Monday speech to workers leading up to International Workers’ Day. The remarks came in response to a Sunday attack on a base in Syria that killed a number of Iranians.

Khamenei told a crowd of "thousands of laborers and entrepreneurs" from across Iran that the United States is trying to pit Muslims against one another, according to the leader's official website. "The US incites the Saudis in order to create conflict in our region. Why don't they incite the Zionists? Because they want Muslims to fight against Muslims," Khamenei reportedly said.

Sunday night, an airstrike on was conducted against the 47th Brigade of the Syrian Arab Army, a unit made up of Iranian forces and forces from Hezbollah, a Lebanon-based international army that has been fighting for the government in Syria. The attack hit a military base somewhere between Hama and Homs killing 18 Iranians, according to the Jerusalem Post. However, Israeli newspaper Haaretz, citing an official from the Iran-Hezbollah-Syria coalition, said 16 people were killed, including 11 Iranians.

Nobody has taken responsibility for the attack on the 47th Brigade and the Pentagon has denied knowledge of any operations in the area. However, many in pro-government circles have accused Israel of conducting the strike.

The attack comes just a few days after Israel's ambassador to the United Nations told the Security Council that Iran has 80,000 Shiite "extremists" under its command in Syria and less than a month after Syria's T-4 airbase was struck, killing seven Iranians. Israel was also blamed for that attack but did not own up to it publicly, Sputnik reported.

"It was the first time we attacked live Iranian targets — both facilities and people," an IDF member told the New York Times, although the paper retracted the comment after protests from IDF officials.

The strike against the 47th Brigade was also just a day before Israeli Prime Minister Benjamin Netanyahu warned, alongside US President Donald Trump, that he has evidence of an active Iranian nuclear production scheme, which would be a violation of the country's nuclear agreement with the US and five other world powers. Trump is expected to refuse to reauthorize the agreement, thereby shattering the deal, as Iranian officials have stated they will pull out as well if the United States does, Sputnik News previously reported.

Khamenei said that the US' grand scheme includes equipping countries hostile to Iran. "If these countries are wise, they won't get involved in a conflict against Iran. But, if they enter a war with Iran, they will certainly be struck down and defeated," he said. "The Americans want to avoid the costs of confrontation with the system created by the Islamic Revolution."

Referring to attacks on Iranian forces in Syria, Khamenei said "I previously mentioned during the term of another US president, the time of hitting and escaping is gone; now, if you hit, you will be hit back. They know that if they attack, they will receive stronger counterattacks."

Khamenei stressed the contributions of workers several times in the speech. He said that today, a war against Iran is being conducted by the US Treasury Department — the agency responsible for issuing sanctions — and that Iran could fight back by investing in its economy and creating jobs.

Khamenei said that everywhere the US has a presence, it has worsened the security situation. "For the same reason the presence of the US in Western Europe must be obliterated, they must leave our region. The one who must leave is the US, not the Islamic Republic. We are from this region: the Persian Gulf is our home; West Asia is our home," Khamenei declared.