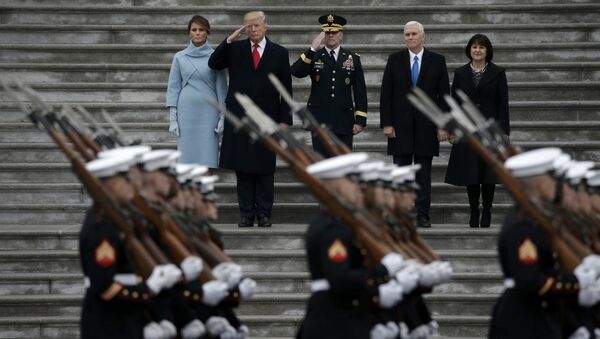 The world awaits President Trump's May 12 decision on whether or not to extend the Iran nuclear deal. Speaking to Radio Sputnik, Hamed Mousavi, a professor of political science at the University of Tehran, outlined what he believes are Washington's true motives in its attempt to pressure Iran into making new concessions.

Sputnik: Professor Mousavi, do you think Donald Trump's criticism of the nuclear agreement has to do with the deal itself and its terms, or is there something bigger going on?

Hamed Mousavi: Actually, most of the elite in the United States, including people in the intelligence community, and even recently a person like Mike Pompeo who is the head of the CIA and is now is being considered for secretary of state, have acknowledged that the nuclear deal is in fact in the interest of the United States.

‘Not a Question of Arguments’: Merkel, Macron Can’t Get Trump to Save Iran Deal
Nevertheless, I think what the Trump administration is trying to do is to get concessions in areas where previous administrations have failed. One of those main issues is the balance of power in the Middle East. In Iraq and in Syria, events have not turned out the way the United States and its allies such as Israel and Saudi Arabia have wanted. As a result, they are essentially using the nuclear deal to pressure Iran to give concessions in other areas in other areas such as, for example, in Syria.

Sputnik: Iranian President Hassan Rouhani has threatened Washington with severe consequences if Donald Trump scraps the accord. How do you think Tehran would respond?

Hamed Mousavi: I don't think they have made a final decision in Iran regarding how to respond if Trump decides to leave the nuclear deal on May 12. I think there are three possible scenarios of Iran's reaction. The first is that Iran continues the deal with the Europeans, Russia and China without the United States. The second scenario is Iran leaving the nuclear deal.

The third scenario, which has actually become a bit more popular among some segments of Iranian society, is to leave the NPT [Treaty on the Non-Proliferation of Nuclear Weapons] altogether. Because people are very upset, even right now, even without the United States leaving the nuclear deal. In the past two years, Iran has really not benefited from the economic advantages it was supposed to receive under the deal. This has largely been because of the Trump administration's constant threatening to unravel it.  The result of those threats, even without the United States leaving the deal, has been that a lot of businessmen in Europe and other countries are very concerned regarding investing in Iran. The result of that has in turn been that Iran has not received the economic benefits it was hoping to receive. 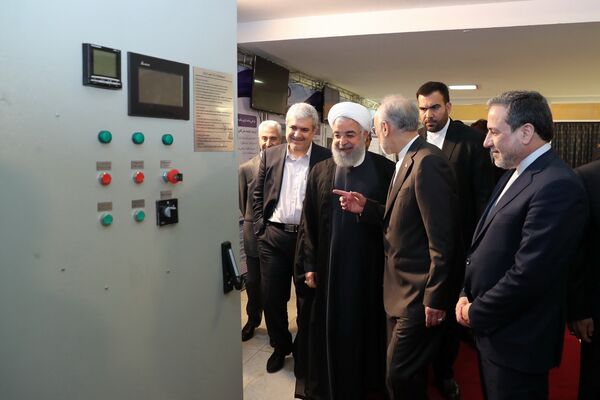 Sputnik: Professor Mousavi, other signatories of the agreement have been calling on Mr. Trump to preserve the deal. Moreover, the International Atomic Energy Agency (IAEA) has said that Tehran has complied with the agreement. So why do you think Mr. Trump so vehemently opposes the deal?

Hamed Mousavi: You know, under the JCPOA, the only party authorized to assess Iranian compliance with the deal is the IAEA. The IAEA in the past two years has issued nine reports, all of them confirming the full compliance of Iran with its obligations under the nuclear deal. So there is no question over there whatsoever.

Sanctions Against Tehran Won't Work – Iranian Military Chief of Staff
However, I think with the Trump administration there are two important aspects of why he doesn't like the deal. The first one is that it was signed by the previous administration, the Obama administration, and Trump essentially wants to undo anything that Obama has done. This will be good for him politically in domestic US politics; his supporters would like this kind of policy.

The second one, as we have pointed out earlier, is the issue of trying to get more concessions from Iran on other issues such as Iran's regional policies as well as its missile program.

All the while, you have to understand that in the Middle East, the only nuclear power is Israel, which actually has over 200 nuclear weapons. So on the one hand, Israel is getting a free pass, allowing it to develop even nuclear weapons; it's not even a member of the NPT. On the other, the Trump administration is asking Iran to give up even its conventional defense missiles. So you can imagine why this is basically a non-starter for Iran. I don't think Iran will accept these new demands by the US administration. 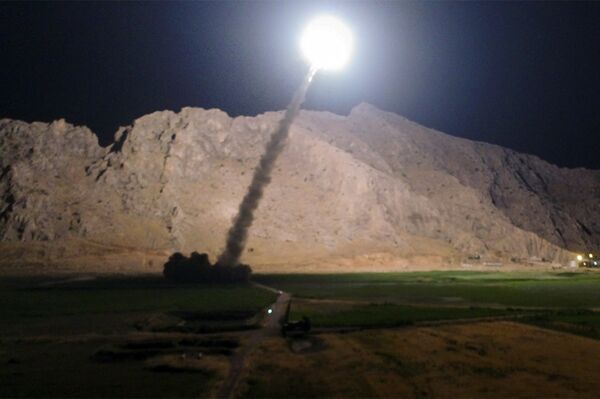 In this picture released by the Iranian state-run IRIB News Agency on Monday, June 19, 2017, a missile is fired from city of Kermanshah in western Iran targeting the Islamic State group in Syria
© AP Photo / IRIB News Agency, Morteza Fakhrinejad

Sputnik: How would other signatories of the nuclear agreement react if Donald Trump decides to terminate the deal?

Hamed Mousavi: This will all depend on how he terminates it, because the United States has two sorts of sanctions on Iran. There are the primary sanctions, which punish US companies doing business with Iran. They also have secondary sanctions. These are sanctions that punish any country that does business with Iran; so even if it's a European or Russian or Chinese company, they will get punished by the US administration.

If Donald Trump decides to leave the nuclear deal on May 12, there is the possibility of a so-called soft exit, in which he exempts certain countries from those sanctions. So he can come out for example and say that 'we will exempt Germany and France from the secondary sanctions'. What that will do is basically allow these European companies to do business with Iran.

If however he doesn't exempt these countries, it will be very difficult for them to continue with the deal, even if they want to. Even though they might denounce the Trump administration for leaving the deal, essentially the deal will die. Because it's not possible for Iran to continue the deal with Europe and with Russia and China, when the United States is saying that they will punish and sanction any company that does business with Iran. 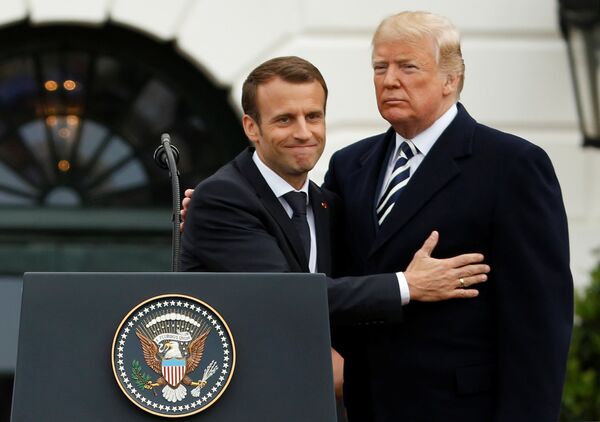 Sputnik: In his speech to US Congress, the French president said that while the agreement with Iran may not address all concerns, it should not be abandoned without having something more substantial in its place. But he added that Iran should never possess nuclear weapons because that would put the international community at risk. The question is, why is the international community so opposed to Iran having a nuclear program? The United States alone has over 6,800 warheads, and plans to increase its nuclear capabilities. Pakistan and India have nuclear weapons, and are not signatories to the NPT. Professor Mousavi, does a hypothetical Iranian nuclear program really pose a danger to the international community?

Hamed Mousavi: Here is the problem: under the present nuclear deal, Iran is obliged to never, ever develop nuclear weapons. That is part of the text. And even according to the US administration, they don't really believe that the US is going after the bomb.

From Money Loss to New Conflicts: What May Happen if Trump Rips Iran Deal Up
I'll give you an example. A few weeks ago, Mike Pompeo, in the Senate confirmation process before the Foreign Relations Committee, was asked about Iran's nuclear weapons program. He said that Iran has actually never been after a nuclear weapon, either before the JCPOA or after. This is coming from Mike Pompeo, who is a hawk. So even he is admitting that it's not a weapons program, but a civilian program aimed at energy production.

Nevertheless, I think [the US is] using these excuses, essentially to pressure Iran and to shift the balance of power in the Middle East.

We have to understand that in the Middle East, the United States in the past ten years has been on the retreat. The Iraq War has been disastrous for them; they had to withdraw most of their forces. The War in Afghanistan is not going well for them after 17 years. The balance of power in Syria has completely changed, and one or two airstrikes is not going to change that. So essentially they are using other excuses to change the balance the power in the Middle East. I don't think it has anything to do with Iran developing nuclear weapons… 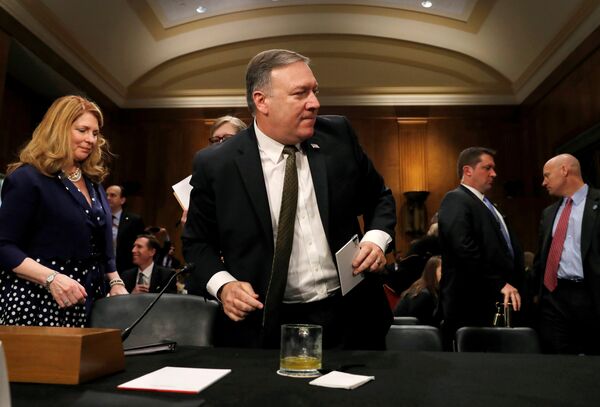 CIA Director Mike Pompeo leaves his seat for a break after testifying before a Senate Foreign Relations Committee confirmation hearing on Pompeo's nomination to be secretary of state on Capitol Hill in Washington, U.S.
© REUTERS / Leah Millis

Sputnik: What's the endgame? Is it Syria?

Hamed Mousavi: I think the end goal is to shift the balance of power in the Middle East so it becomes similar to how it was in the 1990s. After the fall of the USSR, the United States was essentially the sole and undisputed superpower in the Middle East. However, in the 2000s, beginning with the wars that they started themselves, in Iraq and in Afghanistan, the situation in the Middle East has become very tense, and at the same time the Americans have suffered, both financially and in terms of lives; they've lost a lot of soldiers here.

The end result of that has been that not only has the balance of power come out of their favor, but they have actually lost a lot of their power. [This has led to] the rise of regional powers such as Iran, and the rise of powers outside the region such as Russia. The Americans don't like that at all. Essentially they want to be the sole power in the Middle East and to call the shots. 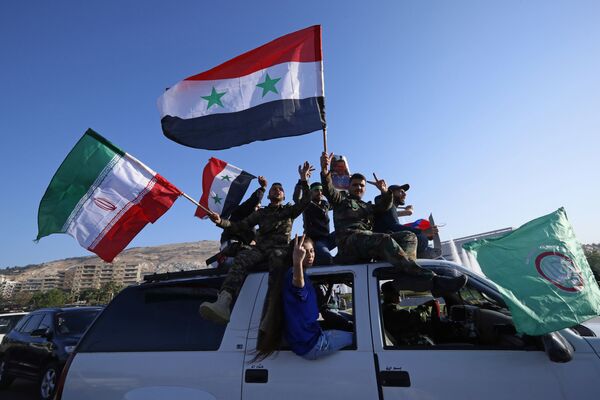 Sputnik: Reports say that Iran may resume its nuclear program if Donald Trump abrogates the nuclear deal. Earlier the US leader threatened Iran with 'big problems' if Tehran decides to do that. What are we talking about here? Is there a risk of military confrontation between Tehran and Washington?

Hamed Mousavi: A few months ago, the debt of the US for the first time in its history passed over $20 trillion. So the US government is not doing well financially. Last year, it had a budget deficit of $666 billion. That is expected to rise to $1 trillion per year by 2020. So essentially, the United States, from a financial perspective, does not have the resources to start a full-scale war.

Also, public opinion in the United States is against any kind of invasion, such as the invasion of Iraq in 2003. Because of that, the Trump administration, regardless of its very aggressive rhetoric, is not really in a position to launch full-scale wars anymore. This is why, in Syria for example, we saw missile strikes, but nothing in the sense that they could change the military balance in Syria. I think that applies to Iran as well. They can apply sanctions, they can apply diplomatic pressure, but from a military perspective, I don't see that they can attack Iran anytime soon.

Listen to the rest of Sputnik's interview with Dr. Mousavi below.

The views and opinions expressed by Hamed Mousavi are those of the expert and do not necessarily reflect those of Sputnik.