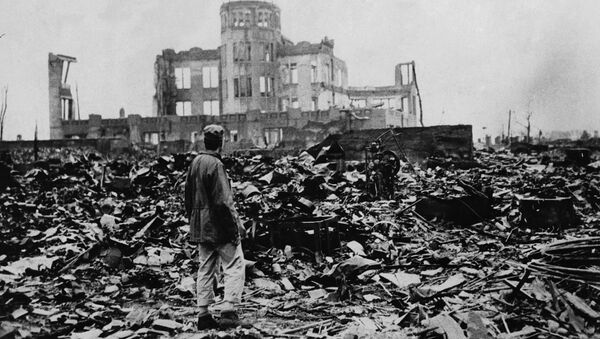 The nuclear attack on Hiroshima on August 6, 1945 led to an estimated 146,000 deaths, half of them in its aftermath, including as a result of deadly radiation.

New research by Brazilian physicists studying a bone fragment belonging to a casualty of the Hiroshima bombing discovered that the victim had been exposed to a staggering 9.46 grays (gy) or joules of radiation energy per kilogram, or nearly double the estimated 5 gray considered fatal in the event of full-body exposure.

The bone fragment, a jawbone belonging to a victim who was one kilometer from the epicenter on the day of the attack, was analyzed using paramagnetism, the phenomenon which makes human bones weakly magnetic following their exposure to x-ray or gamma-ray irradiation. This marker allowed researchers to estimate the amount of radiation absorbed.

The estimate was made more precise using a technique known as electron spin resonance spectoscopy. In addition, the Brazilian physicists took advantage of improved instrumentation and digital data processing techniques.

The study is a breakthrough in the sense that while scientist had some idea of the effects of the 'Little Boy' bomb in Hiroshima, they did not know the precise level of radiation to which city residents were exposed.

New US Nuclear Posture Review Spurs Outrage Among Atomic Bomb Victims in Japan
In addition to its historical significance, the study has contemporary relevance as well, the scientists said. "Imagine someone in New York planting an ordinary bomb with a small amount of radioactive material stuck to the explosive," Oswaldo Baffa, study coauthor and professor at the University of Sao Paulo, said. "Techniques like this can help identify who has been exposed to radioactive fallout and needs treatment," he explained.

The nuclear bombing of Hiroshima and Nagasaki at the close of World War II was the first and thus far only use of nuclear weapons in wartime. President Harry Truman's decision to drop the bombs remains controversial to this day. While the Truman administration argued that the bombings prompted Japan's surrender and thus avoided a costly US amphibious invasion, some historians have also reasonably argued that other factors, including the Soviet Army's successful offensive against Japanese forces in Manchuria, prompted the Japanese to give up. Researchers supporting the latter view pointed to the fact that US firebombing of Japanese cities throughout the war had already destroyed over 60 Japanese cities prior to the atomic bombings of Hiroshima and Nagasaki, but did not prompt Tokyo to surrender.

President Barack Obama became the first sitting president to visit Hiroshima in May 2016, but stopped short of apologizing for the bombings. In total, the attacks were estimated to have killed upwards of 226,000 people.