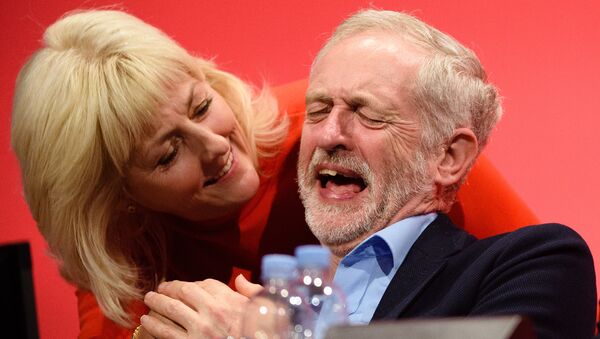 © AFP 2021 / LEON NEAL
Subscribe
The social media are puzzled and amused at the UK media reports about "Russian bots" on Twitter, who allegedly attempted to mold the outcomes of the general election last year in favor of the Labour party and its leader Jeremy Corbyn.

A joint investigation conducted by The Sunday Times and Swansea University claimed that 6,500 accounts, many of which were internet robots, had sent messages supporting the Labour Party before the UK general elections on June 8, 2017. Then, the Labour leader defied expectations, lifting the support for his party from 30% in 2015 to nearly 40%, leaving Prime Minister Theresa May and her Conservative party with 42%. This let the Labour Party get 30 seats more in the British Parliament.

Commenting on the report, the Party said, sited by The Telegraph newspaper, that “The Labour Party’s people-powered election campaign attracted huge levels of public support online. We were not aware of any from automated bots, categorically did not pay for any and are not aware of any of our supporters doing so.”

The timing as well as the spirit of the allegations has ignited discussions on Twitter. Some connected the upcoming elections and the article…

The Sunday Murdoch runs a story saying Russian bots tried to swing an election four days before the May 3rd local elections.
Anyone see the irony here?#VoteLabourMay3rd

Russian Bot story is utter nonsense! Proof will be seen on Thursday when millions of so-called bots who support #JeremyCorbyn's fairer vision of society turn up to vote. The media & Conseravtives running scared & desperate hence @BBCNews discuss Bots story as if fact. @MarrShow

I'm not a #RussianBot. I'm not going to change my Twitter handle to ironically pretend I am. I don't know why Russia would want a Corbyn government, much less Labour-lead councils on #May3rd. This whole thing is a distraction. See image for what #Tory councils do. #LE2018 pic.twitter.com/C6RTbpHL57

​Other commentators pointed out at the lack of evidence and bias.

Looking at the "Corbyn bots" story, it's the same researchers who claim that Russian bots swung #Brexit and, apparently, pushed for "#indyref2". But I can't find any technical info on their work — A December 2017 paper references the work, but mentions it's unpublished. Anybody?

Its the narrative of the MSM presstitutes. First they lied About Trump and Russians. Steele Dossier, a lie about Salisbury Chemical attack. BOJO got caught out.Then the lied about Syria chemical attack that lie exposed in the Hague. Now Corbyn…SUE

OMG. Russia is no longer communist. It is uber capitalist and as a consequence is more likely to support the Tories than Corbyn. The Times is a Murdoch owned paper; the vanguard of the 1% attempting to scare the bewildered herd. Lets stop this Twitter bot 4 Corbyn nonsense. #marr

​…or noted any bots can’t influence their opinion, formed independently.

I worked in an ED. I don't need a Russian Bot to tell me the Tories are destroying the country. #marr

"Everybody I disagree with is a Russian bot!"

​The investigation has come just three days ahead of the local elections in England. Council and mayor elections are scheduled for May 3. It’s going to be the first England-wide vote since the 2017 general elections.

A YouGov poll by London’s Queen Mary University and the Mile End Institute found the Labour Party to be on course for its best performance in London at the local council level in 40 years, with just over 50 percent of responders saying they will be voting for Labour.

It’s not the first time Russia has come under fire in the UK for alleged cyber-threats and manipulating public opinion via social media. Less than two weeks ago, a fresh British government study claimed that Russia had used trolls to spread fake news on social media after the Salisbury poisoning.
Earlier this year, Theresa May in her turn demanded in her speech: “I have a very simple message for Russia. We know what you are doing. And you will not succeed.”

No proof of its meddling has been provided. Moscow has repeatedly refuted the allegations of interference in the elections of other countries, stressing no evidence has been given.

Jeremy Corbyn has repeatedly come under fire for confrontations with Prime Minister Theresa May on some matters. Before the 2017 snap general elections, he called for deescalating existing tensions with Russia.

"We will work to halt the drift to confrontation with Russia and the escalation of military deployments across the continent," Corbyn said then, as quoted by the press service of the Labour Party.

This spring the Labour leader drew criticism when he called on the UK government to "not rush ahead of the evidence" in the Skripal investigation. He also called on the UK government to provide Russian investigators with a sample to determine where the nerve agent came from, while the British government claimed it was of Russian origin. At the same time, some did praise his stance, while many others condemned the media's recent coverage of Corbyn's position on the Skripal investigation.