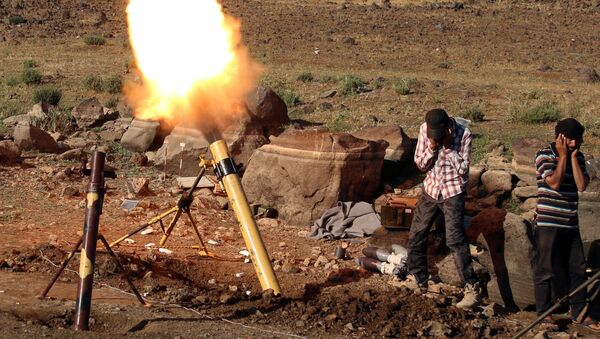 © REUTERS / Alaa Al-Faqir
Subscribe
Austrian military forces found themselves in hot water as journalists brought a 2012 incident into the light, prompting public uproar and a governmental inquiry, as UN soldiers from Austria reportedly followed an order to not interfere and let Syrians die under fire.

The Austrian government has launched an investigation into allegations that, in the wake of the Syrian conflict, the country’s Blue Helmets deliberately led local policemen into an ambush on the Golan Heights, following orders from their command.

On April 28 the spokesman for the Defense Ministry, Michael Bauer, posted on Twitter that the investigation had commenced.

​The commission started working this morning. First, all notifications, orders, laws and regulations that may be relevant to clarification are collected, reviewed and evaluated. The UN is invited to cooperate.

The public uproar arose after a local magazine "Falter" revealed a video from a whistleblower, which allegedly shows how Austrian peacekeepers on the Golan Heights watch smugglers preparing an ambush. Then a vehicle with Syrian secret policemen arrives, but the Blue Helmets don’t warn them that there are going to be ambushed. The police’s pickup keeps moving and eventually gets attacked. According to UN reports, 13 gunmen killed nine policemen. According to the media, citing a UN peacekeeper, the attack was an assassination attempt on one of Syria’s top intelligence officials. The terrorists came to the buffer zone on the Golan Heights from Lebanon on purpose, aware that the UN peacekeepers wouldn’t be able to do anything, as a former Blue Helmet who was stationed with the UN group on the Golan Heights revealed to the newspaper Salzburger Nachrichten.

He said that the order for the Austrians was: “Do not interfere." The man named Markus H., who didn’t reportedly take part in the incident, claimed that the soldiers on video had "acted 100 percent correctly according to our mandate."

The ex-peacekeeper noted that if his fellow soldiers warned the policemen, they would have become targets, exposing themselves to a fatal threat, as the Blue Helmets didn’t have ammunition and bulletproof vests.

He also stated that when the conflict in Syria escalated in 2011, the situation on the Israel-Syrian border became more dangerous for the peace group, causing problems for them, as the militia often blocked their provisions.

The representative of the Defense Ministry stated to the local broadcaster ОЕ-24.TV that the soldiers couldn’t act on their own, as they had to follow their orders. Ex-Defense Minister Norbert Darabos, who occupied the post in 2012, wasn’t aware of the incident and claimed that those guilty should be punished. Meanwhile, the Austrian news agency APA reported, citing a UN spokesman, that the incident was therefore known as the UN Security Council was informed that the Blue Helmets had witnessed policemen being shot by 13 gunmen in the buffer zone. The UN had stated that it would work with the Austrian authorities to investigate the case.

An Austrian group of the UN peace contingent stayed on the disputed Golan Heights, which has remained an apple of discord between Tel-Aviv and Damascus, since the seventies. The western two-thirds of the Golan Heights (known in Syria as the Quneitra governorate) was annexed by Israel during the Six-Day War in 1967, which has been repeatedly condemned by the UN. The dispute over the territories has not only prevented Syria and Israel from signing a peace treaty, but has also provoked tit-for-tat strikes in the border areas.

At the same time, the eastern Golan Heights, which has remained in Syrian hands, became the target of the al-Qaeda-affiliated al-Nusra Front, as well as Daesh* militants and other Syrian opposition forces. In 2012 Austria remained the only European country to remain in the area. The decision to withdraw their troops came only in 2013 after tensions in the border area grew as the conflict in Syria deepened.