Encouraged by the American anti-China lobby, Australian scholars and politicians have stepped up their criticism of Beijing, academics told Sputnik. Calls for teaming up against China's growing influence do not correspond with Australia's national interests, they added.

While the Trump administration is exerting pressure on China in the ongoing tariff war, an anti-Beijing lobby in Australia has seemingly followed suit.

On April 26, Australian academic Clive Hamilton, the author of "Silent Invasion: China's Influence in Australia," which was rejected by the publisher Allen & Unwin over fears of reprisals from Beijing, told a US congressional committee chaired by Senator Marco Rubio, that Beijing is waging "psychological warfare" against Australia.

"Last week the People Liberation Army's (PLA) Navy challenged three Australian warships sailing through the South China Sea, simply for being there. It has scaled up its threats of economic harm unless Australia changes its ‘anti-China' path. This psychological warfare is only stage one, with real punishment to follow if needed," Hamilton claimed, as quoted by The Guardian.

Speaking to Sputnik China, Alexander Larin, a leading researcher at the Institute of Far Eastern Studies of the Russian Academy of Sciences, underscored that Australia maintains close economic ties with China and is actively trading with it, while Chinese investments in the country are growing annually.

"These [developments cause] fears similar to those that exist in the US," he explained. "Some of China's opponents call for teaming up to stop China and prevent the transformation of the world into a 'Pax Sinica.' The situation with Clive Hamilton is one of the steps in this direction. Such sentiments are strong both in the United States and in Australia, so it is hardly surprising that two anti-Chinese lobbies have united."

US Air Force Bombers Buzz Over the South China Sea
On March 13, Senator Rubio published an op-ed in The New York Times with the eloquent title "To Fight China on Trade, We Need More Than Tariffs."

"The so-called China shock, the impact of China's entry to the international trading system, wiped out more than 2.4 million American jobs from 1999 to 2011," Rubio wrote, calling for new tough trade measures against Beijing.

Chinese analysts are well aware of the anti-China campaign promoted by US and Australian politicians, the Russian academic noted. According to Larin, China is developing counter-measures and adjusts its economic policy to reduce or even nullify the propaganda pressure exerted on Beijing. 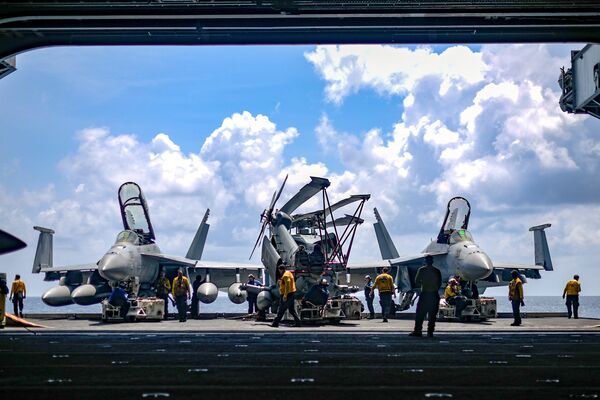 The director of the China Institute of International Affairs' Center for South Pacific Studies, Shen Shishun, shares Larin's stance, suggesting that Hamilton's testimony appears to be nothing but a politically charged allegation.

"While speaking to the US Congress and cursing China, the Australian scientist clearly wanted to please those Americans who do not understand China and are not friendly to it, seeing it with a jaundiced eye," he said.

World
US Attorney General Pressed to Document China Harassing Overseas Dissidents
While Hamilton was formally criticizing China, his speech marred the image of Australia, as it was inconsistent with the facts, the Chinese scholar pointed out.

Thus, the Australian academic claimed that while being on route to Vietnam, Australian warships had been "challenged" by Chinese military vessels in the South China Sea.

However, a week ago the Chinese Defense Ministry rejected this narrative, which had been earlier spread by some Australian media outlets, stressing that China had acted professionally and lawfully during "the encounter."

According to Reuters, The Australian Defense Department confirmed that three Australian warships had recently traveled to Vietnam, but did not disclose any "operational details related to ships transiting the South China Sea."

Commenting on the anti-China rhetoric, Shen emphasized the inclusive nature of the Beijing-led "One Belt, One Road" initiative, which has brought together the countries of the Asia-Pacific region.

"The whole ideology of the project One Belt One Road corresponds to the principle of 'joint consultations, joint construction and joint use.' In the past, a number of ASEAN [Association of Southeast Asian Nations] countries also viewed China as a threat. However, today the results of ASEAN's cooperation with China convince its partners that China's rise plays an important stimulating role in the development of Southeast Asia."

Trade War With China Will Have a Boomerang Effect, Hit US Interests – Analyst
Hamilton's testimony followed the release of a Center for Strategic and International Studies (CSIS) report, namely "Countering China's Militarization of the Indo-Pacific," authored by Michael Green, a special assistant to the president for national security affairs under President George W. Bush, and Andrew Shearer, a former security aide to ex-Australian Prime Minister Tony Abbott.

Citing rumors of China's alleged plan to build a military base in Vanuatu — which was previously denied by Beijing — the paper urges the United States, Japan, Australia and India to team up in order to resist the Chinese "expansion" in the Indo-Pacific.

It also suggests that Washington and Canberra should "increase interoperability through an expanded Malabar exercise series and to establish a rotational presence of US surface combatant vessels at HMAS Stirling in Western Australia," among other measures.