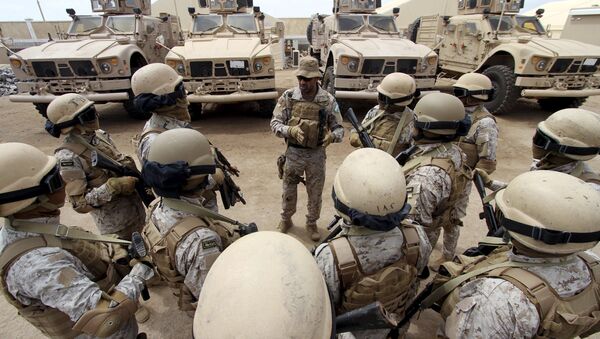 © REUTERS / Faisal Al Nasser/Files
Subscribe
Doha and Riyadh have yet to reach a compromise on who should pay for the US military presence in Syria. Speaking to Sputnik, a Lebanese retired general expressed doubts regarding the dispatch of troops by the Gulf kingdoms, while an Omani analyst opined that the US wants Qatar as its spearhead in the region.

Even if the Kingdom of Saudi Arabia (KSA) sends its troops to Syria, the US military contingent is unlikely to pull out, Lebanese retired Major General Hisham Jaber, the head of the Middle East Center for Studies and Public Relations, suggested in an interview with Sputnik Arabic.

"As for sending military forces from the Persian Gulf countries, which I doubt for a number of reasons, it will be necessary to cut the Americans' spending on the war," Jaber opined. "Even if Saudi troops suddenly arrive in Syria, Washington will not completely withdraw its military servicemen anyway. The Americans will remain in some capacity — it will depend on the size of the Saudi army — but it will be the kingdom that will pay for it."

On April 25, Saudi Foreign Minister Adel al-Jubeir stated that it is Qatar who should fund the US military presence in Syria and send its forces. Otherwise, the minister continued, Washington would withdraw its troops from its military base located in Qatar and the government of Sheikh Tamim Bin Hamad Al-Thani would fall within a week. Two days earlier Riyadh signaled its willingness to send its fighters to Syria.

Gulf States on the Horns of a Dilemma: Who Should Pay for War in Syria?
On April 3, while hosting a delegation of three Baltic States, US President Donald Trump remarked that if the Gulf kingdom wants him to stay in Syria, they are "going to have to pay" for it.

Later, The Wall Street Journal reported that the Trump administration is seeking to replace the US military contingent in Syria, which Trump wants to withdraw from the region "as quickly as possible," with Arab soldiers. Additionally, Washington asked Saudi Arabia, Qatar and the United Arab Emirates to help restore northern Syria once Daesh (ISIS/ISIL)* is defeated.

"Saudi Arabia, Qatar and the UAE have all been approached with respect to financial support and more broadly to contribute," a Trump administration official said, as quoted by the media outlet.

Commenting on the issue, the retired major general cast doubt on the US readiness to fight against Daesh: "Looking at the map of Syria we see how peacefully the terrorist enclaves are coexisting with the US military forces in the east of the country," Jaber noted.

US Choppers Allegedly Evacuate Daesh Militants Amid Trump's Vow to Attack Syria
Previoulsy, on April 10, Syria's SANA news agency reported that US military helicopters allegedly evacuated several Daesh commanders from the al-Hasakah province. The reported evacuation has become yet another case in a series of similar episodes allegedly involving US forces and the terrorist group.

Similarly, the retired major general has thrown into question the potential dispatch of the KSA military forces in Syria. According to Jaber, Riyadh and Doha are likely to become mired in a debate about who should pay and to whom the troops will be subordinate to. The latter issue is very important given the current conflict between the states, the retired general emphasized, referring to a diplomatic row that has simmering between Doha and its Gulf neighbors since June 2017.

Therefore, a joint financing of US forces in the region could become a viable alternative to the Gulf kingdoms, Jaber suggested. 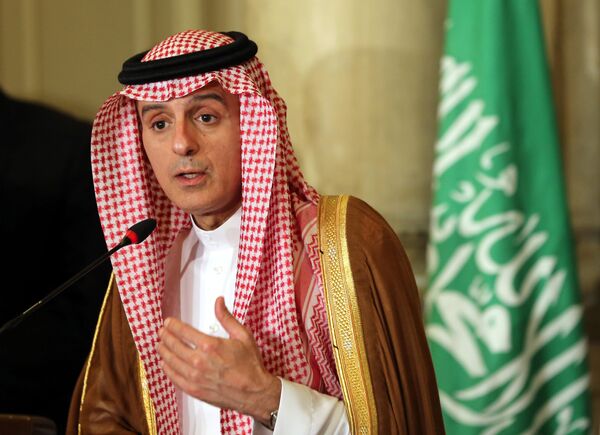 Why US Wants 'Qatar to Implement Its Plans in the Region'

For his part, an Omani political analyst specializing in Middle Eastern affairs, Ali al-Mashaani, believes that the US wants Qatar to deploy its military forces in Syria.

According to al-Mashaani, the US has adopted a "dual political approach" towards Qatar's role in the Syrian crisis. On the one hand, American politicians are expressing gratitude to the emirate; on the other hand, they are calling upon Doha to stop supporting terrorism, the Omani analyst underscored.

"Now Washington wants to get out of this difficult situation," he noted. "Qatar will have to legitimize its position and openly implement American plans in the region."

Saudi political analyst Mubarak al-Ati shares a similar stance: According to him, Doha was the major addressee of Trump's calls to contribute to the US-led alliance.

"It is obvious that Trump's statements were directly addressed to Qatar," al-Ati stressed.

However, Doha has not demonstrated much enthusiasm about funding the US military presence in Syria and sending its troops there yet. Responding to al-Jubeir's statement, Minister of Foreign Affairs Sheikh Mohammed bin Abdulrahman Al-Thani denounced Riyadh's call as an attempt to influence public opinion.

"This statement [by the Saudi Foreign Ministry] is not worthy of an answer. Qatar refutes the brainwashing of public opinion in the Arab world in such a way," Al-Thani said. "[Doha insists] on developing a political solution to the Syrian problem."