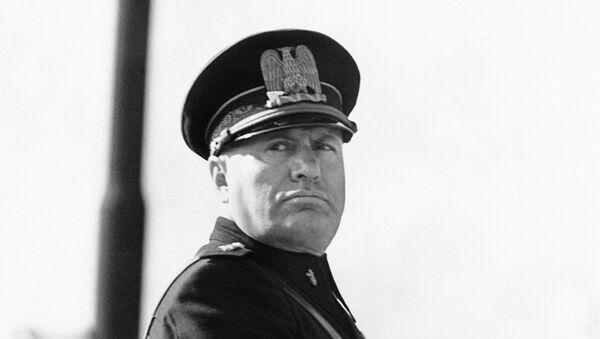 © AP Photo
Subscribe
An antifascist group in Italy has reportedly celebrated the anniversary of the country’s liberation during World War II by hanging a huge doll of Il Duce stuffed with candy and inviting kids to smash it.

A large piñata depicting Italian WWII fascist leader Benito Mussolini was hung in the city of Macerata on April 25, a national holiday known as Liberation Day which commemorates the end of the Nazi occupation of the country, local media outlets report.

The piñata was fashioned in the form of a uniform-clad bald man giving a fascist salute and was hung upside down just like the remains of Mussolini following his execution at the hands of communist guerillas in 1945.

​The event was apparently organized by a local antifascist collective, which invited children to hit the dummy with a stick to get the candy inside, according to Picchio News.

The city’s mayor, however, insisted that this event had nothing to do with the official Liberation Day celebrations and described it as "an unacceptable provocation that betrays the true meaning of April 25th, stains antifascism itself and harms the city."

Benito Mussolini, the head of the National Fascist Party who governed Italy from 1922 till 1943, was executed together with his mistress Clara Petacci by Italian communist guerillas on April 28, 1945.

Following their demise, the bodies of Mussolini and Petacci were brought to the city of Milan where they were hung upside down from the roof of a gas station.