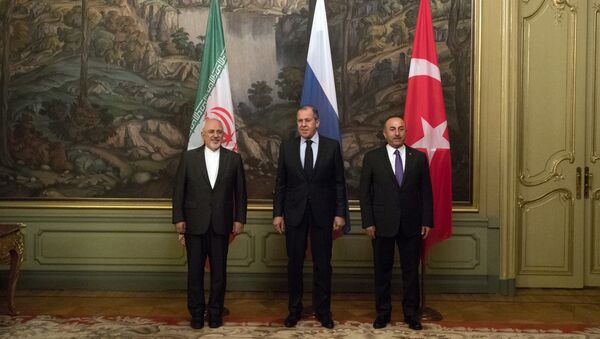 The top diplomats of the three countries serving as guarantors of the nationwide ceasefire in Syria have given a joint press conference focusing on the prospects for a political settlement in Syria.

Foreign Minister Lavrov began his remarks by pointing out that the US, French and British coalition airstrikes against Syria on April 14 were conducted before the Organization for the Prohibition of Chemical Weapons (OPCW) had completed its investigation into the alleged chemical attack in Douma on April 7.

These strikes, he said, "seriously aggravated the situation," and were an indication that US statements about supporting Syria's territorial integrity were "only words which, apparently, cover plans for reformatting the Middle East and dividing Syria into parts."

The Russian foreign minister added that Russia, Iran and Turkey are resolute in their agreement on "the absolute inadmissibility of attempts to divide Syria along-ethno-confessional lines."

Lavrov emphasized that peace efforts should not be accompanied by any preconditions, such as the demands made by some opposition forces that the Syrian government resigns. Such preconditions are "highly destructive," he said, and aimed at complicating the resumption of the negotiation process.

The foreign minister said Saturday's talks will help further consolidate the three countries' efforts to abide by Resolution 2254 of the UN Security Council, which calls for a ceasefire and political settlement in Syria.

Lavrov noted that the UN can play a major role in helping the Astana process develop in several key directions. This includes assistance with the ceasefire regime in the so-called deescalation zones. The foreign minister urged armed opposition groups to drive terrorists out of these territories, and stressed that the UN can play a role in making clear to the opposition not to make alliances, temporary or otherwise, with the jihadists.

Secondly, he said, the UN can assist in the campaign to help Syrians return to a normal life, including via its humanitarian agencies. Moscow can assist in convincing Damascus to show more flexibility regarding these aid efforts. The UN must also take efforts not to limit aid to opposition-held areas, according to Lavrov.

Thirdly, the UN can help in facilitating political dialogue. The Astana process, culminating in the Sochi conference, achieved more than any other process, and formed the basis for Syrian settlement, the foreign minister said.

Ultimately, Lavrov said that UN Syria envoy Staffan de Mistura's criticism of Astana and Sochi was odd, given what these platforms have achieved. The Sochi declaration remains the main instrument for de Mistura to implement his mandate on Syria under UN Resolution 2254, Lavrov noted.

For his part, Iranian Foreign Minister Zarif stressed that the Astana peace process was the main instrument in bringing lasting peace to Syria. There was no military solution to the Syrian crisis, he emphasized.

Zarif pointed to the upcoming Astana summit in May, whose topics will include prisoner exchange.

The Iranian foreign minister also stressed that as a victim of chemical weapons use in the past, Tehran condemns the use of such weapons by any party, and hopes that an objective investigation on the ground in Syria by the OPCW will find the truth. He added that those countries who supported Iraq during its use of chemical weapons against Iran have no right to accuse Damascus today.

Zarif stressed that the world community has a responsibility to assist Syria, which has successfully fought against the terrorist groups such as Daesh (ISIS)* and al-Nusra,* in reconstruction efforts.

The Iranian foreign minister also accused the United States of sowing discord between various factions and groups in Syria. US policy is counterproductive, he said, and has helped to further spread extremism in the region, from Iraq to Afghanistan.

Zarif was also asked about the Iran nuclear deal, and said that President Trump's demands to alter the deal were a violation of Washington's international obligations, and "unacceptable" for the Iranian people.

For his part, Foreign Minister Cavusoglu said that Saturday's talks saw discussion on a whole gamut of issues related to the Syrian crisis and the Astana peace process. He also reiterated Turkey's support for the country's territorial integrity.

Cavusoglu said that the shared goal of the three guarantor countries was to provide Syrians with a normal life, to provide humanitarian aid, and ultimately to find a political solution to the crisis. The upcoming meeting in Astana will be "one more step" in solidifying the ceasefire and bringing peace to Syria, he added.

Cavusoglu urged every actor in the world community, including those presently trying to torpedo the political process, to contribute to the peace process instead.

The Turkish foreign minister urged all terrorist groups, including Kurdish YPG militia (which Ankara considers a terrorist entity), to leave Syria once and for all, and to return control of these territories to the Syrian people. He accused Washington of supporting Kurdish terrorist organizations in Syria. Cavusoglu stressed that terrorism needs to be systematically eradicated in the wartorn country, including in Idlib governate.

Some Don't Want Peace in Syria

Ahead of the press conference, Sergei Lavrov said that Moscow believes that collective measures were necessary in the Astana peace talks format to normalize the situation. He also reiterated that Russia, Turkey and Iran need to work together to help Damascus clear the wartorn country of terrorists.

The Russian foreign minister added that unfortunately, "the events of recent weeks have shown that not everyone seems to want peace in Syria. Every time hope emerges in the Syrian reconciliation, this hope is struck down. We have to acknowledge the ongoing attempts to derail the effort to build a dialogue between the Syrians, attempts to hinder the establishment of a constitutional committee."

Iranian Foreign Minister Zarif thanked Lavrov for Russia's hospitality, noting that he had "lost count" of the number of meetings he has held with his Russian counterpart. He added that Moscow and Tehran have reached a high level of understanding not only in security, but the economy as well. According to Zarif, the Astana platform for Syrian settlement was "the only initiative where Tehran cooperates with its Turkish partners, and this cooperation yields results."