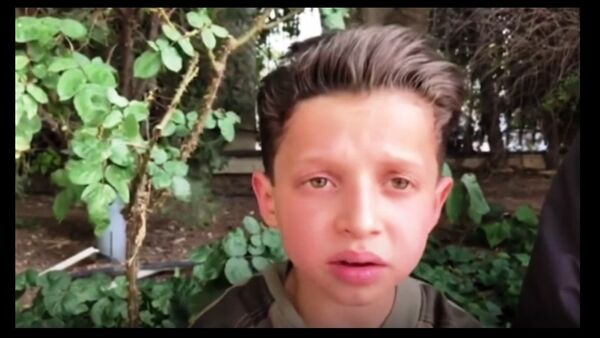 Ammar Waqqaf, an analyst specializing in the Middle East, discussed the press conference in the Hague, where Moscow's delegation to the Organisation for the Prohibition of Chemical Weapons brought witnesses, including an 11-year-old Syrian boy and his father, as well as local doctors, who revealed that the Douma chemical attack was a provocation.

Sputnik: An 11-year-old Syrian boy, whom the White Helmets used in their video about a "chemical attack" in Syria's Douma have spoken before journalists. How significant is this development what does it show?

Ammar Waqqaf: It’s quite significant. This is the first time an alleged chemical attack happened in an area that was pretty much under Syrian army control. This is the first time we’ve got to hear from a witness, so this is very significant. Because this particular boy appeared in very much of the video and was much of talking point, this nothing short of a coup. Here is a person who clearly suffered from something that everyone thought was a chemical or a poisonous substance that everybody had a theory about it, suddenly coming out saying nothing of the sort happened.

“We were just told to go to this point and that point and then drenched with water and somebody gave me something and I don’t know why”. It really shattered the whole narrative there that we’ve been hearing for the past two weeks.

Sputnik: With the release of these latest accounts and reports, how will the West likely react? Will their response change do you think?

Douma ER Doctor Exposes White Helmets' Lies About Alleged Chemical Attack
Ammar Waqqaf: No I don’t think it will. We’ve heard the counter narratives even before this and we need to take into consideration that they wouldn’t have made the attack or carried out the attack before the OPCW team arriving to the scene unless they knew pretty much for sure that was no real chemical attack and wanted to carry on with the strike no matter.

Since then, we have been hearing a certain narrative from the mainstream media saying that the Russians and the Syrians are disturbing the evidence and we might not find anything there as well as another narrative saying we don’t care about this attack, because the OPCW has proven 20 times that there have been 20 chemical attacks in Syria, but never pointed a finger to who did it; for sure they said its likely this or that party.

They retracted and it will be embarrassing somewhat, but, for example, yesterday delegates from the OPCW refused to attend saying it was a theatre and charade and so on.

I think when the OPCW team comes out of Douma saying there is nothing to say there was a chemical attack, people will say “Ok, we were probably deceived, but we all know it was Assad and we’re not going to retract”.

Sputnik: Now that it’s been revealed that these chemical attacks are not exactly what they seem, I must ask the question… why have we seen mainstream media organizations, NGOs and the west run with the details?

They don’t care about evidence and we’ve been monitoring that. Looking back at other similar instances, I remember when British Foreign Secretary, William Hauge, saying we have credible reports that the Assad forces did it and then later on all the UN investigation team could say was its most likely that Assad forces did it although nothing has been proven so far.

This has been carrying on for a while and they don’t care about evidence, they just want to use whatever opportunity they have to stamp authority and remind the Syrians and their allies, that they are still on the table and interest shouldn’t be ignored and they can stir things up, whatever they like.

The views and opinions expressed by Ammar Waqqaf are those of the speaker and do not necessarily relect Sputnik's position.