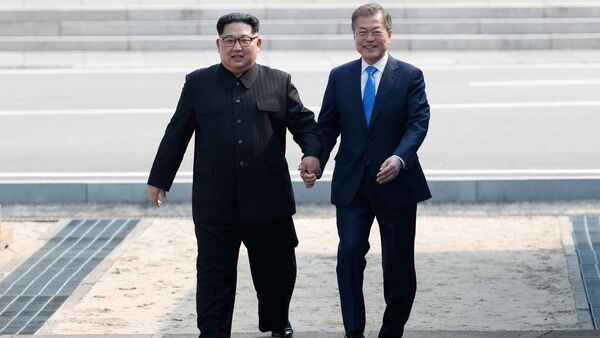 North Korean leader Kim Jong Un and South Korean President Moon Jae In sat down for a historic meeting Friday, in one of the most important global diplomatic breakthroughs in recent memory.

Following the much-anticipated meeting, it was revealed that Kim and Moon had pledged to denuclearize the Korean Peninsula and formally end the Korean War. Active hostilities ended in 1953 when an armistice agreement was signed, although no permanent peace treaty was ever agreed to.

​Speaking to Radio Sputnik's Loud & Clear, Tim Beal, professor and author of "Crisis in Korea: America, China and the Risk of War, " suggested that the summit shows both North and South Korea are committed to working things out."

"To some extent it's no surprise… both sides being committed to this summit, the South especially," Beal told show hosts Brian Becker and John Kiriakou. "It's very much freighted with symbolism, but the key question… is what it leads on to."

Fellow Guest Gregory Elich, member of the Solidarity Committee for Democracy and Peace in Korea and author of "Strange Liberators: Militarism, Mayhem and the Pursuit of Profit,"I think it's going to help change the narrative so that no matter what the Trump administration chooses to do in the future, if it wants to go in a more war-like direction, it's going to have to work a lot harder to build up justification for that and that's a big plus for the Korean people and for the world," Elich told Becker. "I think the part of the Panmunjom Declaration [the agreement signed by Moon and Kim Friday] that's most interesting is the economic aspect."

"It looks like the two Koreas want to reactivate old and abandoned economic agreements that previous conservative presidents in South Korea killed off. I think that economic integration has a real prospect of ensuring that peace stays in place," he added, stressing that "the entire region stands to gain if this goes in that direction."

But when it comes to whether or not North Korea would actually give up its nuclear weapons, Beal suggested it was unlikely to happen.

"My feeling is that it isn't [going to happen]… no government under threat has given up nuclear weapons, as it's considered the ultimate deterrent," Beal said. "Personally, I feel that the phrase ‘denuclearization of the Korean Peninsula' is not a good one. The objective is peace… nuclear weapons are a result of the lack of peace, so the emphasis should be on peace and how to achieve that rather than getting sidetracked on the question of nuclear weapons."

World
Trump on Inter-Korea Summit: Good Things Happening, But 'Only Time Will Tell'

"I think there's going to be a lot of fudging at the subsequent US negotiations. Trump, we understand, thinks he's going to a surrender ceremony but he's not… he's going to have to negotiate," he added.

Referring to a CNN opinion piece suggesting the US would have to stop sending its nuclear-armed ships to South Korean ports if denuclearization happens, Elich noted that just because peace is on the table doesn't mean the Land of the Free intends to stop doing whatever it wants.

"US is at peace with how many different nations across the world and it hasn't deterred them from sending ships here and there and putting bases all over the world," Elich told Kiriakou. "It does reveal a panic by Washington elites and the media that it could lead to pressure from the Koreans to remove US forces stationed there."

However, Elich doesn't see US forces leaving the peninsula, which are roughly 24,000-strong.

"I don't see that happening… the US military isn't in the habit of respecting the wishes of any people and no matter what any Korean thinks… the US Forces Korea is there to stay," he said.