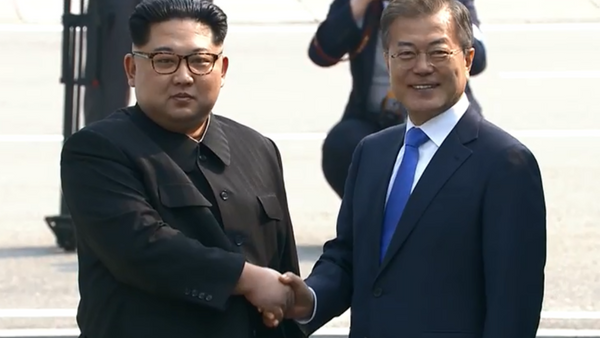 The one-day summit between the leaders of the two Koreas was the first rare chance for the rest of the world, especially the general public in South Korea, to have unfiltered and unscripted access to the young leader from North Korea, who took power following his father’s death in late 2011.

Despite appearing a little nervous when he first crossed the military demarcation line to shake hands with Moon, Kim Jong-un showed that he is not very different from other leaders in the world today, making jokes and giving spontaneous responses on various occasions.

When Moon asked Kim Jong-un when he can visit North Korea, after the two shook hands, Kim responded by stepping across the military demarcation line to the Southern side and saying "why don’t we go over now?" The two leaders crossed back to the Northern side together holding hands and led to an unplanned photo taken with both standing on the North Korean side of the military demarcation line.

The North Korean leader even acknowledged the underdeveloped state of the nation’s transportation system, compared to that in South Korea, during talks with the South Korean president.

"What worries me about president Moon visiting us is that our transportation system is deficient, and you might find it uncomfortable. Those who went to the PyeongChang Olympic Games have said how fast the PyeongChang high-speed train is. Because you are used to this in the South, you might be disconcerted when visiting the North. We will prepare so that we can make your stay comfortable," Kim Jong-un said.

The North Korean leader’s performance at the summit impressed many political analysts in South Korea.

"Kim Jong-un was the influencer today. He was the main event. He outperformed and outshined Moon, largely because of the moments we have not seen from a North Korean leader. He was the center of attention today. He did that deliberately and those were all the choices he made. He had an agenda today, which is to steal the show. I think he did a very good job at it," James Kim, an international relations expert at the Asan Institute for Policy Studies in Seoul, told Sputnik.

"I was quite surprised to see the humane side of Kim Jong-un, something that isn’t expected to come from this reclusive leader. For him to throw around those jokes, it was quite extraordinary. When he was crossing the borderline, he looked to be quite nervous. But when he warmed up, he was very natural. He didn’t look like a leader who had been reclusive for the past six years. He left a pretty good impression on South Korean population," Kim Jae-chun, an international relations professor at Sogang University in Seoul and a former South Korean government adviser, told Sputnik.

"He looked quite different from his father’s style. Kim Jong-il wasn’t really that outspoken. Although he [Kim Jong-il] tried very hard to appear as if he was a very audacious leader, there was a lot of reclusive part of Kim Jong-il’s leadership. Kim Jong-un is playing to his strength. His father was quite reserved, thinking before talking. It seems Kim Jong-un talks before he has straightened out his thoughts on certain things. He understands that he has to be a very skilful diplomat for North Korea," he said.

Professor Kim from the Asan Institute for Policy Studies believes the North Korean leader has demonstrated that he is willing to work on peaceful solutions to the nuclear crisis on the Korean peninsula.

"One thing is very clear from this summit is that Kim Jong-un is very much intent on engaging in a charm offensive and dialogue with not just South Korea, but also other stakeholders. He has shown there’s a willingness to come to South Korea and engage in a dialogue on the South Korean soil. That has never happened before. He’s also shown his will to be vulnerable when he made a press statement after walking with Moon on the bridge. In many ways, this shows a willingness we have not seen before from Kim Jong-un. What that means is that he’s very much intent on continuing down this path of engagement and he wants to see some kind of diplomatic solution to the crisis at the moment," he said.


Despite Kim Jong-un’s charisma at the summit, the joint statement released following his meeting with Moon lacked concrete steps on how North Korea plans to denuclearize, South Korean experts argued.

The Seoul-based expert stressed the importance of concrete actions toward denuclearization.

"He [Kim Jong-un] is putting on a very good show. But ultimately, at the end of the day, the key issue here is denuclearization. He needs to show some measurable actions on those fronts. Without convincing proof that he is committed to denuclearization of North Korea, none of this diplomatic fanfare really means anything. The reason why Moon, [US President Donald] Trump and Chinese President Xi Jinping are willing to sit down and talk to Kim Jong-un is because of denuclearization. It’s not because of how nice of a guy he is. He needs to show a credible commitment to denuclearization, which means real actions, not just words," the expert said.

The expert noted that the wording in the joint statement from the summit also seems to tilt toward North Korea’s favour.

"If you read the joint statement, it’s more advantageous to North Korea. That’s because a lot of South Korean experts are saying it has to be more than just agreeing on the principle of denuclearization. There has to be a more concrete agreement on what kinds of steps North Korea has to take and what the end state of denuclearization would look like. North Korea’s definition of denuclearization could be quite different from South Korea or the United States. The joint statement is a bit disappointing, to be honest. If this is it, I don’t think the Trump administration would be too happy about the outcome of the [inter-Korean] summit," he said.

The joint statement from the summit, known as Panmunjeom Declaration for Peace, Prosperity and Unification of the Korean Peninsula, only had one paragraph mentioning denuclearization.

According to the joint statement, both nations agreed to a number of tension reduction measures such as ceasing hostile acts against each other, carrying out disarmament in a phased manner and pursuing the end of the Korean War by turning the armistice into a peace treaty.

However, Professor Kim from Sogang University suggested that the tension reduction measures would face certain limits before the bigger issue of denuclearization could be resolved.

"There’s going to be a limit on how much you can reduce conventional weapons, although both parties agreed on arms reduction. Unless there’s going to be important progress in North Korea’s dismantlement of its nuclear weapons, there’s a limit to which this conventional arms reduction measures could proceed. That’s because there’s a bigger problem. If both countries reduce conventional weapons and withdraw forwardly deployed artilleries, but there are no measures taken about denuclearization, both nations will face certain limits. This is why the progress of denuclearization has to move forward before other tension reduction measures can proceed in a sincere manner," he said.

Professor Kim from the Asan Institute for Policy Studies also voiced concerns over how US President Donald Trump would respond to the results of the inter-Korean summit.

"The question is how Trump reads this latest development. Will he stop acting impulsively here and throw away the summit [with Kim Jong-un] before it happens in June. Even if there’s an agreement in June, can Trump also change his mind [in the future] and undo what he was able to accomplish here. Those are all very strong possibilities, given what we’re seeing right now with Trans-Pacific Partnership, free trade agreements and Iran [nuclear agreement]. With or without the summit, Trump is the unknown factor here," he said.

"Overall, I don’t expect to see any surprises from North Korea. I do worry about the possibility that Trump might do something that is unexpected, in order to better his position before the meeting [with Kim Jong-un] in June. Trump is the ultimate disrupter. He may try to do something in order to get an upper hand in the negotiation. He’s known to do this. He said such things in the past before meetings with other leaders. I wouldn’t be surprised if Trump throws a curve ball, between now and June, making the media go wild because of a tweet he sends out," he said.

Following the inter-Korean summit, Kim Jong-un is expected to meet with Trump in May or June for the first official summit between current leaders of the two nations.

000000
Popular comments
I have just watched the video of the two Leaders leaving the building in the de-militarised zone and must say I am impressed, very impressed by what I saw: I saw manners, distinction, friendliness, respect, humility ( yes, again), culture, refinement, and much more, and realised that HISTORY was being written, a date to remember. I was also surprised by Pres. Moon how he conducted himself, so dignified, friendly, natural, respectful. The North Korean Leader showed himself to the world, maybe for the first time, and I wish that all the world watches this video, he appears to be a refined man, with knowledge, culture, has distinction as well, and there is no doubt that one could F E E L the atmosphere , the warmth of the Meeting, and the sincerity of it all. No matter what, the wheels are now turning.... there is no turning back now. Well done Korea, warm congratulations , Forward in Faith, a foreigner very far from you salutes you with respect.
armor
27 April 2018, 20:16 GMT1
000000
I think if it was the two of them to decide for the future of their people, it could be easier.
giorgoskaz11
27 April 2018, 21:25 GMT1
000000
Newsfeed
0
New firstOld first
loader
LIVE
Заголовок открываемого материала
Access to the chat has been blocked for violating the rules . You will be able to participate again through:∞. If you do not agree with the blocking, please use the feedback form
The discussion is closed. You can participate in the discussion within 24 hours after the publication of the article.
To participate in the discussion
log in or register
loader
Chats
Заголовок открываемого материала
Worldwide
InternationalEnglishEnglishMundoEspañolSpanish
Europe
DeutschlandDeutschGermanFranceFrançaisFrenchΕλλάδαΕλληνικάGreekItaliaItalianoItalianČeská republikaČeštinaCzechPolskaPolskiPolishСрбиjаСрпскиSerbianLatvijaLatviešuLatvianLietuvaLietuviųLithuanianMoldovaMoldoveneascăMoldavianБеларусьБеларускiBelarusian
Transcaucasia
ԱրմենիաՀայերենArmenianАҧсныАҧсышәалаAbkhazХуссар ИрыстонИронауОssetianსაქართველოქართულიGeorgianAzərbaycanАzərbaycancaAzerbaijani
Middle East
Sputnik عربيArabicArabicTürkiyeTürkçeTurkishSputnik ایرانPersianPersianSputnik افغانستانDariDari
Central Asia
ҚазақстанҚазақ тіліKazakhКыргызстанКыргызчаKyrgyzOʻzbekistonЎзбекчаUzbekТоҷикистонТоҷикӣTajik
East & Southeast Asia
Việt NamTiếng ViệtVietnamese日本日本語Japanese俄罗斯卫星通讯社中文（简体）Chinese (simplified)俄罗斯卫星通讯社中文（繁体）Chinese (traditional)
South America
BrasilPortuguêsPortuguese
NewsfeedBreaking
06:10 GMTThe Bennett-Lapid Government's First 100 Days: What Promises Have They Broken?
05:52 GMTPowerful Earthquake in Australia Damages at Least 46 Buildings
05:42 GMTUK Reportedly Mulls Joining US-Mexico-Canada Trade Deal as FTA With America Stalls
05:24 GMTBrazilian Health Minister, Who Arrived at UN, Says Contracted COVID-19
04:30 GMTA Sigh That Tells It All: Golden Retriever Wants Attention
04:28 GMTLive Updates: Germany Registers 10,454 New COVID-19 Cases
04:11 GMTFlorida Gov. Orders All State Agencies to Search for Laundrie After Petito's Remains Confirmed
03:43 GMT'Nothing New on That': Bill Gates Brushes Off Question About His ‘Dinners’ With Epstein
03:33 GMTGOP Politicians Stand by US Border Patrol After Claims They 'Whipped' Refugees at Rio Grande River
03:14 GMTPele Cheers Up Fans by Posting Video of Him Riding Exercycle in Hospital
03:07 GMTAxis of Resistance Killed US, Israeli Commanders in Revenge for Soleimani's Assassination - Report
02:56 GMTPolitical Capital & GOP in His ’Grip’: Trump ’Wants Back’ in 2024, Journos Say
01:43 GMTIRGC Chief: Iran No Longer Sees US as Threat - Report
01:18 GMTChinese Covid Vaccines Reach 100 Nations, But WHO Warns Africa Still Short 470 Million Shots in 2021
01:04 GMTAwkward Moment as White House Staff Cuts Off Biden-Johnson Meeting in Mid-Sentence
00:20 GMTVideo: Military Jet Intercepts Small Aircraft Over NYC in the Middle of UN General Assembly
00:19 GMTPark Ranger ‘Implored’ Gabby Petito to Distance Herself From Toxic Relationship With Brian Laundrie
YesterdayVideos: 6.0 Earthquake Strikes Southeastern Australia
YesterdayPro-Reunification Candidate Chang Ya-chung Edges Ahead as Chairman Election in Taiwan’s KMT Nears
YesterdayTexas Governor Vows to Prevent Del Rio Migrant Surge Disaster From Being Replicated