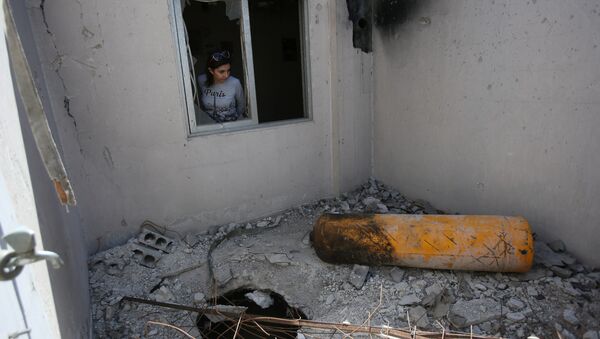 Syrian government troops are continuing to make surprising discoveries during their campaign to put an end to the war and reinstate order in the country.

"In the depot with chemical weapons left by terrorists in Douma, we have found chemicals from Germany, the United Kingdom, from the Porton-Down laboratory in Salisbury," Syria's deputy envoy to the Organization for the Prohibition of Chemical Weapons (OPCW) Ghassan Obaid said after a briefing in The Hague on April 26.

He called on OPCW experts to visit the site and expressed hope that it will finally dispel all allegations.

The envoy's statement echoes Russian Foreign Ministry spokeswoman Maria Zakharova's earlier statement that containers with chlorine and smoke bombs manufactured in Britain and Germany had been found in the territories liberated from militants in Eastern Ghouta.

Douma Doctors, Witnesses Reveal Lies Behind White Helmets' Provocation (VIDEO)
On April 14, the United States, the United Kingdom and France launched a massive missile attack on Syria over alleged reports of a chemical attack in the city of Douma.

The claims about what the West regards to have been a chemical attack were based on social media messages, as well as "proof" provided by the notorious White Helmets NGO. The White Helmets' footage has been proven to be fake by a boy whom the NGO forced to be filmed in exchange for food, his father, as well as a doctor in the hospital where the filming occurred. Russia had warned in advance that such a provocation would take place "to justify" an attack on Syria. The Russian Defense Ministry has accused London of participating in the preparation of the false flag incident.

Syria's President Bashar Assad has branded the attack as an act of "aggression," while Russian President Vladimir Putin has said that the airstrikes "violated the norms of international law, including the UN Charter and caused major damage to the process of peacefully settling the Syrian crisis."

A terrorist-held laboratory with chemicals was discovered earlier in Douma.