No Nobel? #MeToo Afterglow Casts Doubts Over 2018 Prize in Literature 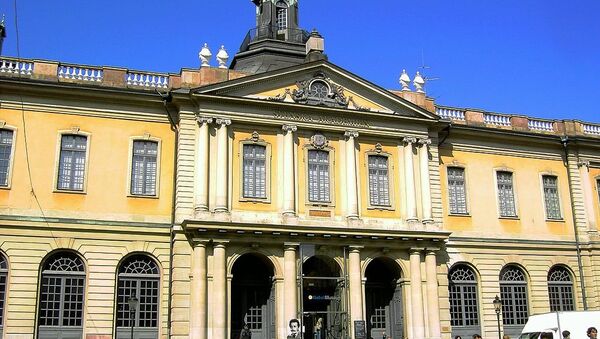 CC BY-SA 3.0 / Mastad / The Swedish Academy in Stockholm
Subscribe
The drawn-out crisis in the Swedish Academy following allegations of rape, sexual assault and leaking names of Nobel Prize winners, has already resulted in its first female secretary stepping down and may lead to no Nobel Prize in literature this year, with its reputation severely tarnished.

This year's edition of the Nobel Prize in literature could be cancelled after the Swedish Academy, the body that awards it, was hit by a streak of scandals, dubbed "the worst crisis in centuries," the Expressen daily reported.

The crisis, which has already brought down Sara Danius, the first female leader of the academy and resulted in six senior members resigning over the academy's vote to not remove her, erupted following investigations of sexual misconduct claims filed by 18 women against Jean-Claude Arnault. Arnault was also accused of having leaked the names of at least seven Nobel Prize winners in advance. He is a major figure in the Swedish cultural landscape married to poet Katarina Frostenson, a member of the academy. In Swedish media, he is mostly referred to as "the cultural profile."

The mass resignation of six members in protest against the academy's reputation being soiled following its vote not to remove its permanent secretary Sara Danius leaves only 11 members of the academy, whereas a quorum of 12 members is required to elect new members.

Nobel in revolving door: Jury of Nobel in Literature is down 6 members in 2 weeks. https://t.co/oHM3CFFwBo via @svtnyheter #knytblus

​Former academy member Peter Englund said it "might be best" to skip this year's Nobel Prize in literature altogether. Anders Olsson, who temporarily holds the post as permanent secretary, said discussions about the future of the Nobel Prize were underway. According to Expressen, a possibility currently under consideration involves giving out this year's award together with the one for 2019 itself.

​Sara Danius, a 56-year-old Swedish literature historian at Stockholm University, claimed the turmoil "affected the Nobel Prize quite severely," her resignation becoming the first by a permanent secretary in more than 230 years.

Proud of Swedish men and women standing up for sisterhood! We have had enough! We will never more be silent! #knytblus #svpol pic.twitter.com/WWxIiwWIP8

​Following her resignation, mass protests in her support broke out across Sweden. Additionally, many politicians and members of the academia sported so-called "pussy bows" in support of Danius. This token of support, however, has been met with negative reactions in the social media.

​The Swedish Academy is an independent cultural institution, founded in 1786 by King Gustaf III in order to advance the Swedish language and Swedish literature. The Academy has also awarded the Nobel Prize in Literature since 1901.