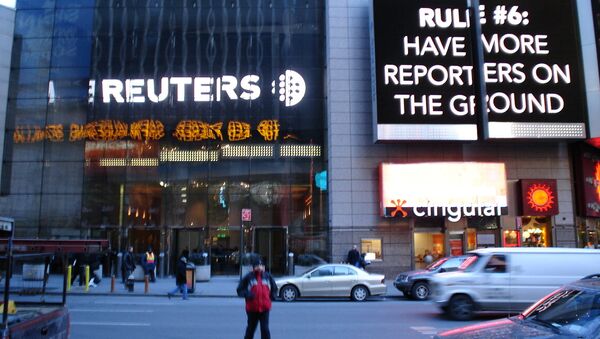 CC BY-SA 3.0 / Eternalsleeper / Street scene in New York City
Subscribe
Reuters has claimed to have information about Russian private contractors, purportedly fighting on Damascus' side in Syria, moving to an army base in Russia. Russia says that its nationals who may be in Syria are not part of the Russian armed forces. Radio Sputnik discussed this with Tim Anderson, a University of Sydney foreign policy expert.

Sputnik: What is the impact this video has had so far?

'Russia' Instead of 'US': Swedish TV Caught Peddling Fake News on Syria
Tim Anderson: I don’t think it’s been too much, except trying to stir up some illegitimacy of Russia’s presence in Syria. I think the reality is that Russia is going to participate in a number of infrastructure and petroleum projects in Syria and I think that the US, UK and Reuters are just jealous about it.

Sputnik: Do you think this is going to result in calls for additional military action in Syria or any kind of escalation of the military conflict there?

Tim Anderson: [The West] has been doing this for more than seven years now. […] The US, the UK and France  are always looking for a pretext, but I don’t think this one will add much more than that.

Sputnik: Is there any significant difference between civilians and government-sponsored armies in terms of international law?

Tim Anderson: There are some differences in the law, of course, but as I said, the US and the UK are the leading proponents of using contractors for a whole range of things, such as security, prison security, etc. So Russia is using civilian contractors too.

Sputnik: To what extent has media coverage affected the Western allies’ response?

Tim Anderson: I think that in terms of a pretext for war the media has been extremely important during the seven-year Syrian war. […] The US and the UK are the major sponsors of the White Helmets, who put together the film about (the alleged use of chemical weapons] in Douma. The White Helmets have been funded to the tune of about $100 million dollars as some sort of a PR-agency/medical support for the jihadist groups. There are a number of media groups and NGOs being paid by the US. There is a wide framework for a propaganda war going on during this particular war [in Syria].